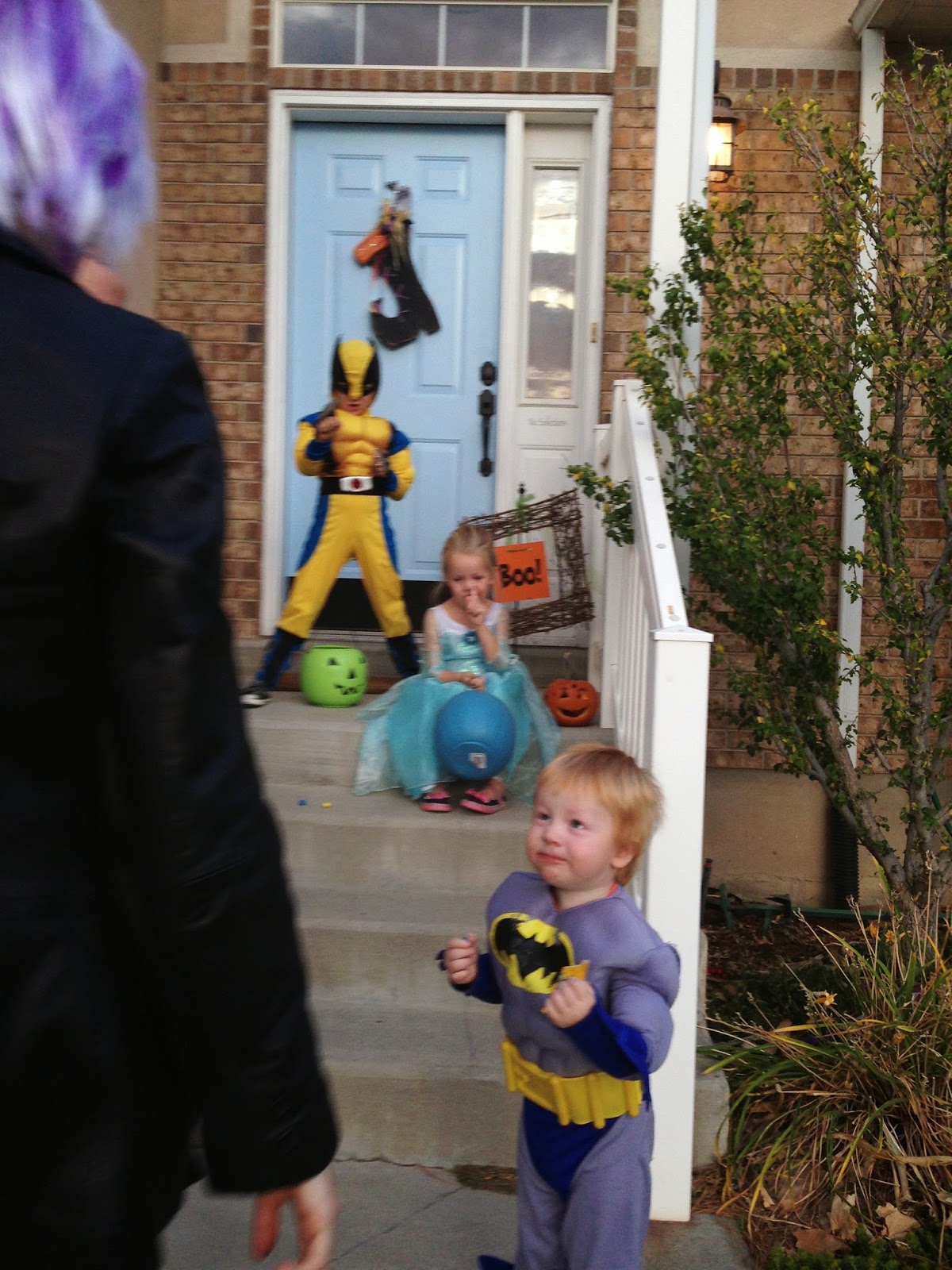 {this picture. it makes me laugh.}

dear beth,
when i received your letter a couple of weeks ago, i was feeling sorry for myself. i know, awful! but, it's true. mostly because brennan had been on this lying phase, and i was just feeling like a loser mom that kept failing and failing with everything i was trying. so when i read your words, you truly lifted me up woman!!! i mean, i just can't express how amazing i think you are. UH-MAZE-INGGGGGG. president uchtdorf is one of my favorites. whenever life is overwhelming to me i remind myself of his talk about flying an airplane through turbulence. do you remember that talk? he said that to get through turbulence, one might think that you would get through it faster if you just sped up, BUT this is wrong! in order to get through turbulence most safely and effectively, one must SLOW DOWN. this was like a firecracker going off in my brain. i immediately thought of my life after having chase. brennan {who we didn't know had adhd at the time, but now looking back it is so clear} was only 4, little miss max was 2, and then there was newborn chase. i remember thinking that i was not going to let a newborn slow me down. we had swimming lessons to get to, and i had two other kids to entertain. i didn't have time for a slow nurser that couldn't latch! i didn't have time for no milk and a baby that took 5 minute car seat naps. i needed to go, go, go, go, go. how ironic it was that chase was BY FAR the one baby that FORCED me to slow down. his personality would not be rushed. it is just so him. oh how i wish i would have heard pres. uchtdorf's talk right in the midst of all of that, but then maybe i wouldn't have "heard" what he was saying. perspective in these situations is so clear when it's behind you. so every day, when my life is going through change and chaos, and i start to feel the need to "keep up" with the momentum i think i should be going at, i stop and remind myself that when times are turbulent, it's best to slow down. this is hard for a gal like me that sets high expectations for herself, but i'm getting better! one must put the breaks on to make the path less bumpy. i just can't tell you how many times a day i think of that talk. i keep thinking i need to type up the paragraph and pin it to my fridge, or my wall, or something like that, so i can see it always. 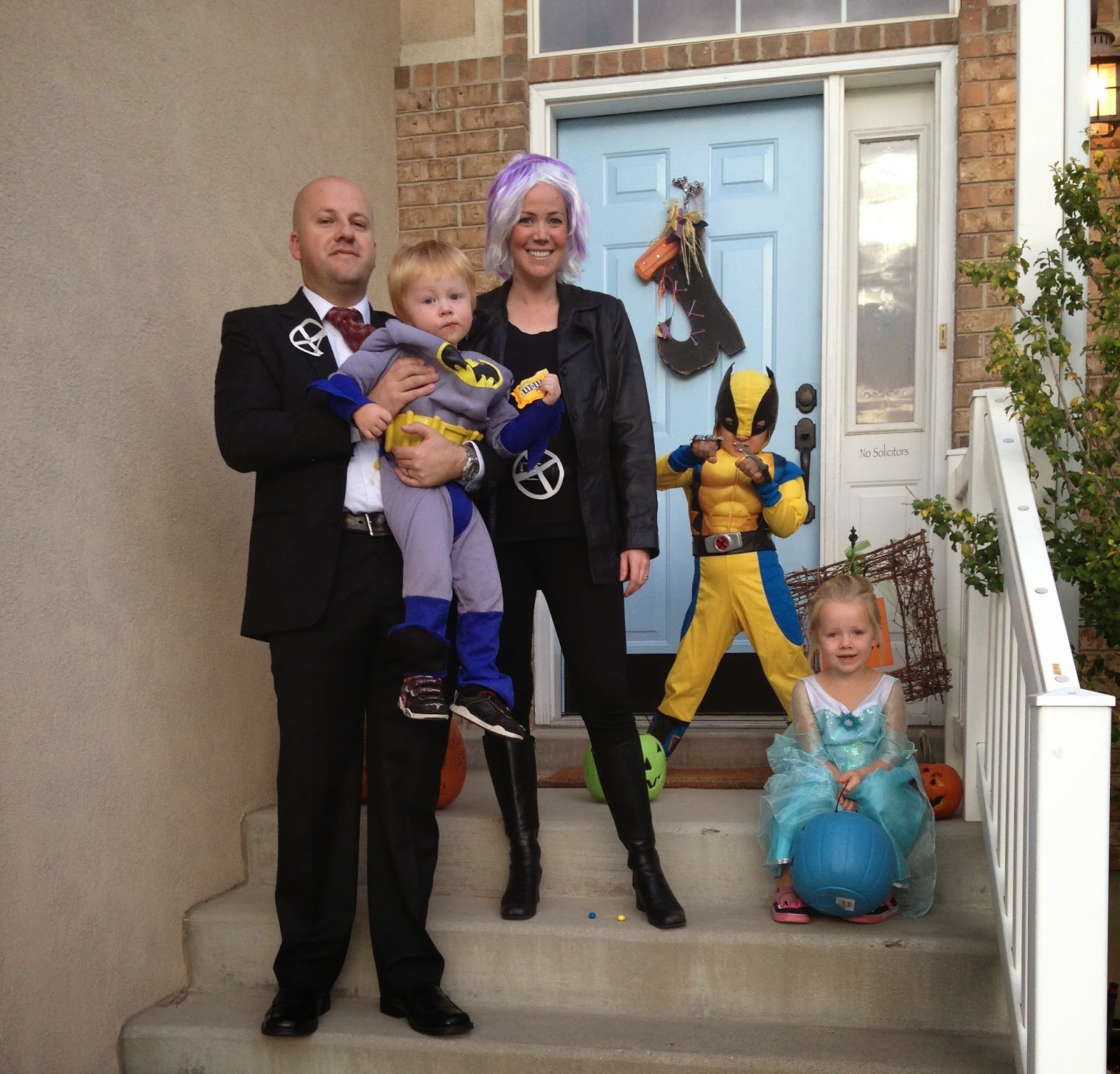 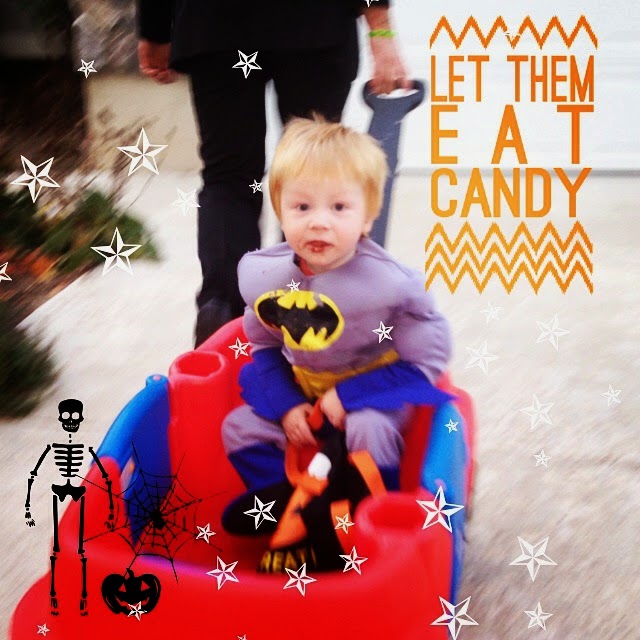 this one spent the night riding from house to house in the wagon and eating candy after candy out of my old trick or treat candy bag my mom saved from elementary school. at every house he would run up yelling "TICK OR TEET!!! I batman! Tank Yoooooo!" and then it was back into his wagon again. 2 yr olds are my favorite halloween people. no frills. just happy. 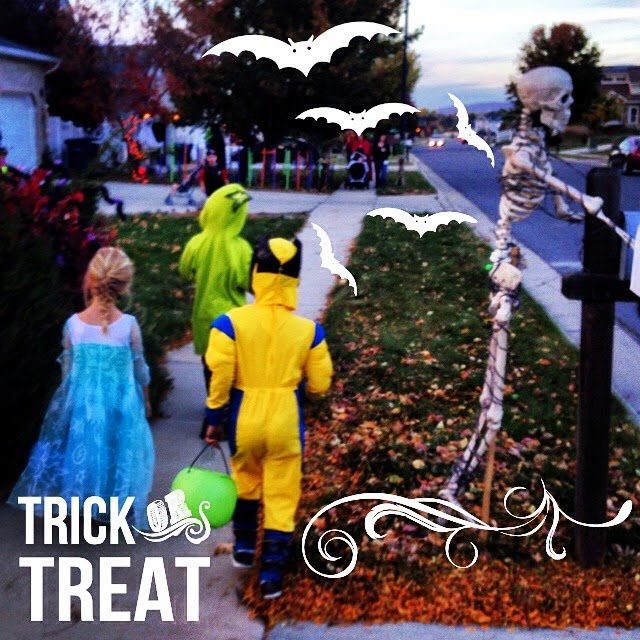 brennan is already asking to go off with his friends alone. i told him you have to be 10 or 12 or something way older than 6 and a 1/2. i'm treasuring these years of walking behind my babies with their pumpkin buckets. i leave a giant canning pot of candy on my door unattended every year so we can all go around together. pure bliss! 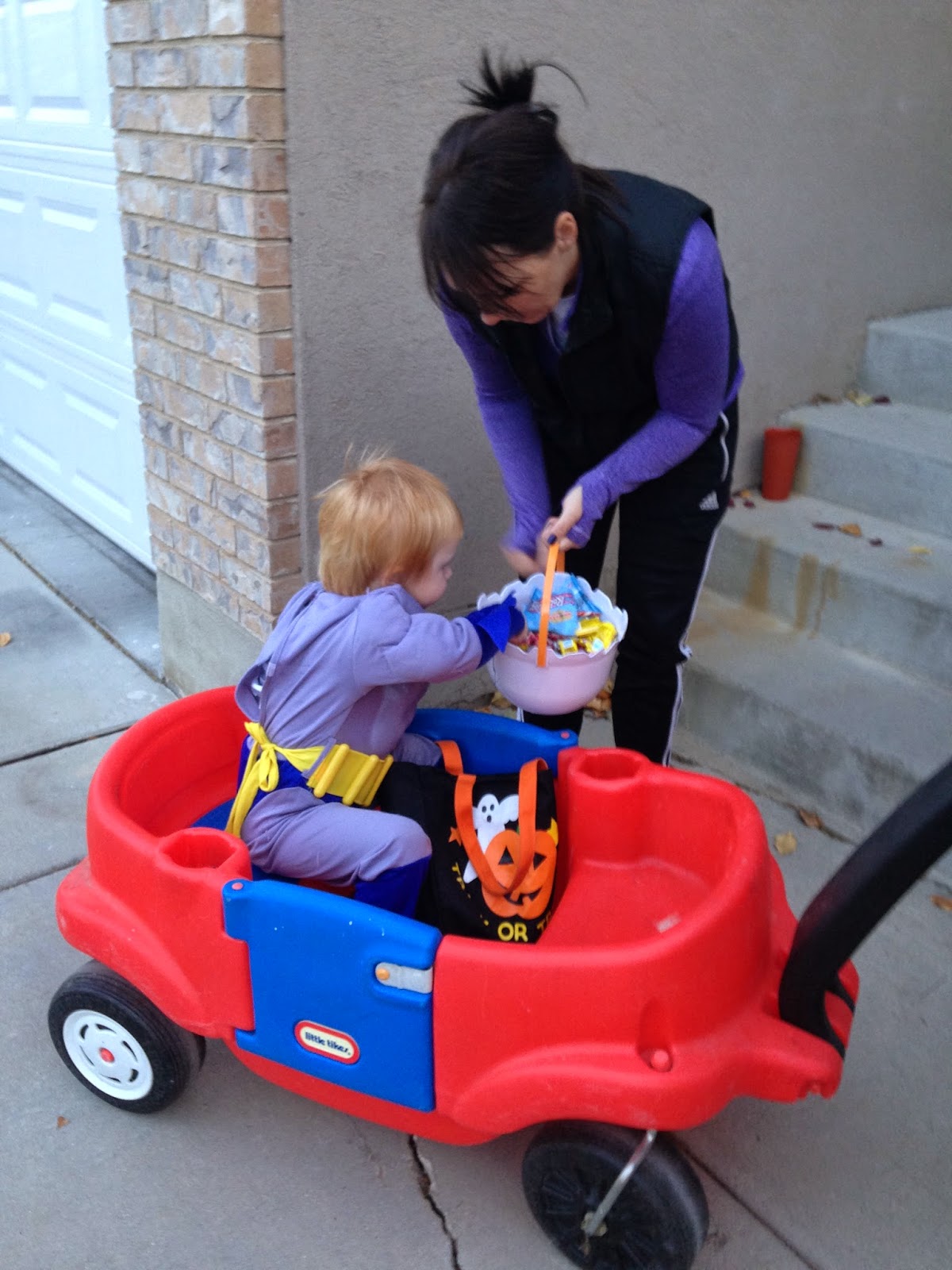 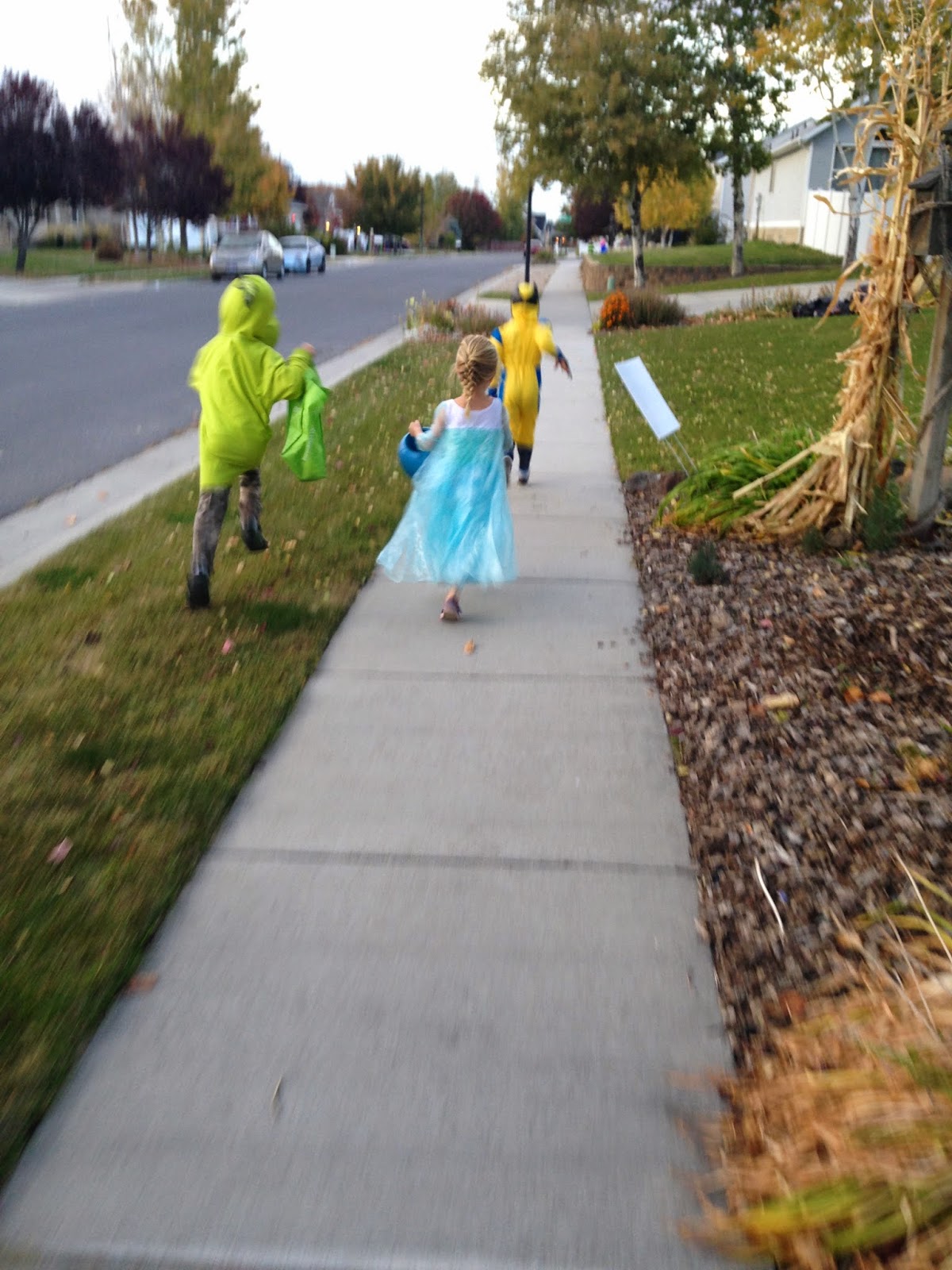 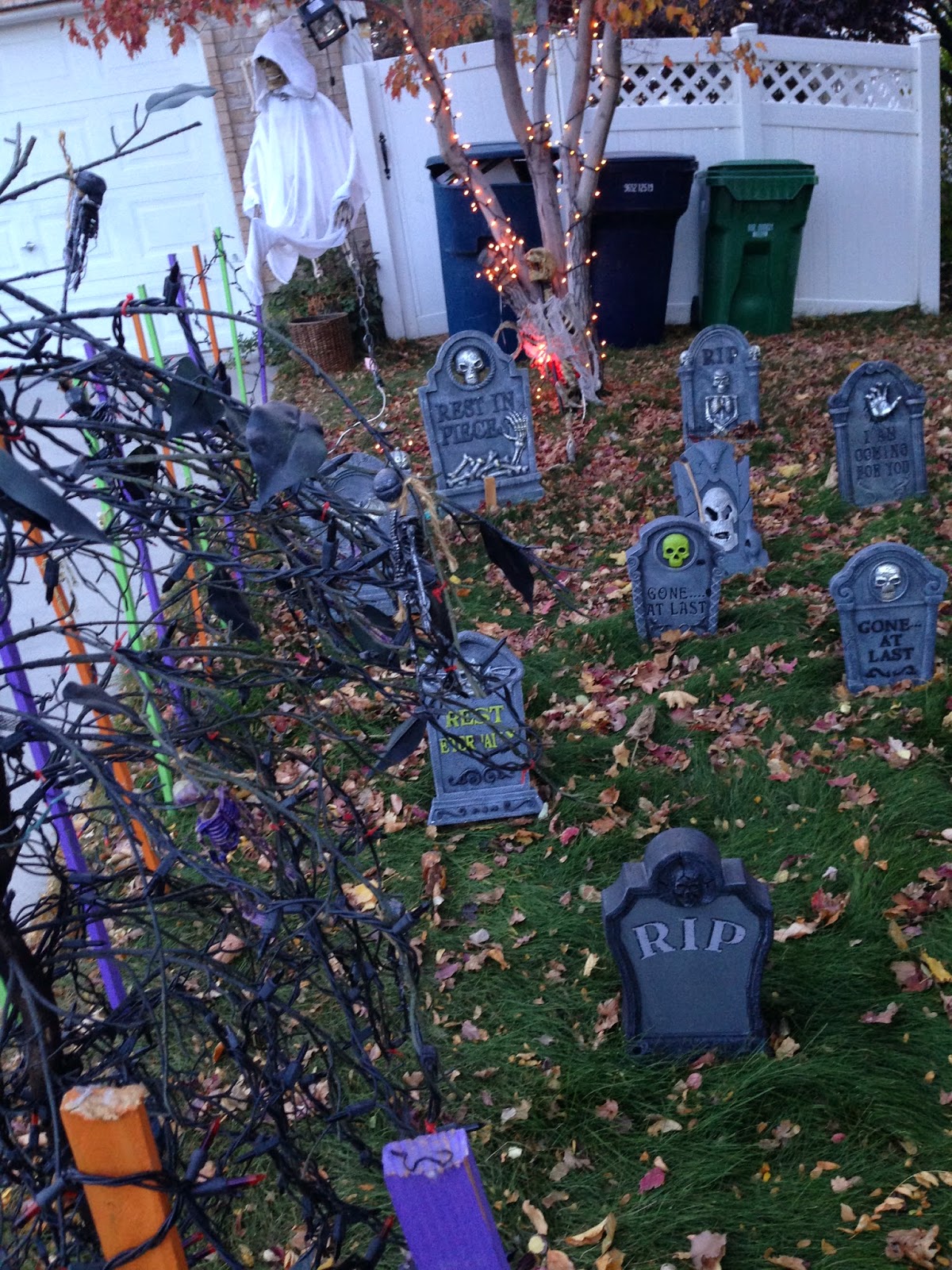 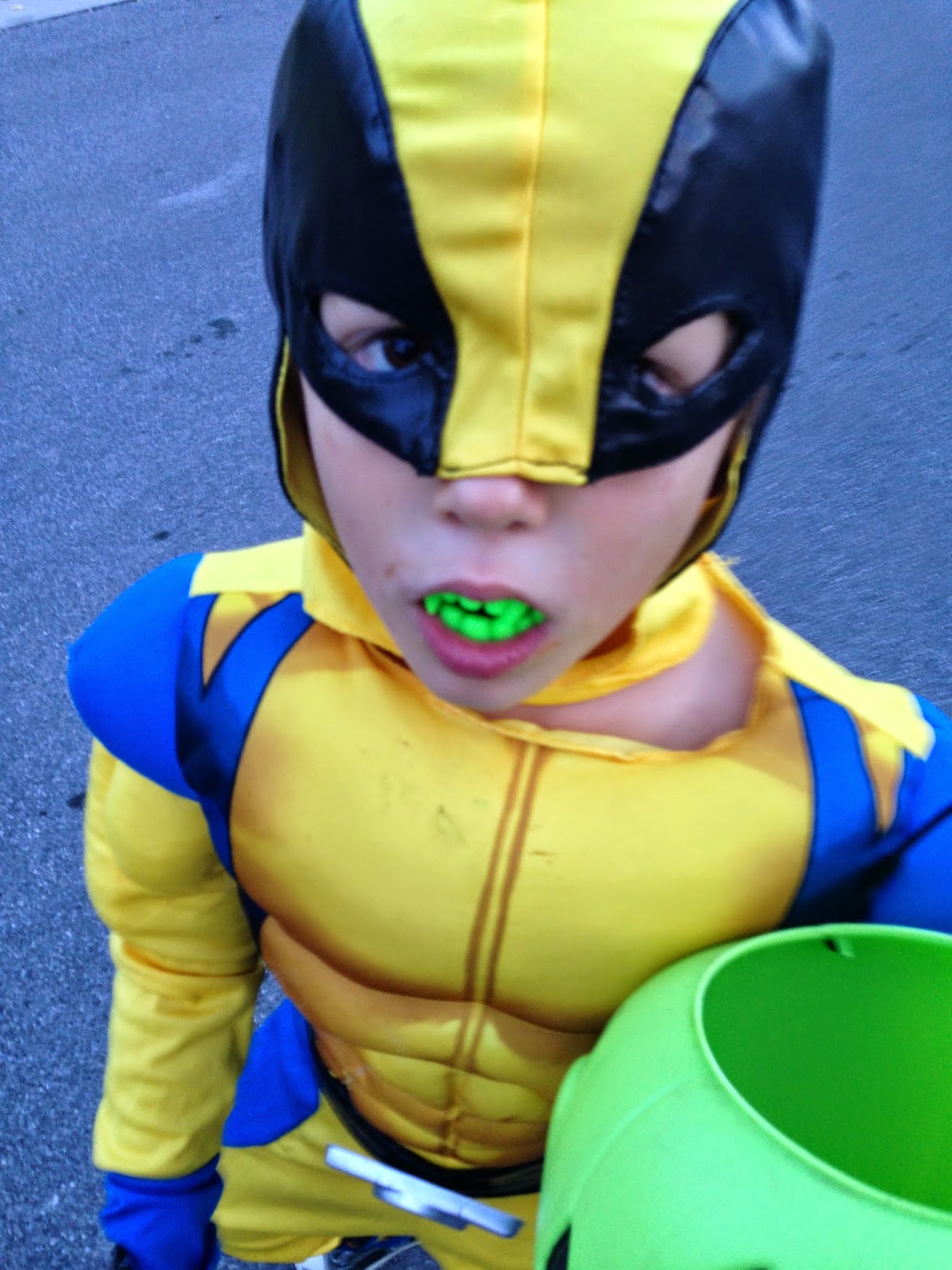 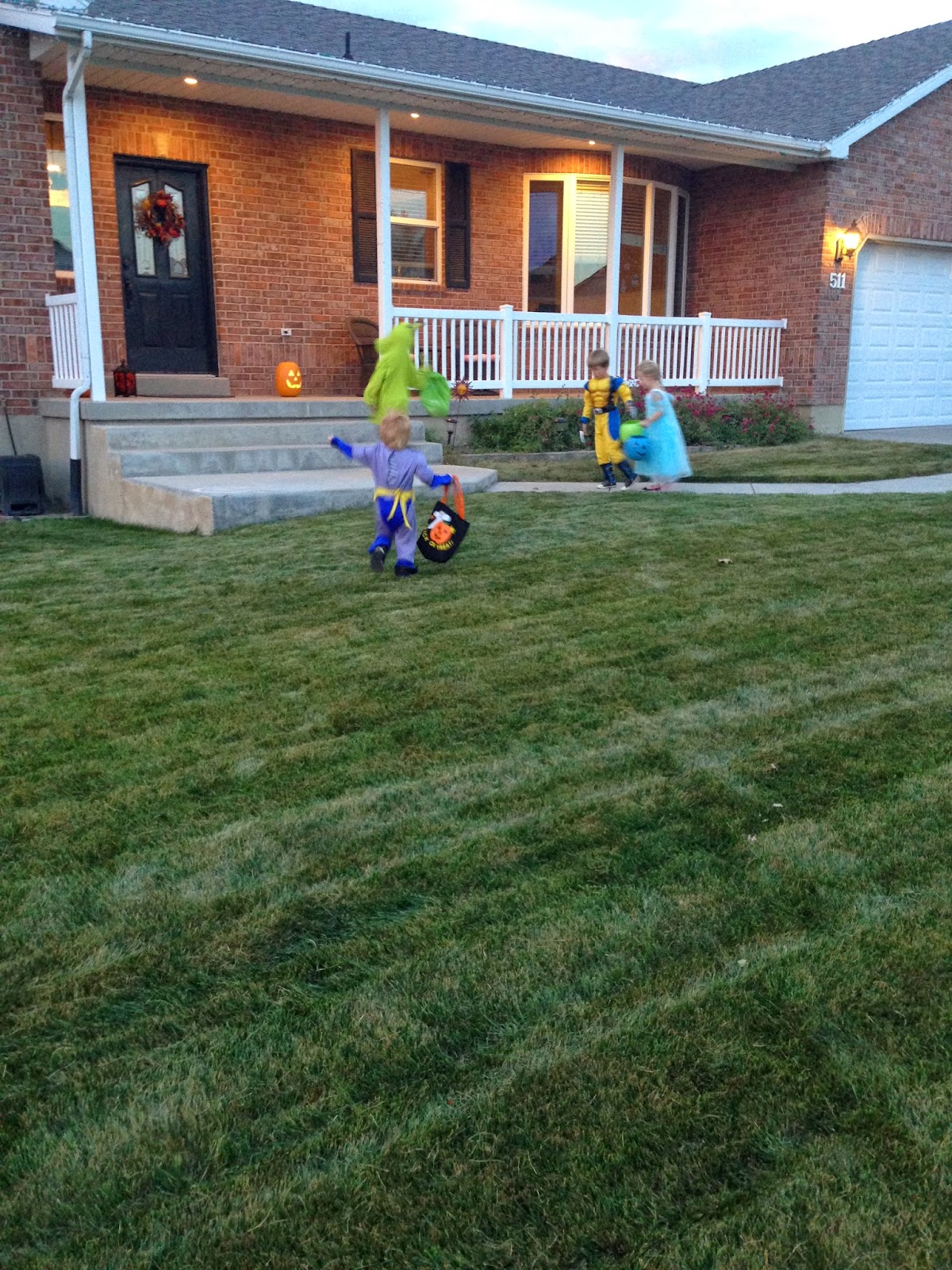 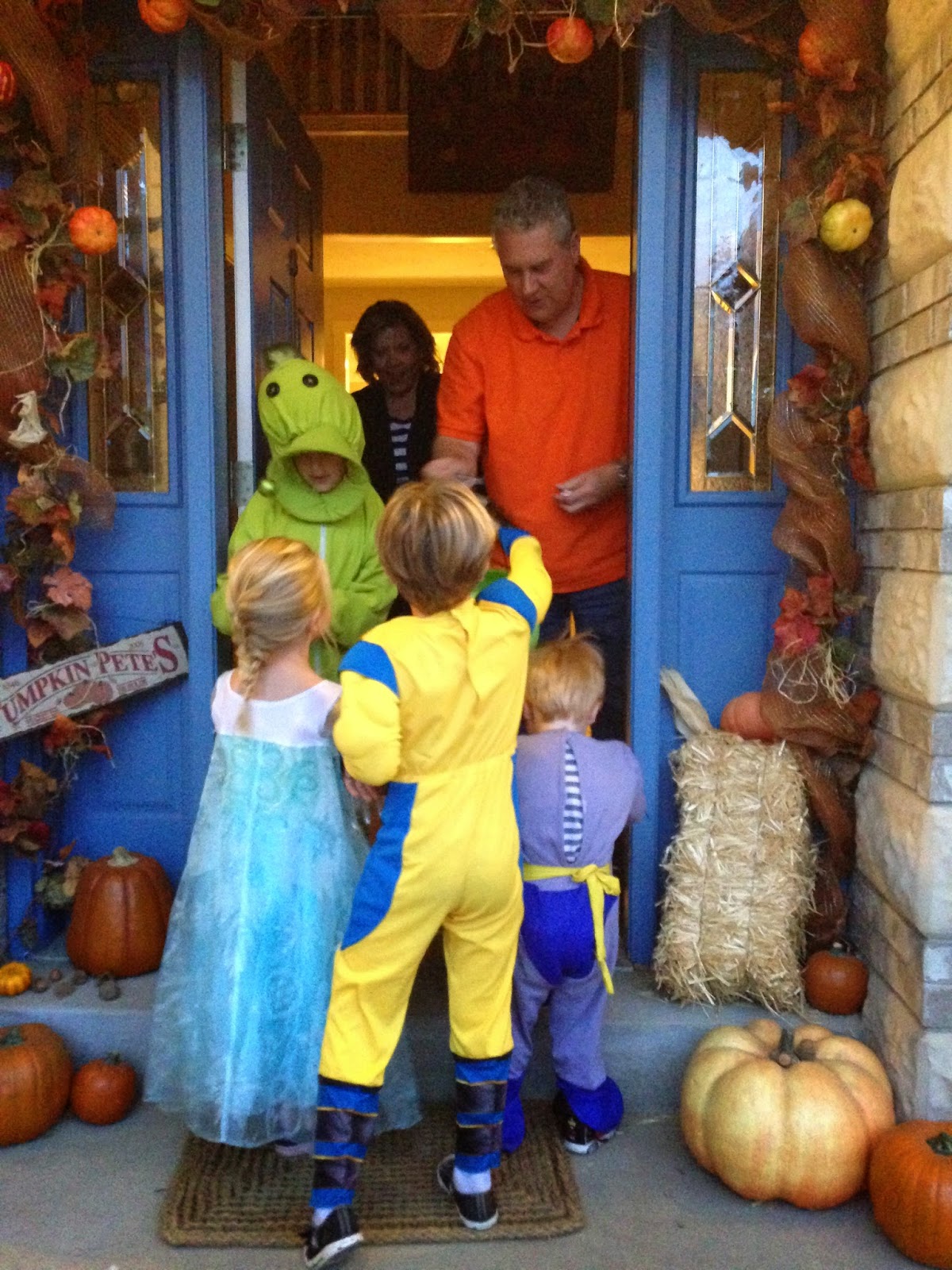 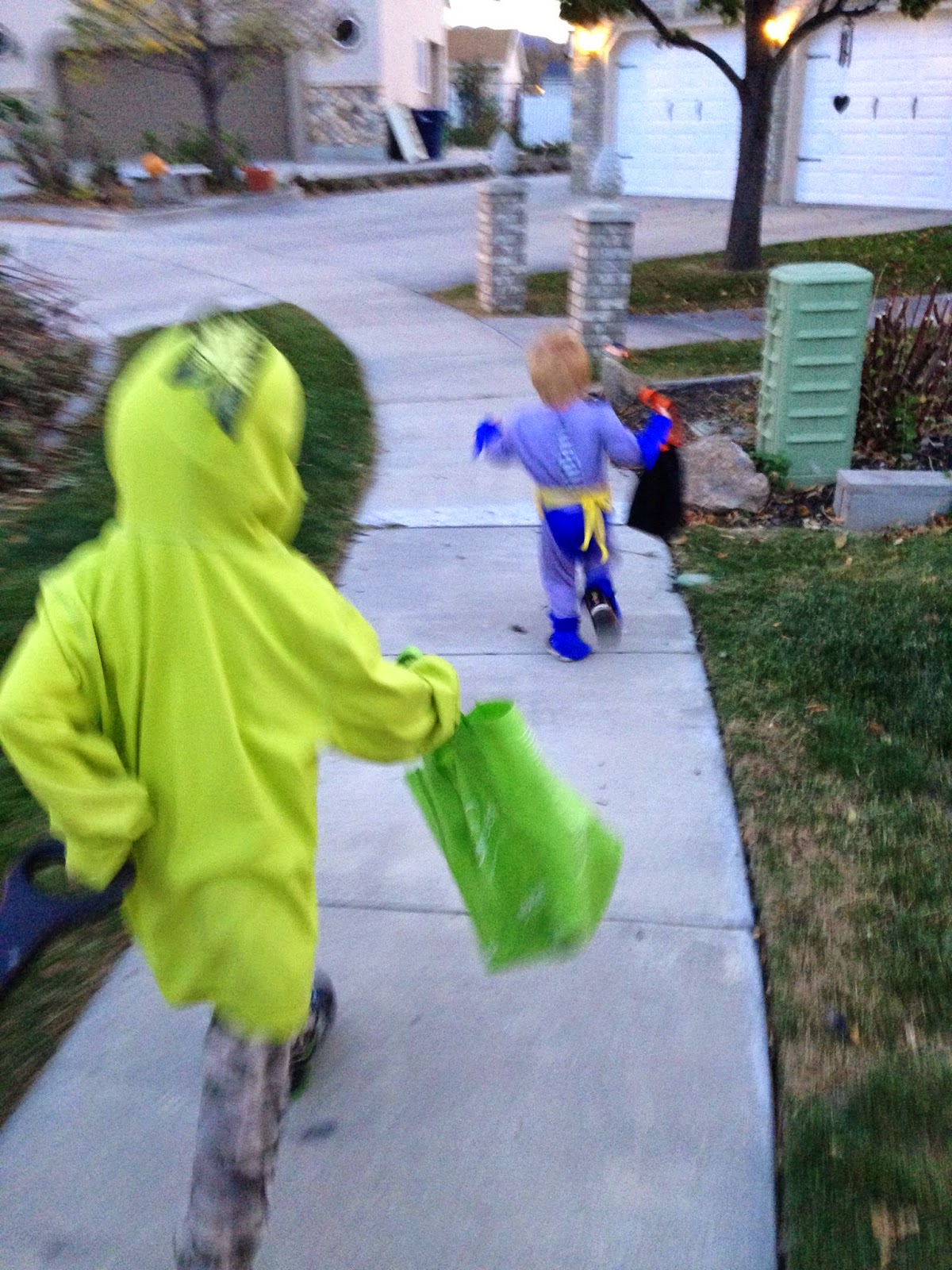 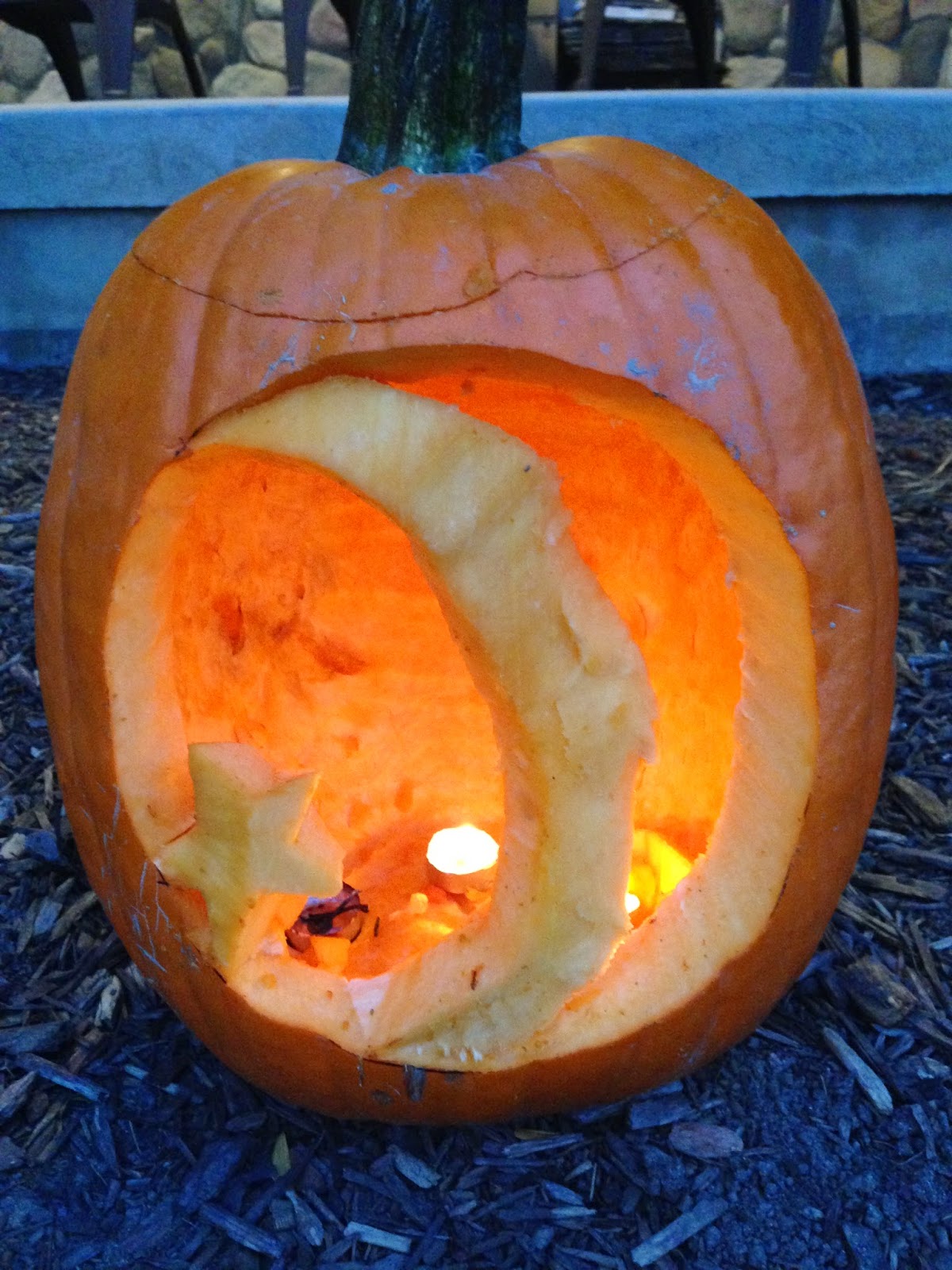 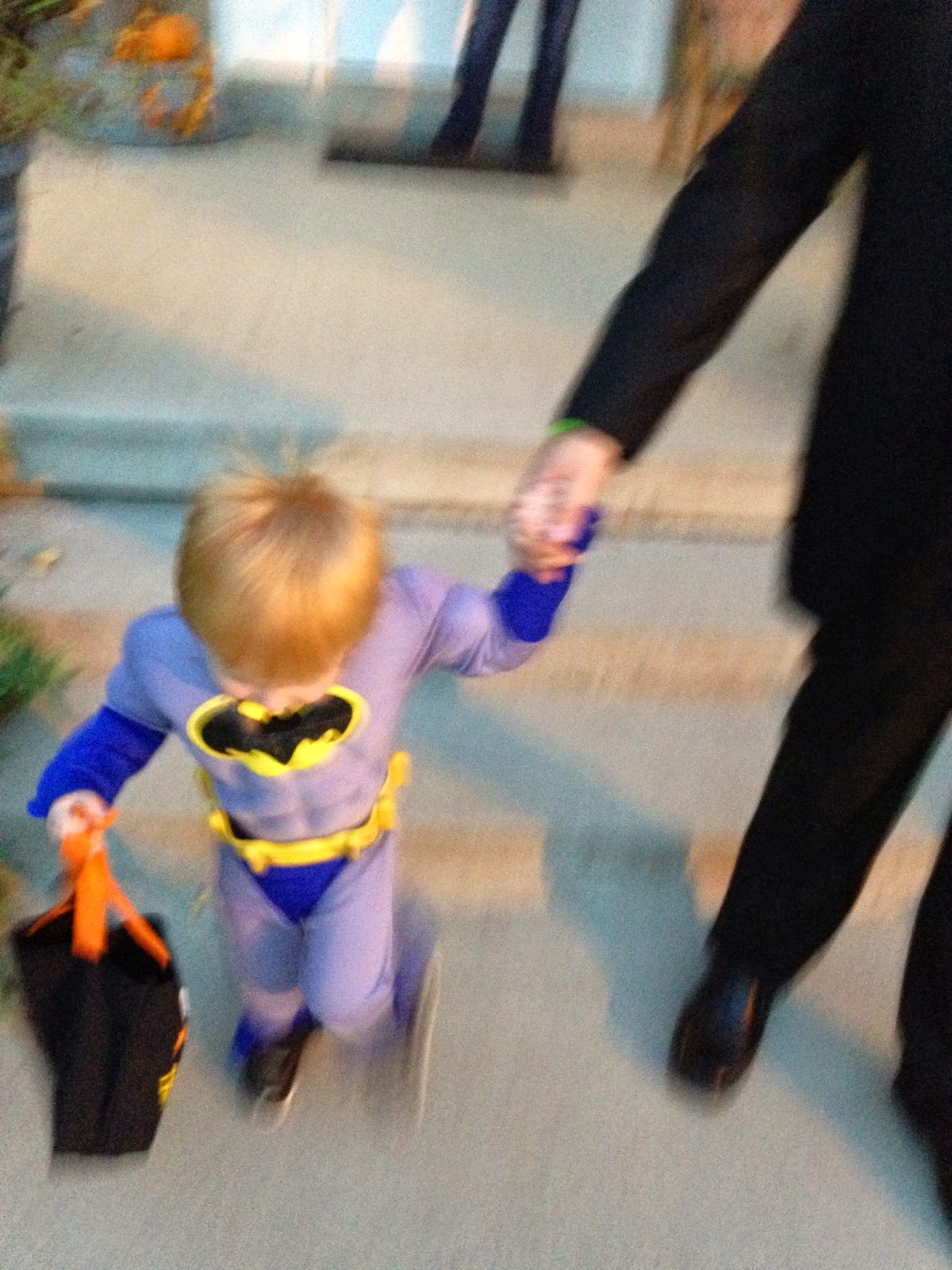 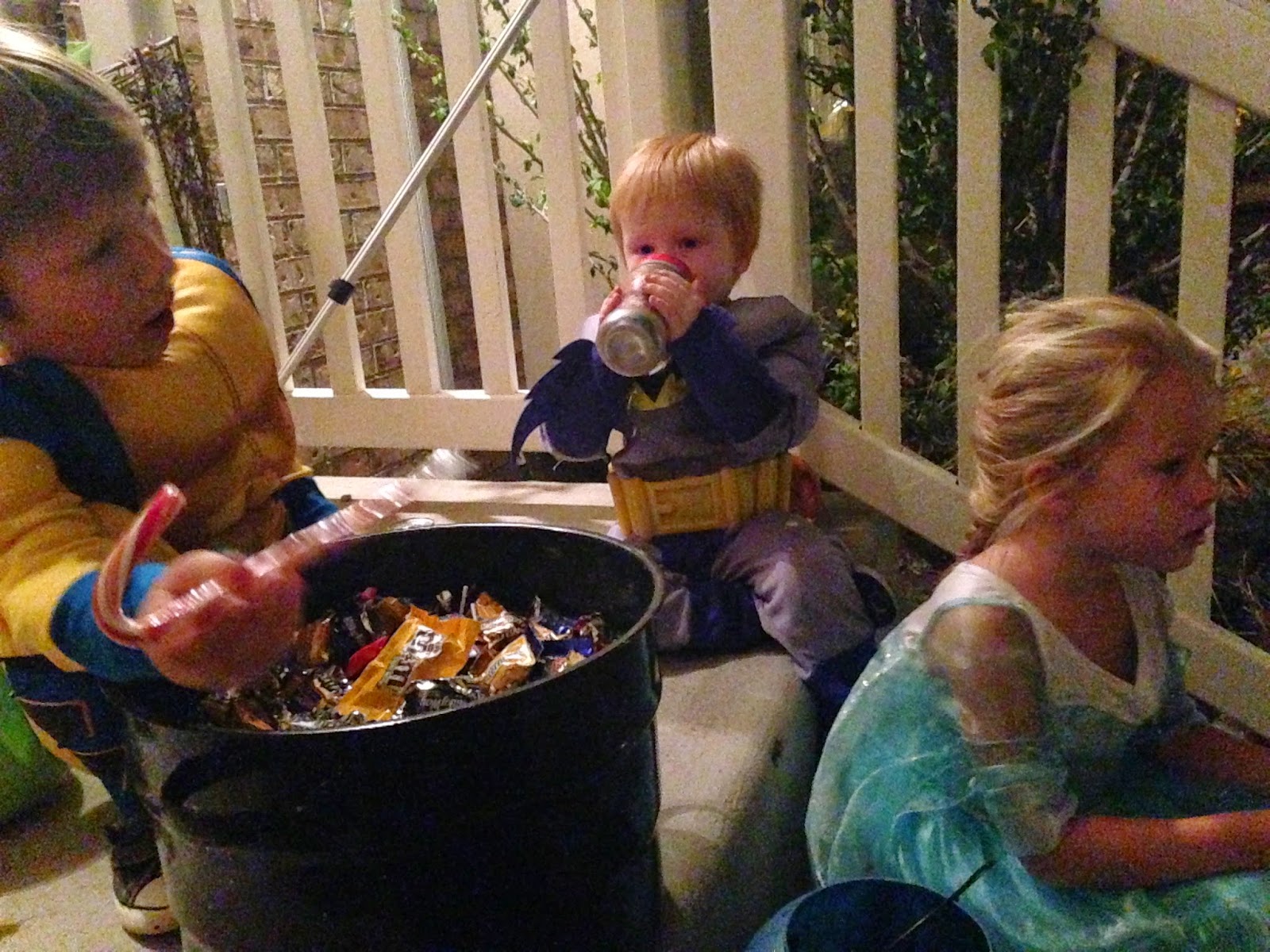 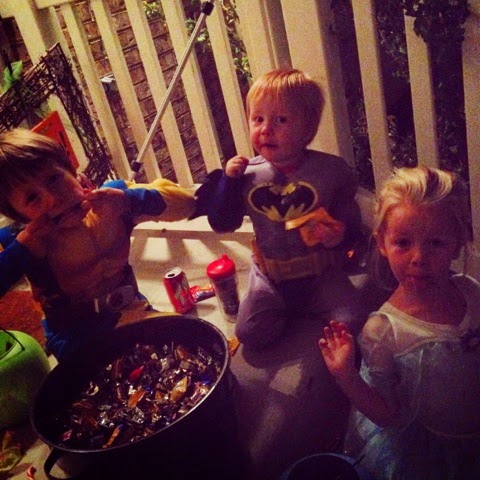 {it was freakishly warm this year, so after 2 hours of trick or treating and hitting every house in the entire hood, we all ended up on the front porch eating and together passing out candy to all of the "teenagers," who my kids consider to be anyone over the age of 10. i let them eat and eat and eat and eat, then we showered them all off, and everyone planned their costumes for next year with visions of drumsticks in their brains. it was probably my favorite part of the entire day.}
...
in other more humorous news...we have mice. this is the story about how i found out we had mice. you know those cute corn stalks i put on my porch every year for halloween and thanksgiving? 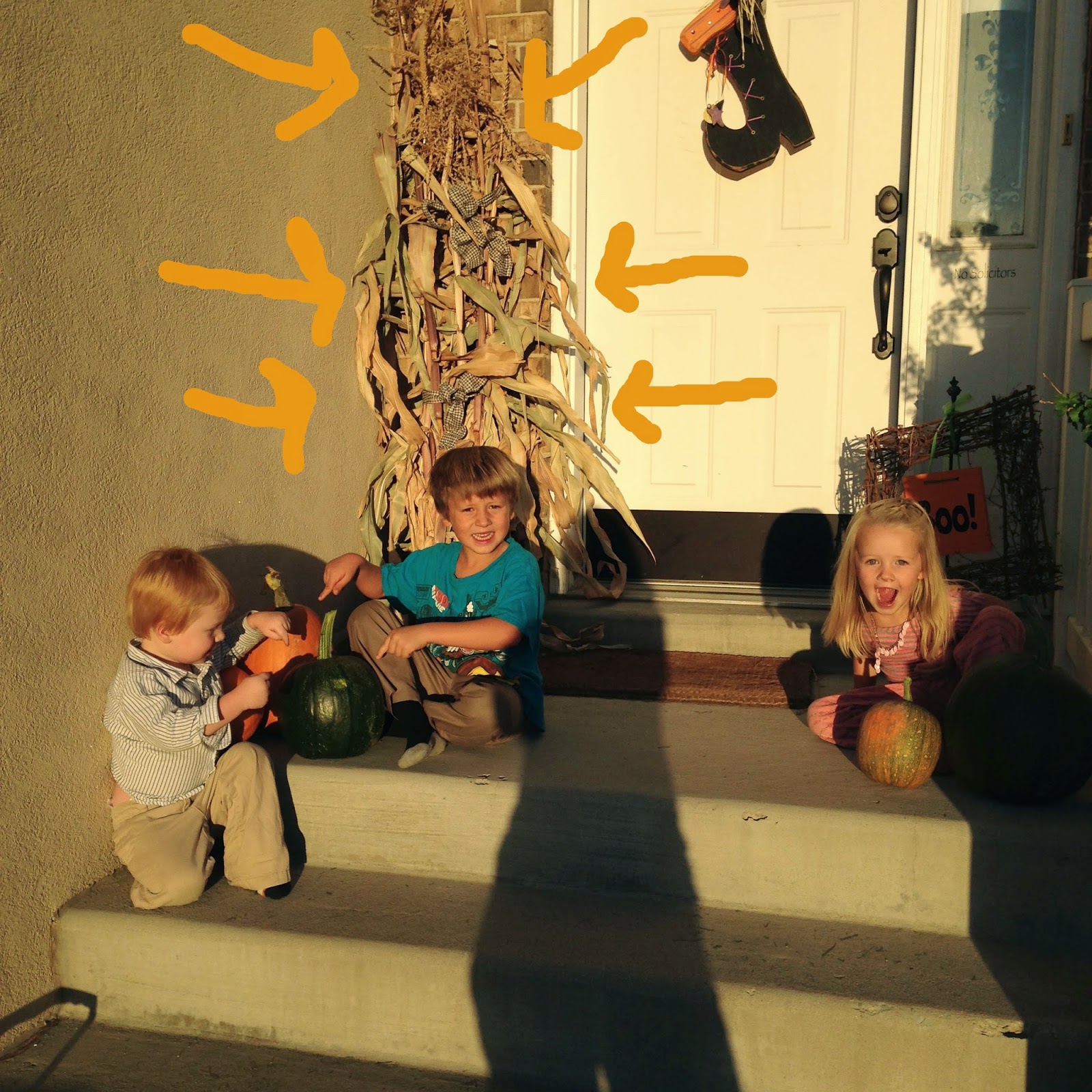 well, THIS YEAR i had this FABULOUS idea to leave some corn on the stalks! i peeled them down and tied each little corn cob all cute. it was so very festive. i was living in corn stalk fall happiness! then a few days before halloween i decided to finally paint my front door blue. Morocco blue. i've been trying to talk myself into it for two years now, bought the paint on labor day, and took the plunge during our unseasonably hot october weather as i said, a few days before halloween. i LOVE my blue door {not pictured above}. anyway, so as i'm taping off my door handles to paint: note picture below. 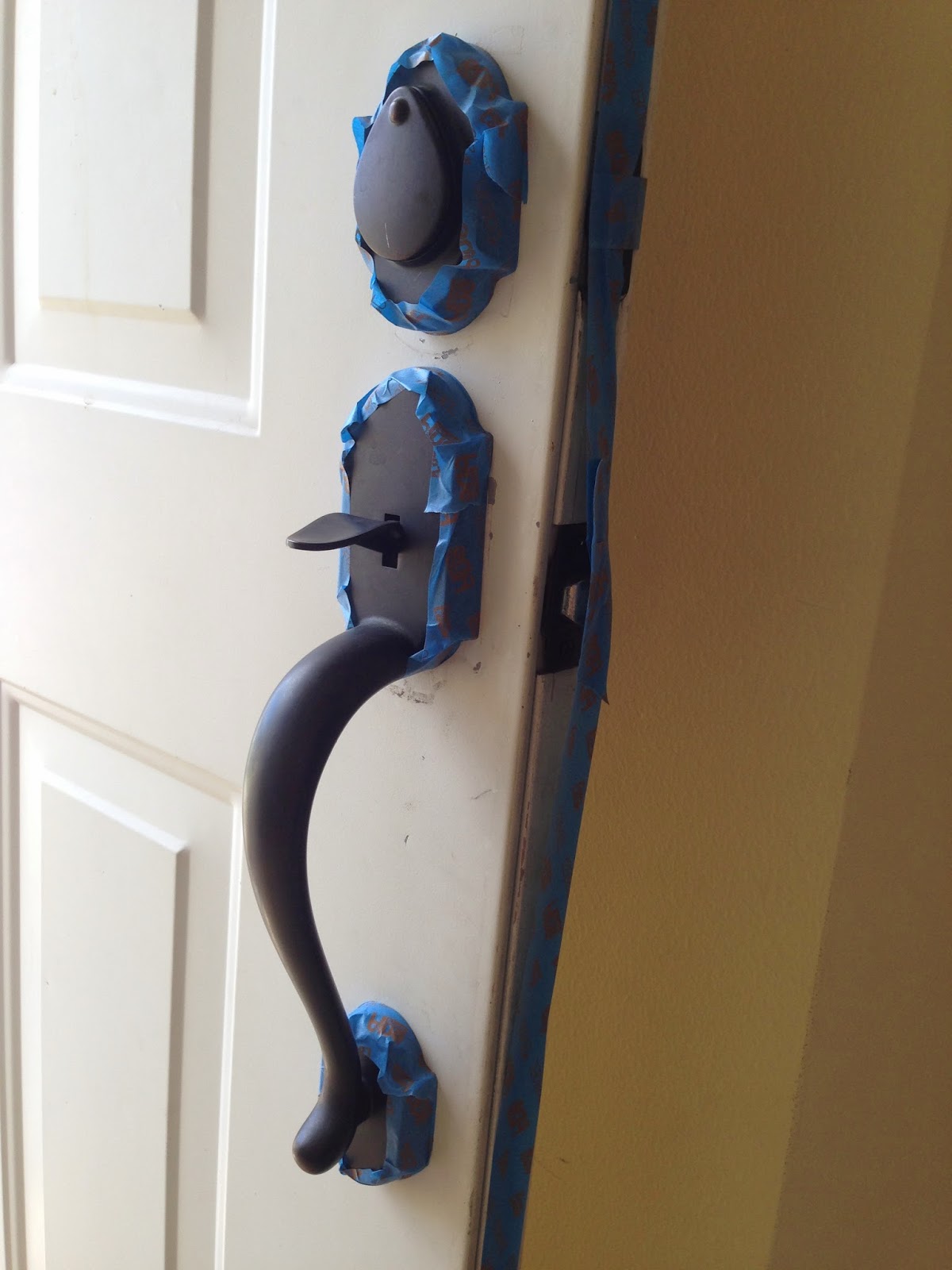 i see something dark grey "roll" also known as scamper across my front door stoop, and right into the corn stalk. it was an unusually windy day in the salt lake valley, and when i told sean something ran across the door he said "no, it's just the wind blowing something."
well, i have been known to hallucinate, but when it happened a SECOND time, i called my husband over to check the cornstalks,
WHEN
ALL
OF
A
SUDDEN
2 MICE
FELL
OUT
OF
THE
CORNSTALKS
and scampered down the side of the stairs and under the gaping hole there to their homes.
here i was feeding the mice like some petting zoo off of my front porch for a month and a half,
and thing i was most mad about was that sean told me the cornstalks had to go
LESS THAN A WEEK
before halloween.
i was devstated.
so he called his pest control guy,
who explained to him that these varmints only need a dime sized hole to get into your house once the weather turns cold {which is has today}, where they will eat and poop all over your food.
so with tears in my eyes, we moved the cornstalks to the side of the house {also not smart in case you're wondering, but they've since been moved to the street}, and now the mice are gone.
they ate their poison, and are most likely laying dead under my front cement stoop. i try not to think about that part mostly.
oh, i almost forgot,
because i had just spent OVER an hour taping my front door and TWO YEARS building up the courage to PAINT this door, i HAD to paint the front door,
but we didn't want the mice to run into the house, which were still running up to the porch searching for their smorges borg of meal i had so conveniently placed there for them,
so sean put up a wooden panel over the front door and we spent the whole day running from the garage to the door painting scaring them away every 5-10 minutes.
also, we borrowed susie's cat from down the street, who is named Cosmo {GO GOUGS!},
and after he sniffed around a little bit we didn't see the mice come out for the rest of the day after that. 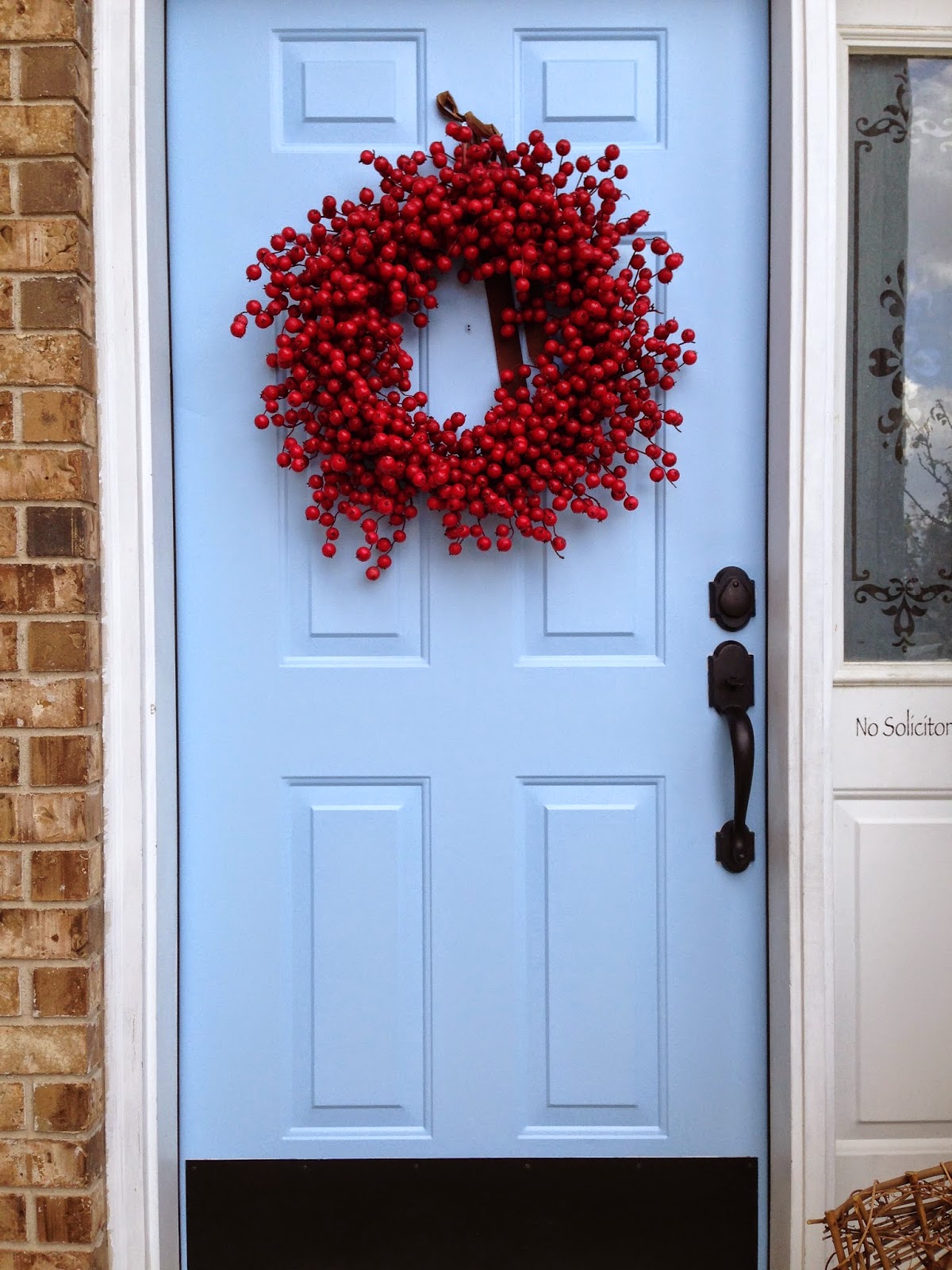 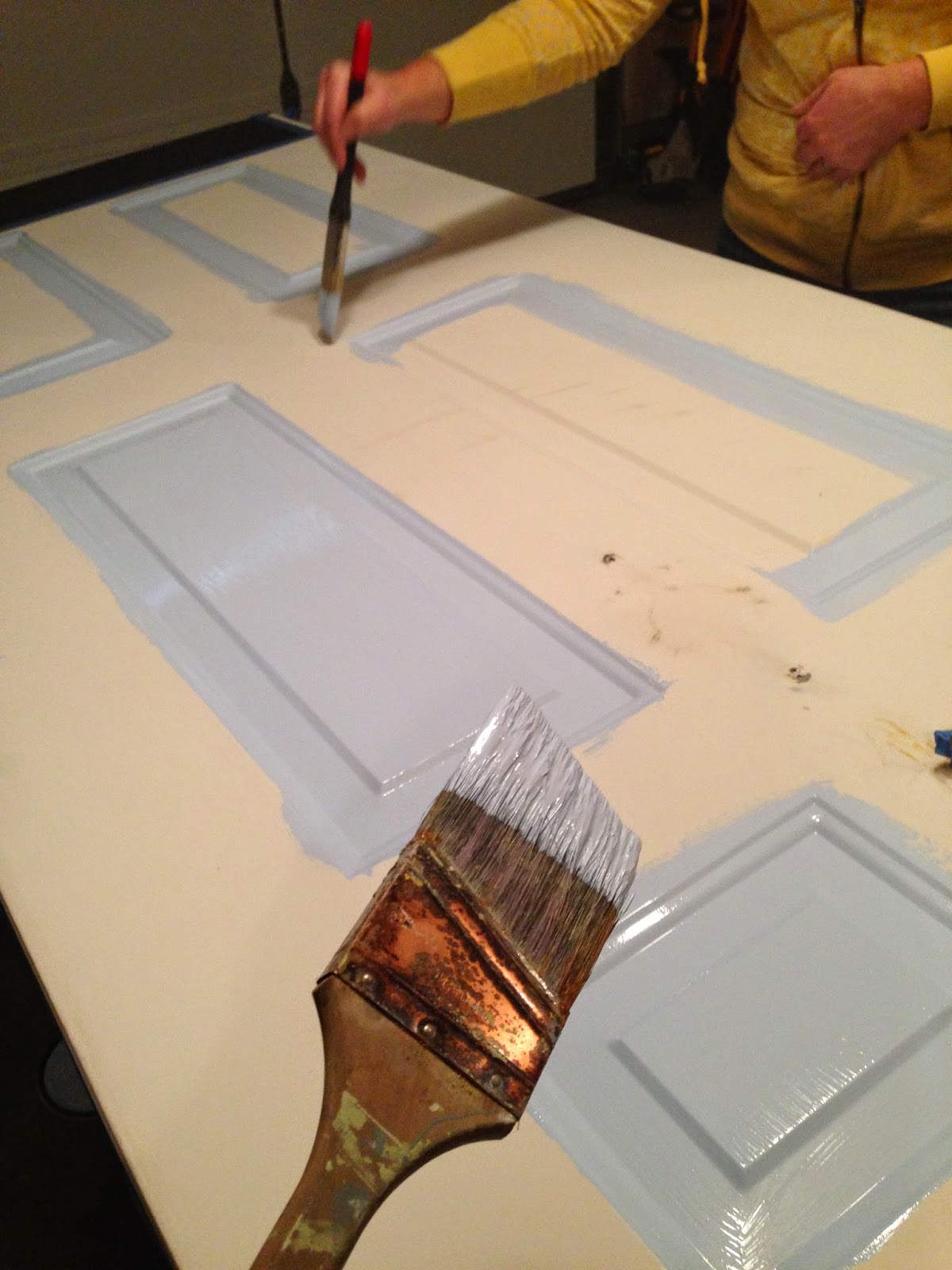 i also repainted my red berry wreath, so now it's all spruced up too.
i MAY have left a circular red blood stain on the ground of the garage that looks like someone died there. oops. 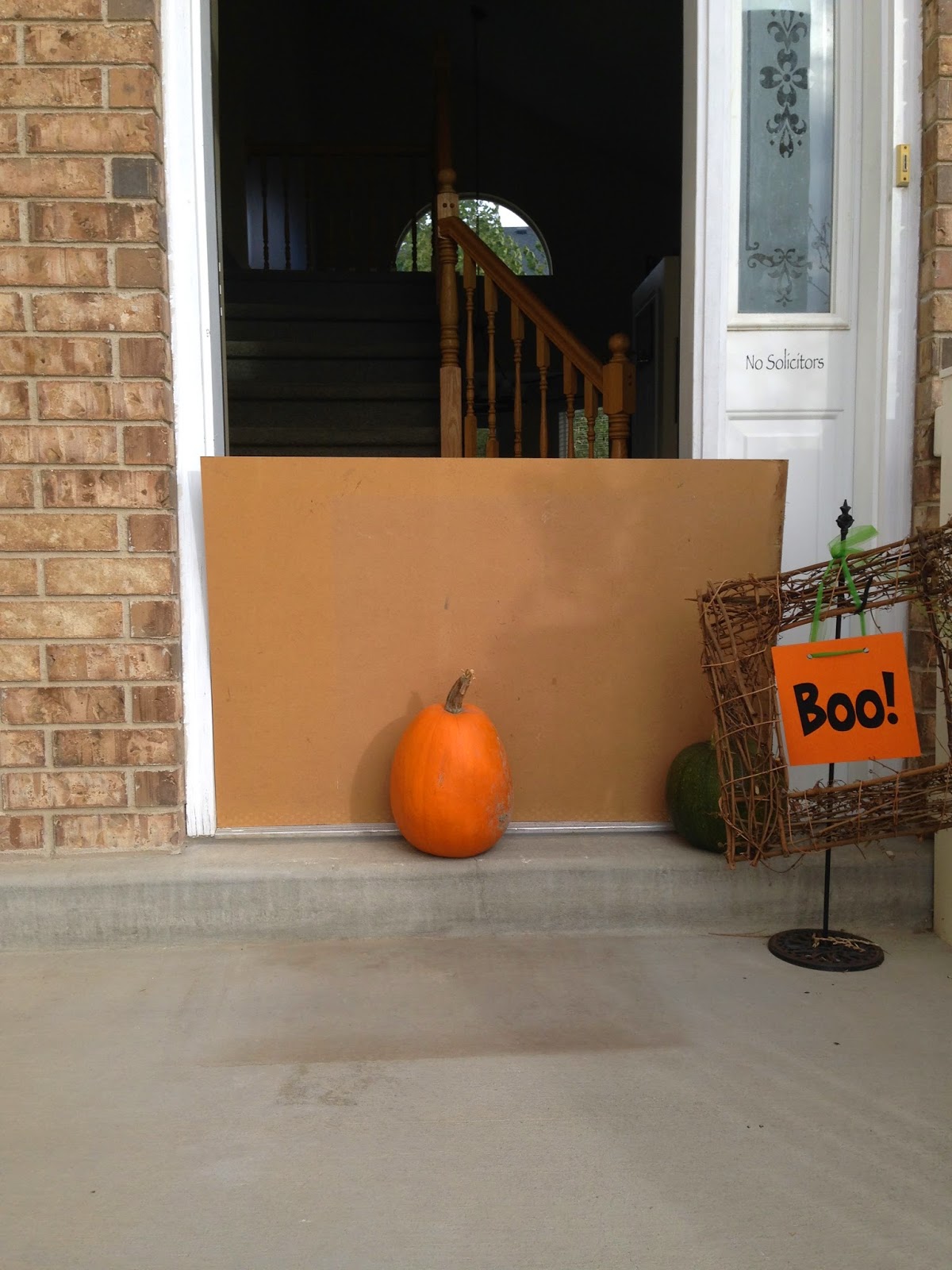 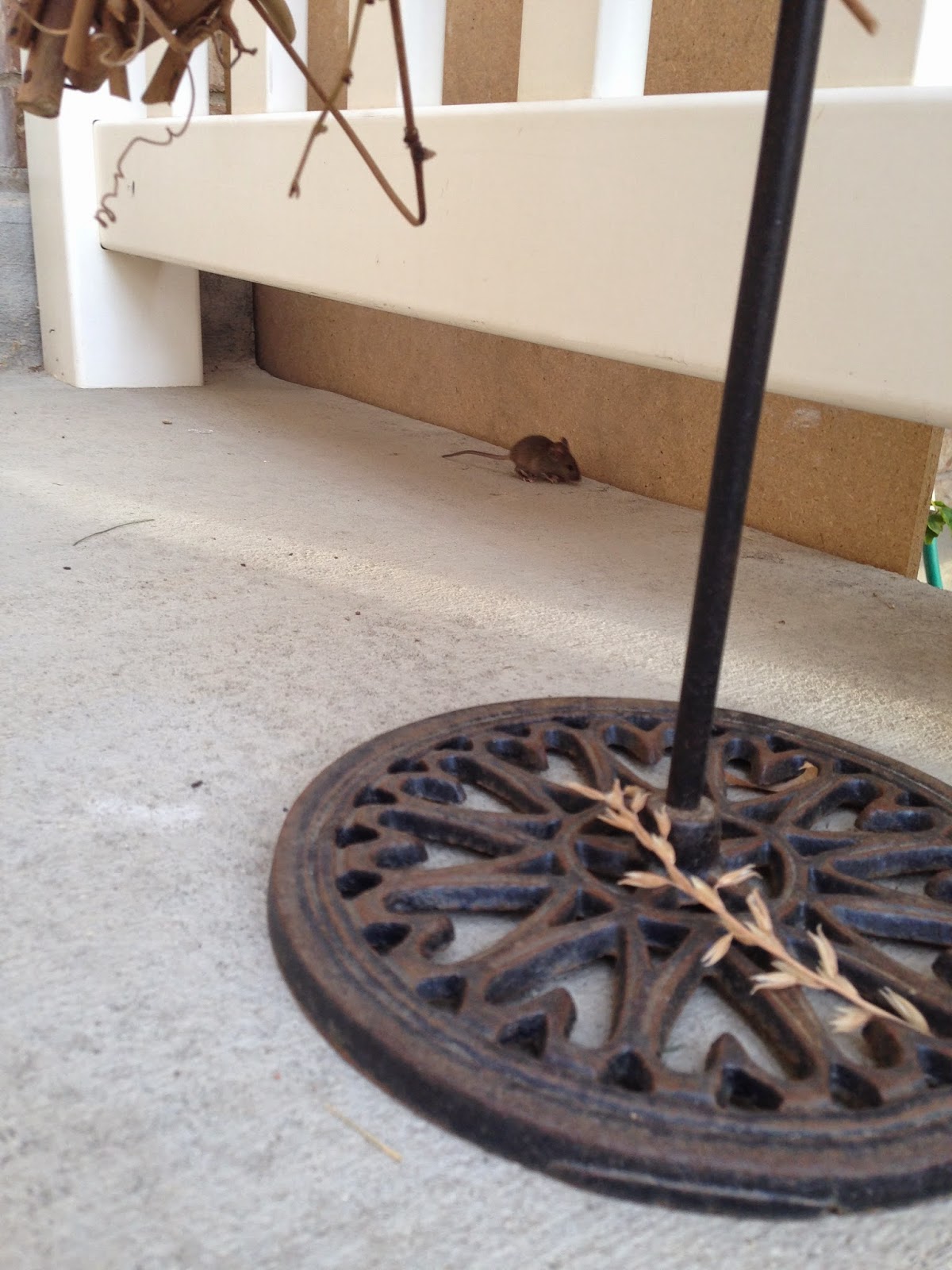 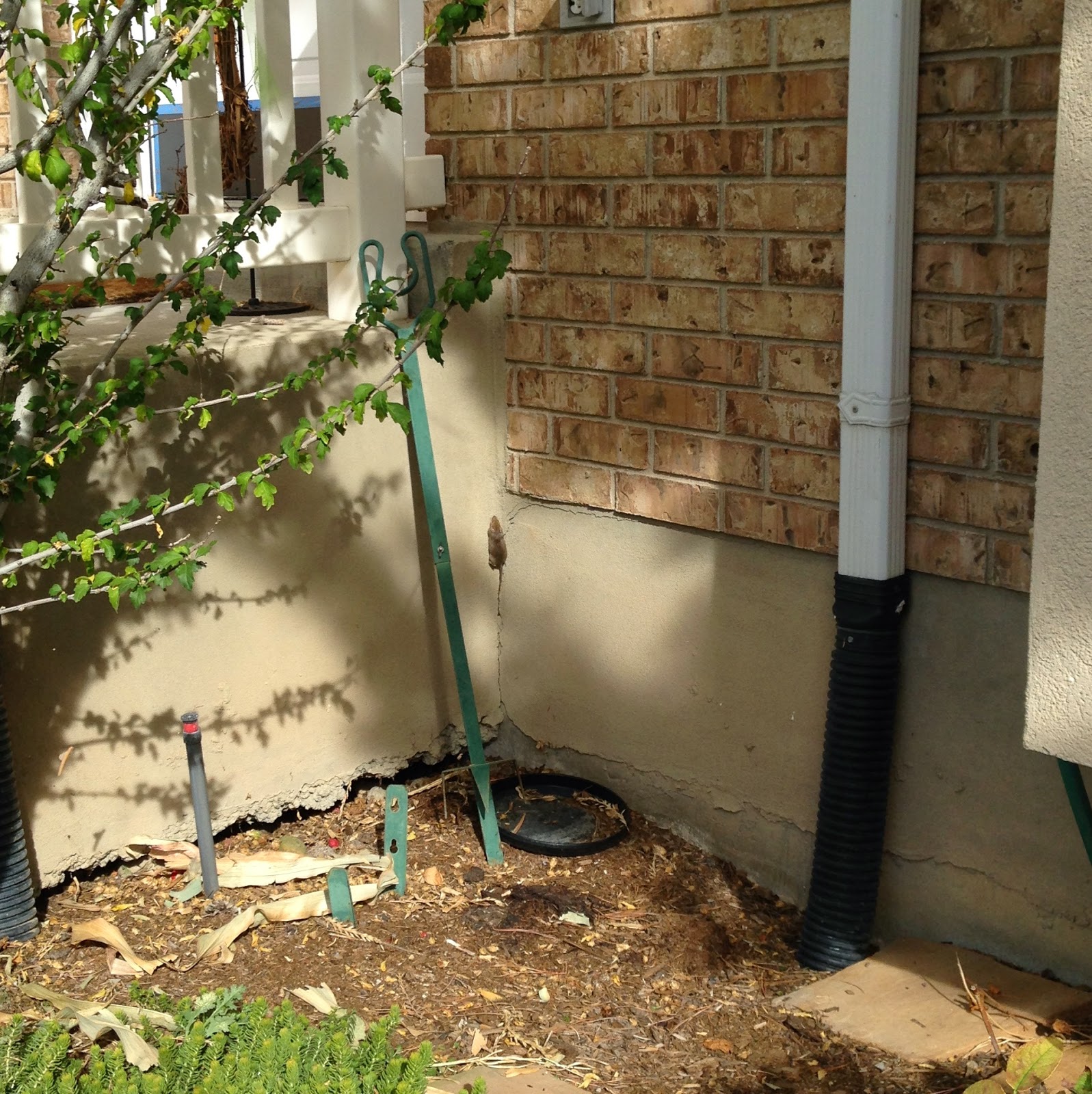 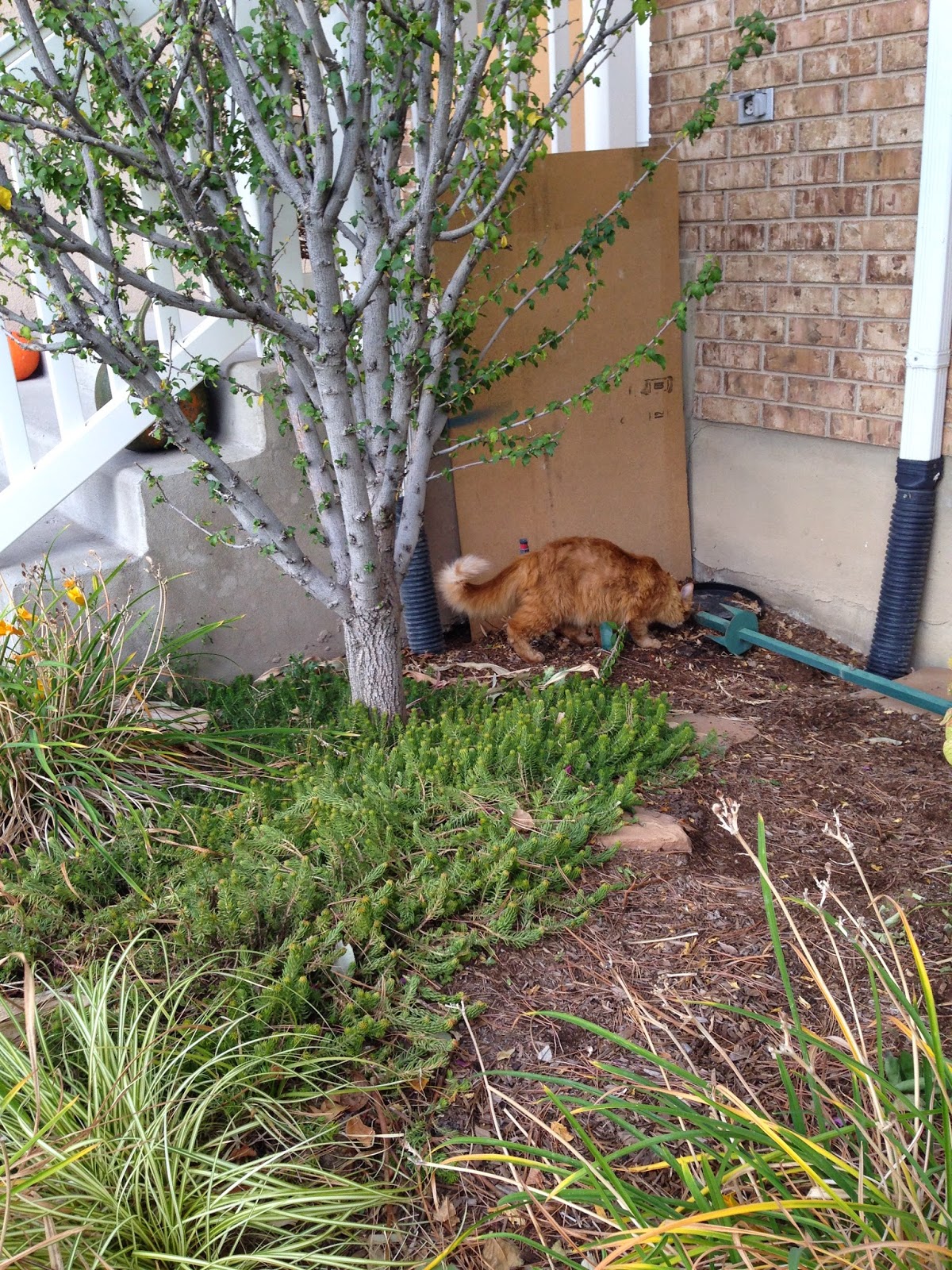 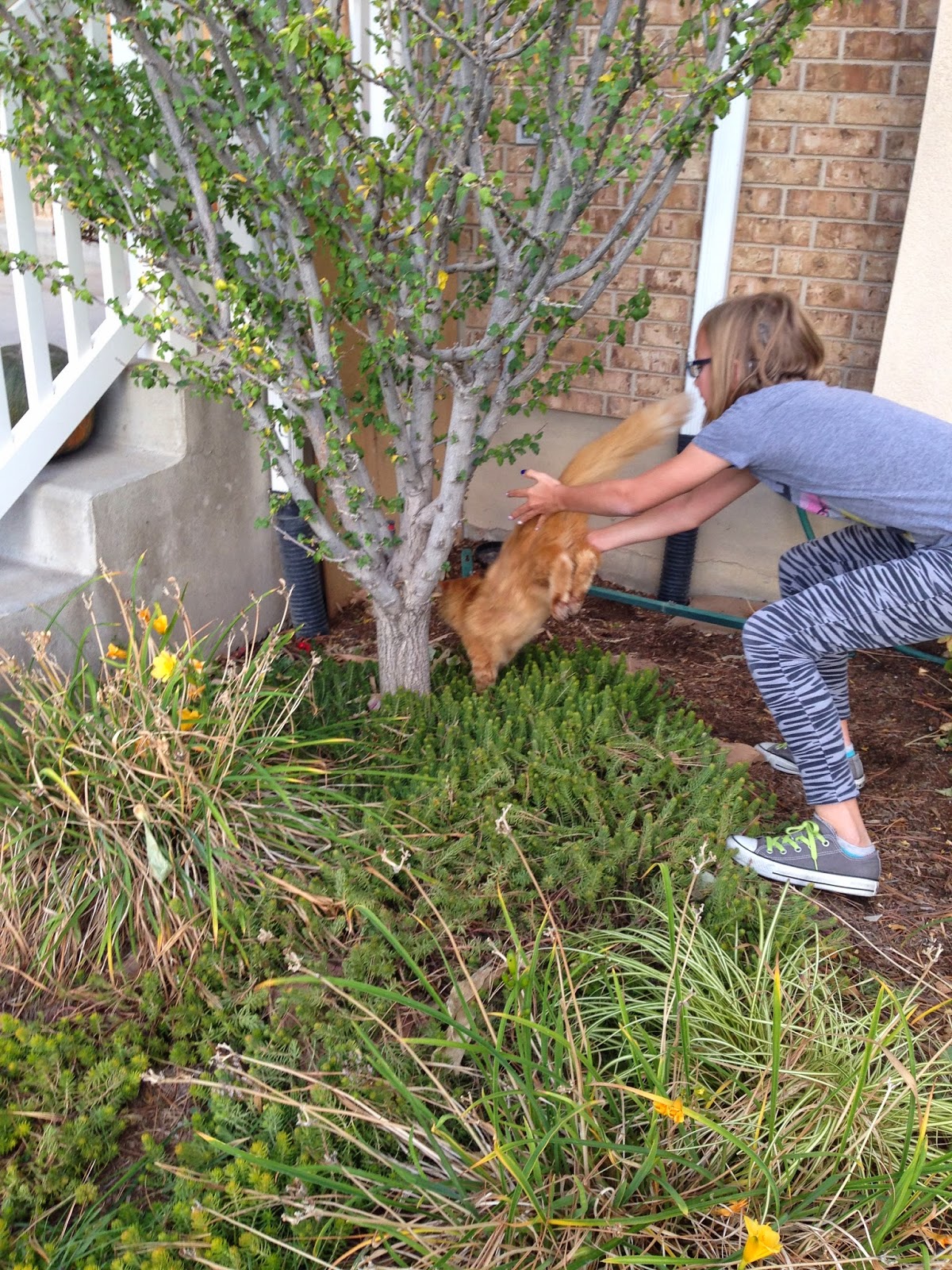 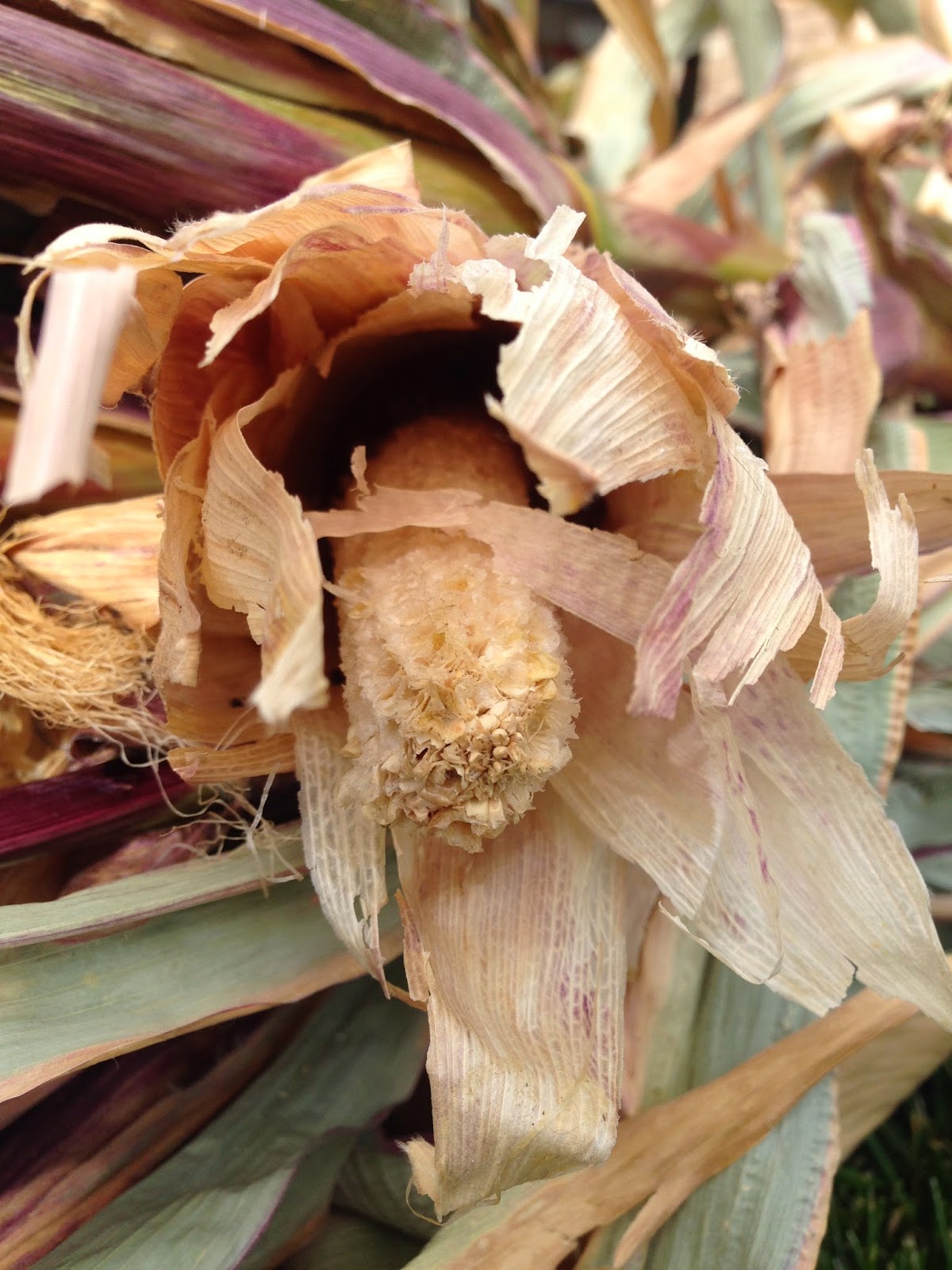 so that is the story of how i found out we had mice and painted my front door blue.

love,
emiline
Posted by Em at 4:21 PM 2 comments: Links to this post