the same as a newborn elephant 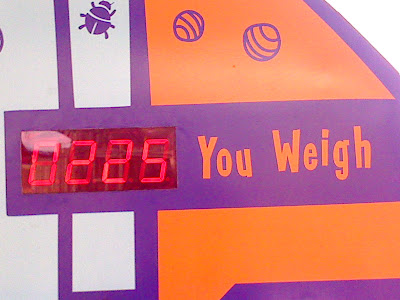 met my friends at the zoo today.
i pushed the stroller around while the pork loin ran amuck.
he only cries when we go by the massive metal fake elephant.
scares him to death.
LOVES elephants normally.
a near obsession.
just not this one.
can't get in or out of the zoo without passing it.
so the poor kid gets his terror at the beginning and end of our trip each time.
he used to crawl up the stroller and into my arms.
now he just cries and covers his eyes.
it's adorably sad.
so we walked around.
it was about 30 degrees.
nice for salt lake this time of year.
wish there would have been more sun.
that's what i really went for.
and the chatting.
i love the chatting.
big scandal at the zoo this week is that the zebra's mysteriously died.
2 of them.
they are reporting no foul play as of yet.
i missed seeing them.
so i got on the massive scale after we passed the "spike-y pigs."
brennan got on first.
it said he weighed 75 lbs.
he weighs 32.
it said i weighed 225 lbs.
dr. N's scale and mine have not been telling the truth if this scale is correct.
or this scale is lying.
no matter.
it would have been more fun to have it tell you the truth though.
if i scrapbooked, it would have definitely made the book.
but i don't.
or does this count?
then i looked down to the comparison chart and saw this: 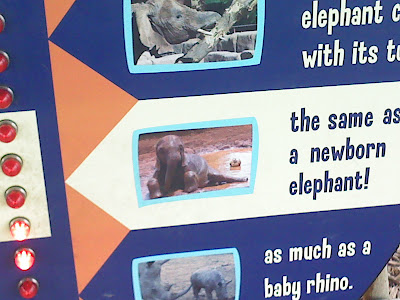 apparently by this scale i weigh the same as a newborn elephant.
for some reason, being compared to any type of a newborn in weight makes me feel young and thin.
who cares if the word "elephant" is used in the same sentence;-)
BAAAAAA HAAAAAAAA HAAAAAAAAAAAA!!!!!!
...
in other news...
i've found that it is not possible to make a phone call to anyone at this point without them answering with one of the following phrases:
1. are you at the hospital?
2. are you in labor?
3. is it time?
and i absolutely LOVE it.
all of it.
Posted by Em at 12:31 PM 9 comments: Links to this post 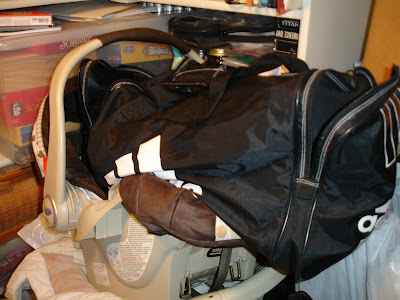 yesterday dr. N told me i'm 80% effaced and 3cm dilated.
last week i was 50% and 1 1/2 cm.
i was shocked at my progress, seeing as i never made any progress with brennan.
in fact, by now with brennan i already had my epidural.
as i drove home from the hospital i thought,
"i hope my water just breaks. timing contractions is too complicated for me."
i never packed a bag ahead of time with brennan.
i was convinced he was never going to come out.
i still think he'd be in there if dr. N hadn't induced me.
imagine what THAT would look like!
so i'm feeling anxious now.
i ran around my house making lists last night.
i packed a bag.
not really with anything for me.
just with binkies, boppy, booties, hooter hider.
stuff like that.
had sean get the car seat put together.
we're missing the infant head thing...
i think it's in the stroller at bree's...
thinking all of these things would make me less anxious.
no. they just riled me up even more.
i realized my little plan for induction may not work out.
although i think it would be good for me.
to not have my plan work out.
i keep thinking that it would be a funny joke to wake sean up in the middle of the night and tell him my water broke.
but i don't, b/c i think it would be more mean than funny.
at least to him.
and then if it really did happen he might not believe me, and it wouldn't be as fun.
so now it's back to waiting.
and feeling proud of my little body.
it's actually going to do this!
amazing. 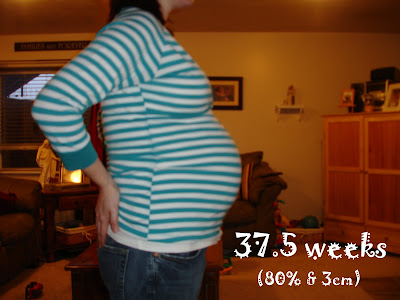 and i took a new picture.
just in case i don't make it to next monday's shot.
Posted by Em at 7:18 AM 16 comments: Links to this post

Email ThisBlogThis!Share to TwitterShare to FacebookShare to Pinterest
Labels: in my head, motherhood, pregnancy 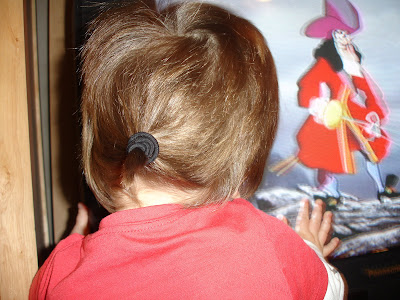 either the pork loin needs a haircut or i need max to come out with lots of long hair.
as soon as possible.
both.
yes, to all three.
please.
Posted by Em at 8:07 AM 6 comments: Links to this post

Email ThisBlogThis!Share to TwitterShare to FacebookShare to Pinterest
Labels: brennan, in my head, motherhood, pregnancy 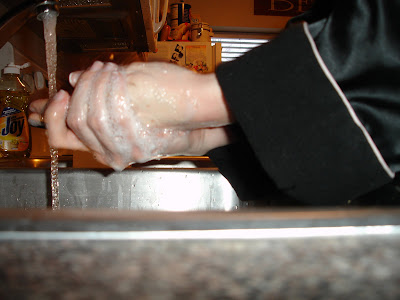 seriously, do you?
...
in college i took a debate class
where we had to write a persuasive speech and give it in front of several large groups of people.
i chose the topic of hand washing.
something i was not previously been very avid about doing.
i was 19.
so i found a ton of research.
made some posters and overhead transparencies.
do you know that the CDC reports that if you ask a room full of people if they wash their hands after using the bathroom 80% will say "yes" they do, but only 20% will actually be telling the truth?!
gross.
i was so one of those "yes" people that was lying.
double gross.
not always, but sometimes.
see, i was one of the many that thought there were "certain" bathroom trips that didn't spread the bad germs, and thus did not always require a thorough washing.
yuck, yuck, yuck.
so embarrassing.
i rarely washed my hands before eating.
i just didn't think about it.
our rule now?
you walk in the house, you wash your hands.
you touch the potty, you wash your hands.
you prepare a meal or plan to touch food of any sort, you wash your hands.
you absolutely don't touch your eyes, mouth, or nose without washing your hands.
we are talking soap and warm water for at least 20 seconds, or the abc song.
whichever counting game you prefer.
so if you don't have a new year's resolution yet, make it hand washing.
it's always something that can use a little improvement!
and by the way, i won the entire debate contest in the persuasive speaking category.
trophy and all.
so proud:-)
Posted by Em at 7:20 AM 8 comments: Links to this post 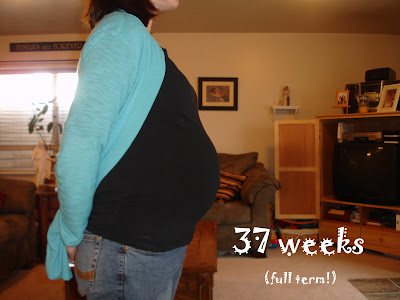 i don't like the way my voice sounds recorded.
voicemail, video camera, whichever.
call me picky.
call me critical.
it just doesn't ever sound like it does in my head.
i think my voice is nice in my head.
just not recorded.
i either end up sounding sassy, mean, ditsy, or one octave higher.
when i worked for melaleuca in college we would have to listen to previously recorded calls of our voice.
one time i ran the DJ line that customers listened to while they were on hold, telling them about specials, how long the expected wait time was, blah, blah, blah.
my manager was listening on the line and said my voice had a higher inflection at the end of every sentence.
i didn't get to do the DJ line again after that.
oh shucks.
i guess i'm not the only one that doesn't like my voice on the phone.
i'm still convinced it sounds much nicer in real life.
or at least in my head.
...
in nesting news...
the car seat and swing are the only items left to be washed and readied.
which means there is no chance of her coming any earlier than my induction, set for the 7th.
had we waited and done nothing to prepare i'm sure she would have come today.
my popping back would have appreciated the early arrival.
brennan is curious about the other crib in his room.
this should be interesting...
diaper bags that double as a backpack are one of life's greatest joys.
i highly recommend them.
company's that tell you your crib bedding will arrive in one week and then 2 weeks later have still not called for pick up are NOT one of life's great joys.
although, i still do recommend them.
they price match, even on the internet.
i like that.
although i still can't figure out why i didn't just have it shipped from the internet.
free shipping, duh.
i woke up today ready to have a baby.
this after getting a few stretches of 3 hour sleep cycles.
i can't say this will be the tune i will be singing after the baby is had, i'm just saying that is the tune i'm singing today.
it's not that i believe i'll be getting more or better sleep after she arrives.
i know i won't.
i remember.
i think sean has forgotten, but i remember.
the kind of tired that you feel in your bones.
the kind that when someone tells you they are SO tired after sleeping 10 hours that makes you want grab their head and shake it.
and then makes you want to say, "you don't know what tired is!!!!"
and then makes you feel old.
it's just that i'm bored with the current reasons waking me up during the night.
i'm bored with the current reasons i'm too tired to walk at a fast pace.
let's get the show on the road.
enough thinking and planning.
i'm ready.
it's GO time!
i'm just wondering if having baby #2 will be a lot like sophomore year.
when you think you know it all and have everything under control b/c you've SO done this before.
Posted by Em at 12:40 PM 10 comments: Links to this post