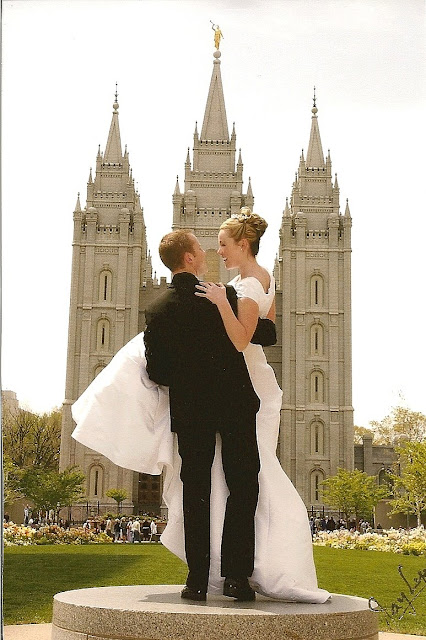 we are one in a million.
i love you. 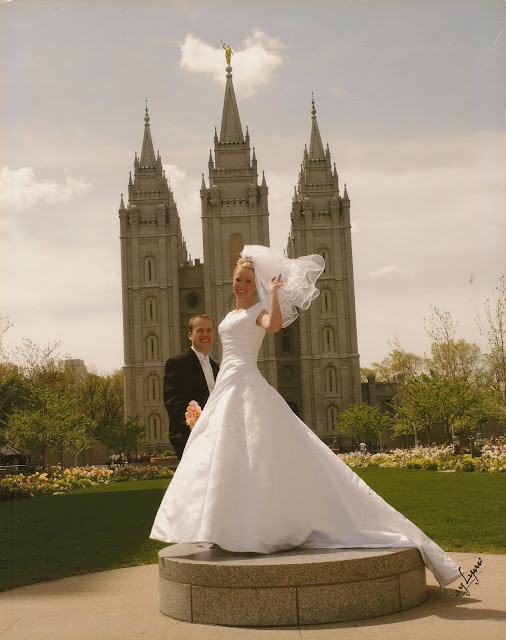 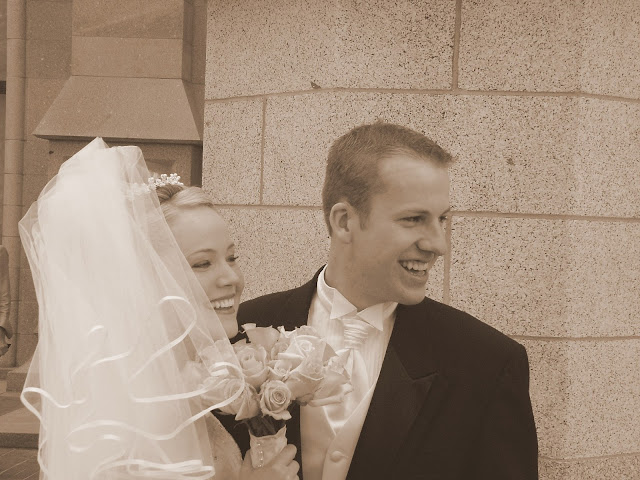 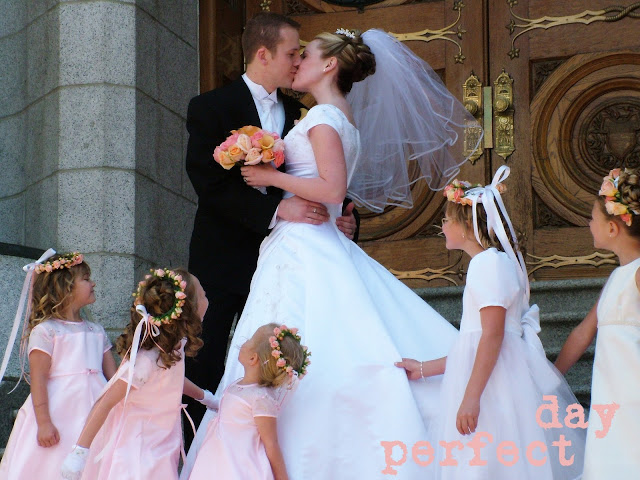 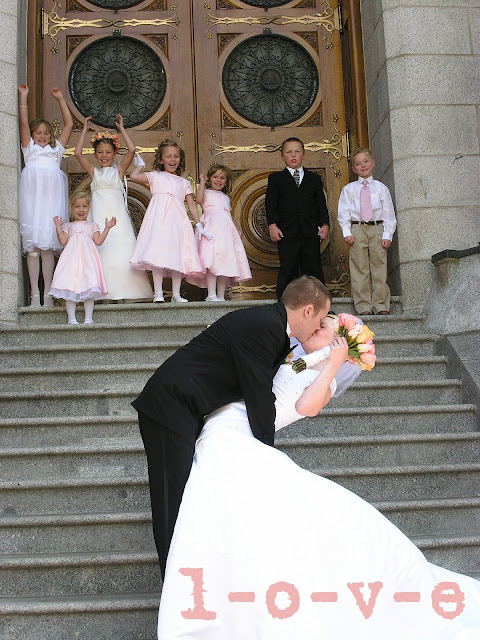 it was a sunny day.
stacie had to put sunscreen on me when we were taking pictures.
you know how i sunburn so easily.
there were only a few clouds in the sky.
the tulips were everywhere on temple square.
the japanese tour bus stopped and took pictures of us.
it was pretty awkward.
i waved at them.
you threw me up on your shoulder.
they took more pictures.
i was so embarrassed.
but i also felt like a movie star too.
i stopped putting on lipstick because we kept kissing it off.
so in most of our pictures i don't have any on.
i love knowing why.
there was a little breeze.
it kept blowing my veil.
after three hours of taking pictures in the beautiful perfect spring utah sun we walked to carl's junior in our wedding attire down state street.
you bought me an icy cold diet coke.
our friends were driving in their car and hung out the window
waving and yelling and smiling at us.
i was bursting i was so happy.
we had just finished finals at byu-idaho.
i had taken 21 credits that semester, worked 17 hours a week, and still got straight A's.
you worked full time because it was your off track.
it felt so amazing to just be there together with no responsibilities but each other.
i don't remember a single thing going wrong the entire day.
i'm sure things did, but i was oblivious.
just being with you, taking in the entire day, celebrating us.
i couldn't have asked for anything more.
when the kids all wake up all night long,
and we're BONE tired at the end of the day,
and there's poop everywhere,
laundry that's not done,
and it seems like the toys have taken over,
sometimes i'll think back to that day and the week of our honeymoon right after,
and i'll just go to that place,
and it makes me so happy to just be married to you,
being with you through all of it.
and remembering every detail of that day when it all started eleven years ago today.
Posted by Em at 6:00 AM 2 comments: Links to this post

Email ThisBlogThis!Share to TwitterShare to FacebookShare to Pinterest
Labels: anniversary 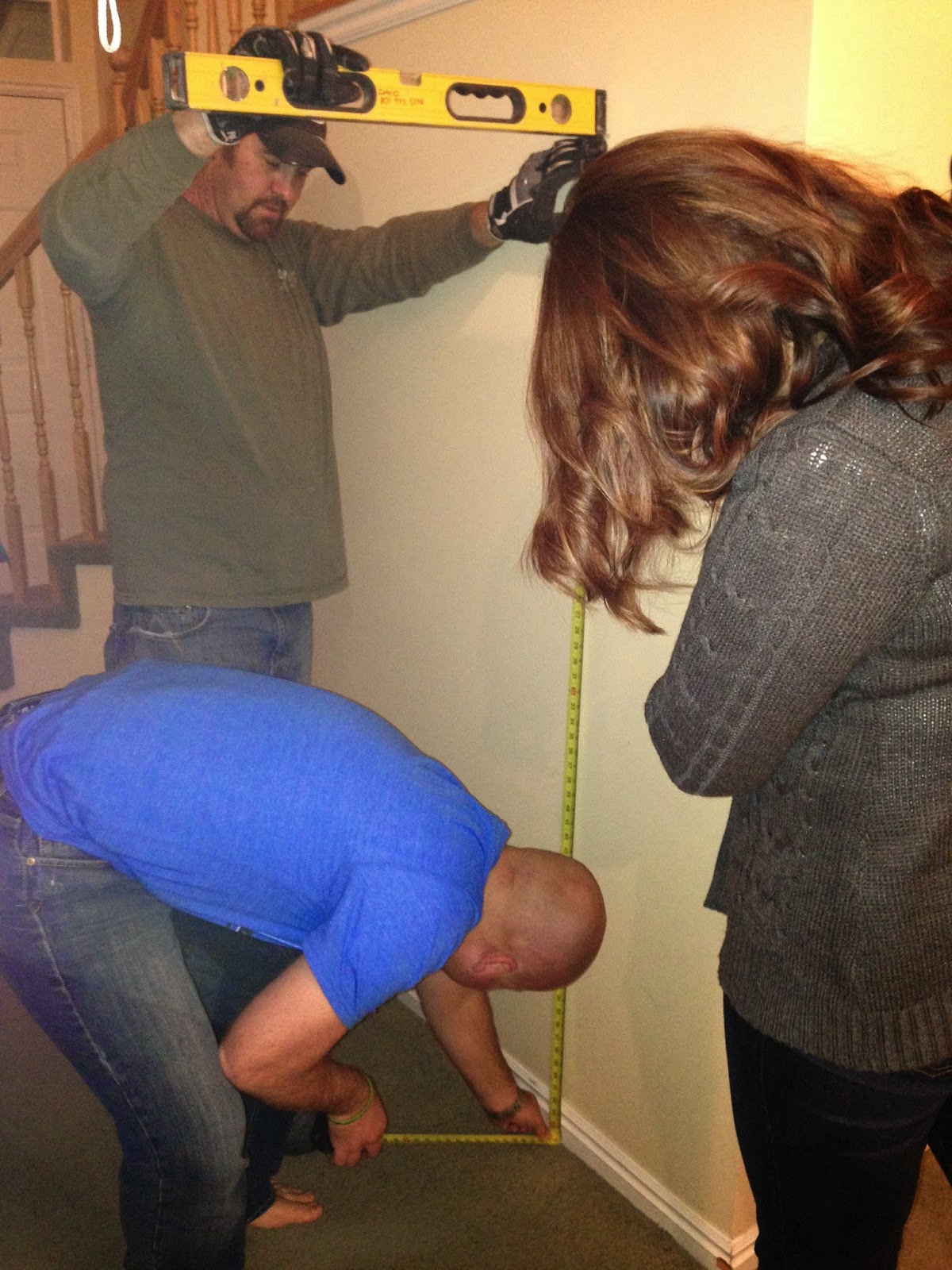 dave didn't believe i was 5'5".
so i stood up against the wall and properly proved him wrong.
actually i thought i was 5'5" and a HALF.
he said i  was 5'4".
of course he has things like measuring tapes and levels on his personsables at all hours of the day for emergencies such as these.
sean and andrea were the moderators.
i will miss these late construction nights where we are all up so late together we laugh until we cry over stupid things like whether or not i'm 5 foot 5
and a half.
Posted by Em at 8:13 AM 1 comment: Links to this post

Email ThisBlogThis!Share to TwitterShare to FacebookShare to Pinterest
Labels: humor, the basement

the "surprise" in the car magazine {awesome mom} 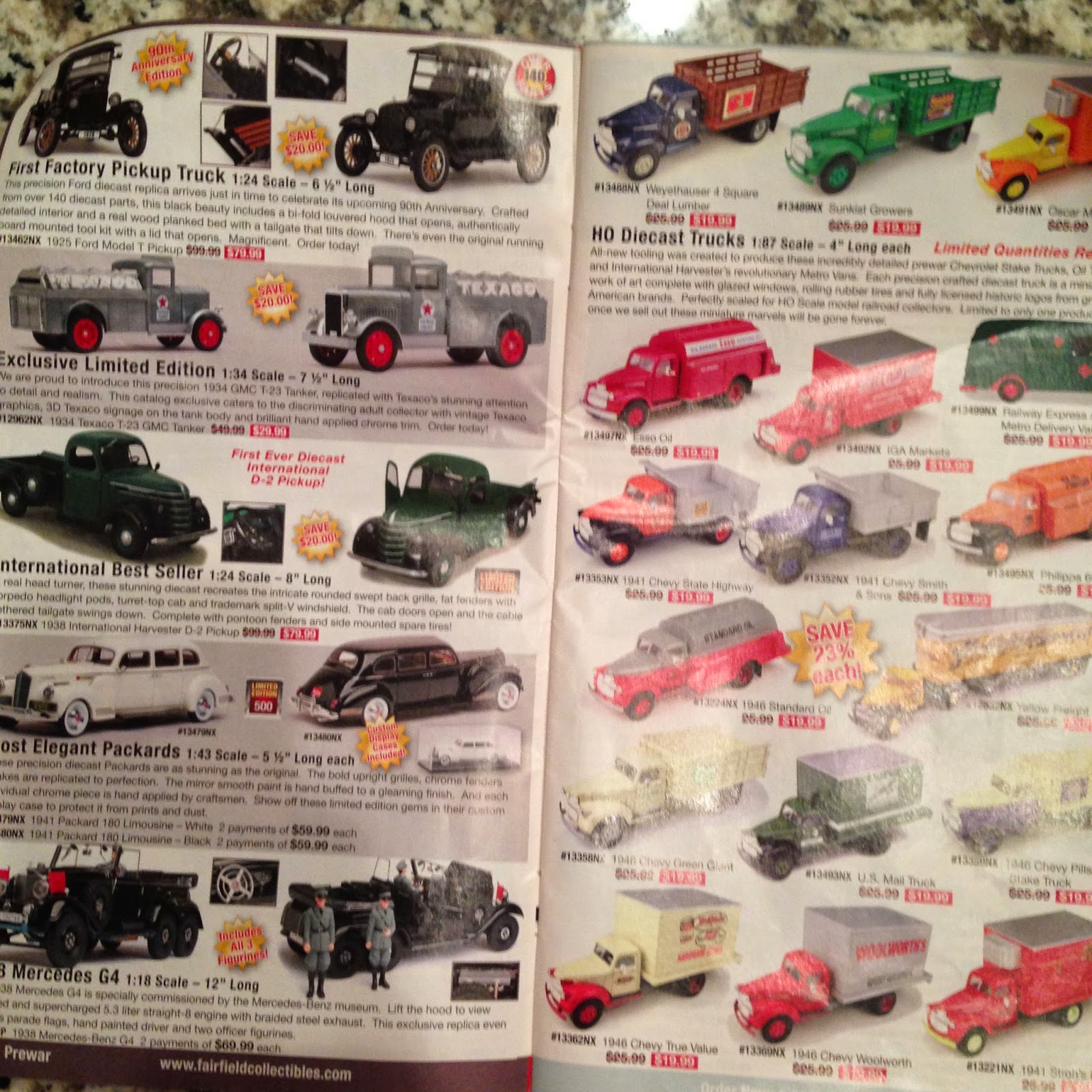 this is the story of the "surprise" in the car and truck magazine.
one day about a year ago.
or six months.
or some time a long while ago, that's all i know.
long enough that it was basically a staple around our home.
a car and truck magazine that came in the mail.
that's what i'm talking about.
this is basically chase's favorite thing to come in the mail EVER since he doesn't know about money and grandparent checks and boxes that say amazon on the sides yet.
so this car magazine came,
and he would sit in different places all over the house looking at it.
awe-ing at the different cars and trucks and tanks and boats.
it was such an entertainer that i KNEW it needed to be in the church bag.
and believe me,
it held his attention there too.
it was the magic car and truck magazine.
that's what i thought of it.
so when we went to our nephew's baptism in arizona last month,
knowing how LONG baptisms are in arizona i packed church bags with the regular garb for all three kids to have.
have you ever been to one? an lds baptism in arizona?
it's like 20 kids all on the same day. sometimes more.
it's organized.
SUPER organized.
like i sit there and think about how these people are pro's
at massive primarys with millions of 8 year olds.
they have it down to a SCIENCE i tell ya,
a well oiled machine,
but depending on where you fall in the line up, there's usually a video involved, some talks, a musical number, and sometimes a congregational hymn.
you know, not quite as long as a sacrament meeting that goes over, but about as long as catholic mass on christmas and easter,
which means it's just a little bit longer than the norm b/c well, it's a special occasion.
so i made sure to slip chase's special awesome car and truck and boat and tanker magazine into his monkey backpack for the pre-baptism stuff in the chapel on baptism day,
and let me tell you, we were prepared.
fruit snacks,
granola bars,
and car magazine.
we were one happy of row of out of town gibson's.
and i was feeling pretty awesome.
prepared and awesome:)
oh yeah.
and then chase took his awesome car magazine over to sean and they went through it page by page together with a super spiritual movie about jesus playing on the projector at the front of the chapel,
and i was sitting there looking at my reverent family just feeling, like i said before, awesome:)
and that's when sean looked over at me and was all,
"honey!!! WHERE did you get THIS magazine???"
and i was all, "it came in the mail. isn't it awesome:)"
and i had a huge smile on my face because i just KNEW my husband was thinking how awesome of a mom i was because my kids were being so reverent and out of town church going awesome.
and then he was like,
"um honey, come here..."
and so i scooted over for him to whisper sweet praises into my awesome mom ears and that's when i heard it.
"there's PORN in here!"
and i was like
"excuse me?"
and he was all,
"on page 41 and 42, between the tractor page and tank page!"
"whaaaaat??? what do you mean??"
that's what i said.
and he was like, "naked girls and girls wearing skanky stuff!"
and that's when my eyes got all big,
and i covered my mouth,
mostly because i was laughing and feeling all IRREVERENT because who laughs about porn in your kid's magazine IN A CHAPEL at a BAPTISM anyway???
well, we did.
mostly because it was just so ironic that such a discovery would be made in such a holy place.
and also there's the question we were wondering which was how many times has chase looked at those pictures, and how crazy it is that you can just miss something
like this IN your home for so long.
so we swiftly closed up that car and truck and tank and boat magazine,
irreverently laughed over the matter for about 5 minutes more because there just couldn't have been a worse place to find such a thing.
and also a funnier place to find such a thing.
and REALIZE such a thing.
and then we walked into parker's baptism with our
by that point, 3 irreverent kids,
'cause ya know we are SO awesome and prepared and stuff:) 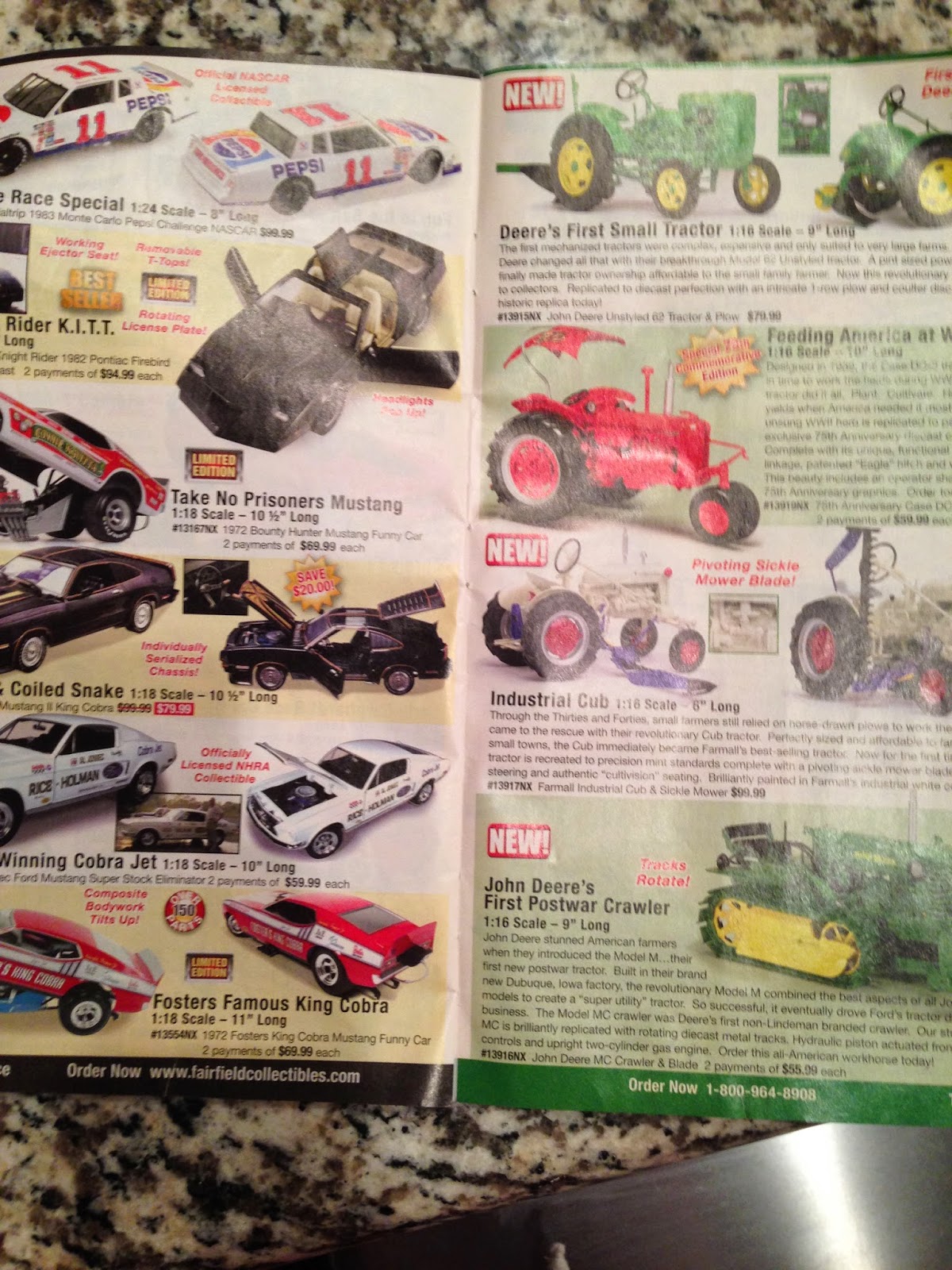 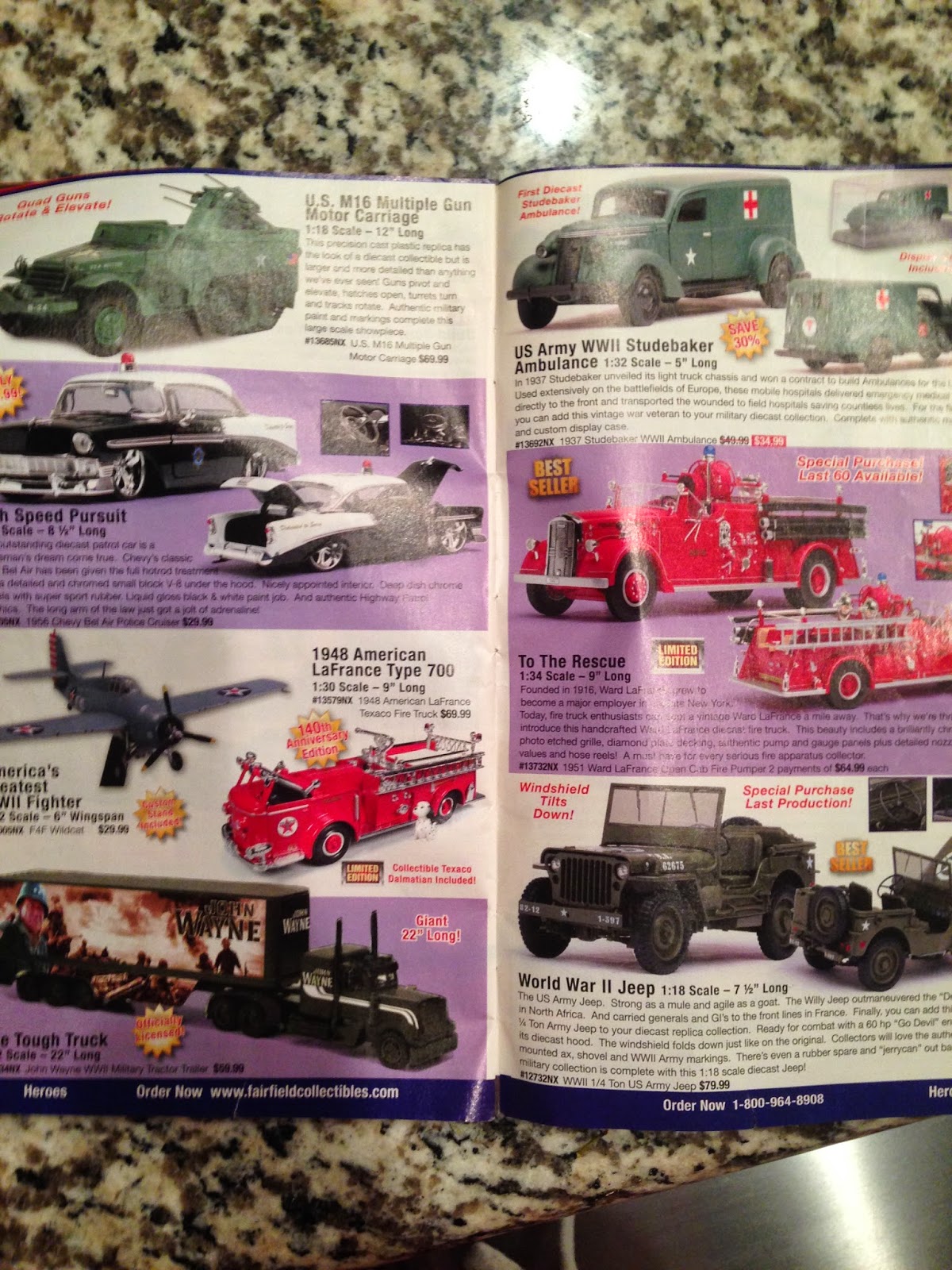 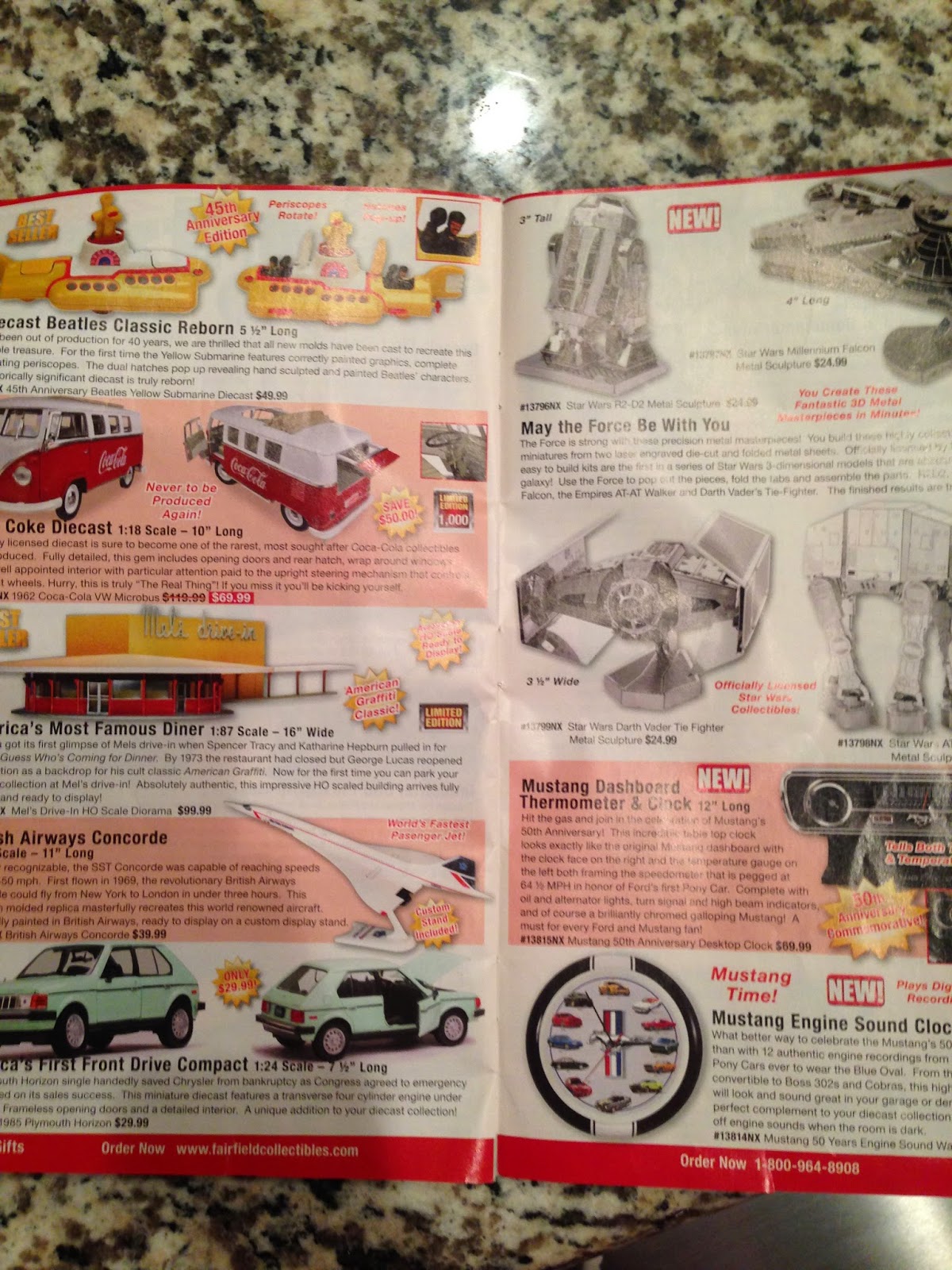 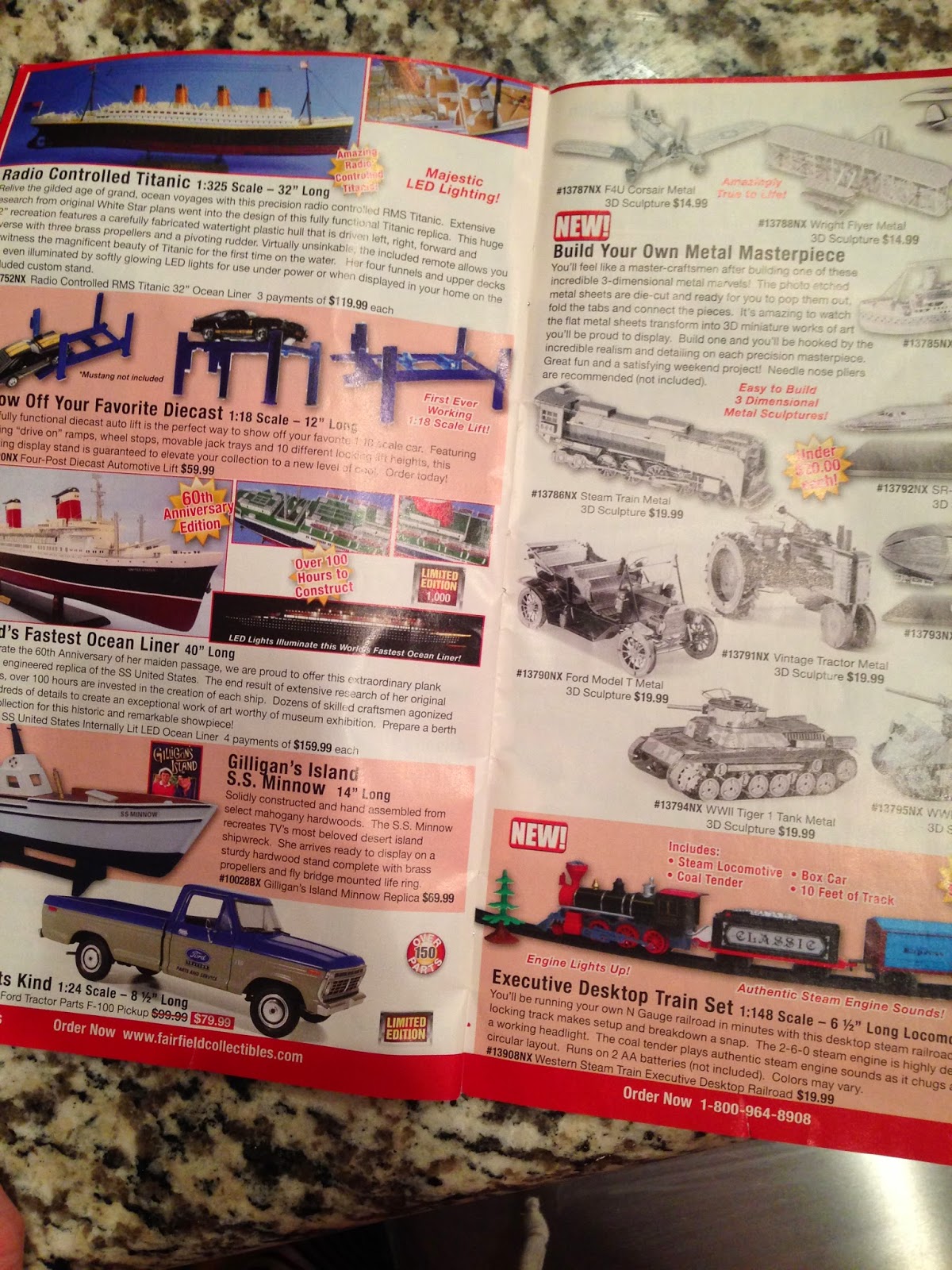 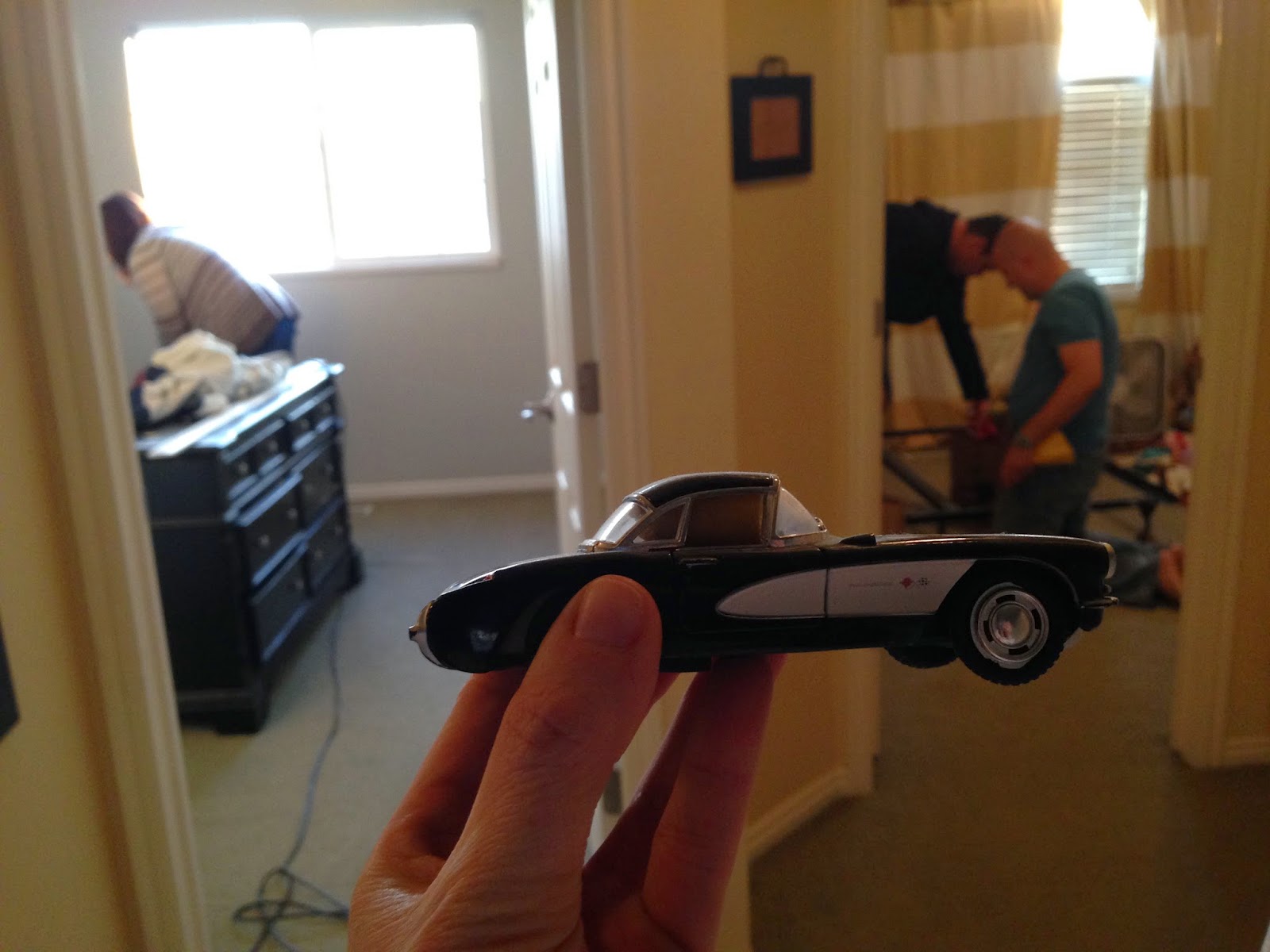 i wear earplugs every night.
ever since the dorms at chico state. i'm hooked for life. it's fantastic.
it's the only way i can tune out all the noises and stay asleep,
not worrying about all of the little sounds that go creak.
and the other night i was telling sean that my earplugs have literally vanished.
and now i'm down to one single pair.
and when one falls out and gets lost in the sheets at night i panic.
because then i know i'm down to one single plug,
which is still manageable because i just use it on the side that's not laying on the pillow:)
i'm such a genius i know.
so anyway, i was telling him about this on friday night.
how i can't figure out where they've all gone.
he told me how cute i was, and then we went to bed.
then next day we started moving beds down to the basement, vacuming rooms, and pulling toys out from underneath all of the spaces that have been hidden under the guest bed and brennan and max's beds for 4 and 1/2 years, and all of a sudden sean comes RUNNING out into the hall laughing so hard he can barely contain himself.
why you ask?
because it appeared the mystery of the missing earplugs had been solved.
sean had found all of my earplugs neatly shoved into a little toy car under the guest bed in chase's room.
we just KNEW it was chase right away because it had his name written all over it, but just to make sure i quizzed the other kids.
sure enough, chase was found guilty as charged.
he even fessed up about it when we asked him.
and it just made me SO happy inside.
because i love seeing little glimpses into the world of my kids.
the one that they have in their own little quiet spaces,
where they put their most prized possessions,
and they operate in their land of play without me,
even though i'm there and they're there.
where they're figuring out life for themselves,
all while i'm doing laundry,
making meals,
brushing teeth,
wiping faces,
driving carpool,
reading stories,
giving baths,
etc.
being completely oblivious to the private parts of their lives that are just rightfully their very own.
and i just love when i get to see a little part of that.
also, i REALLY loved that i found ALL of my missing earplugs.
shoved inside chase's toy car,
so that i don't have to be down to one plug anymore.
all safe and sound like little sardines:) 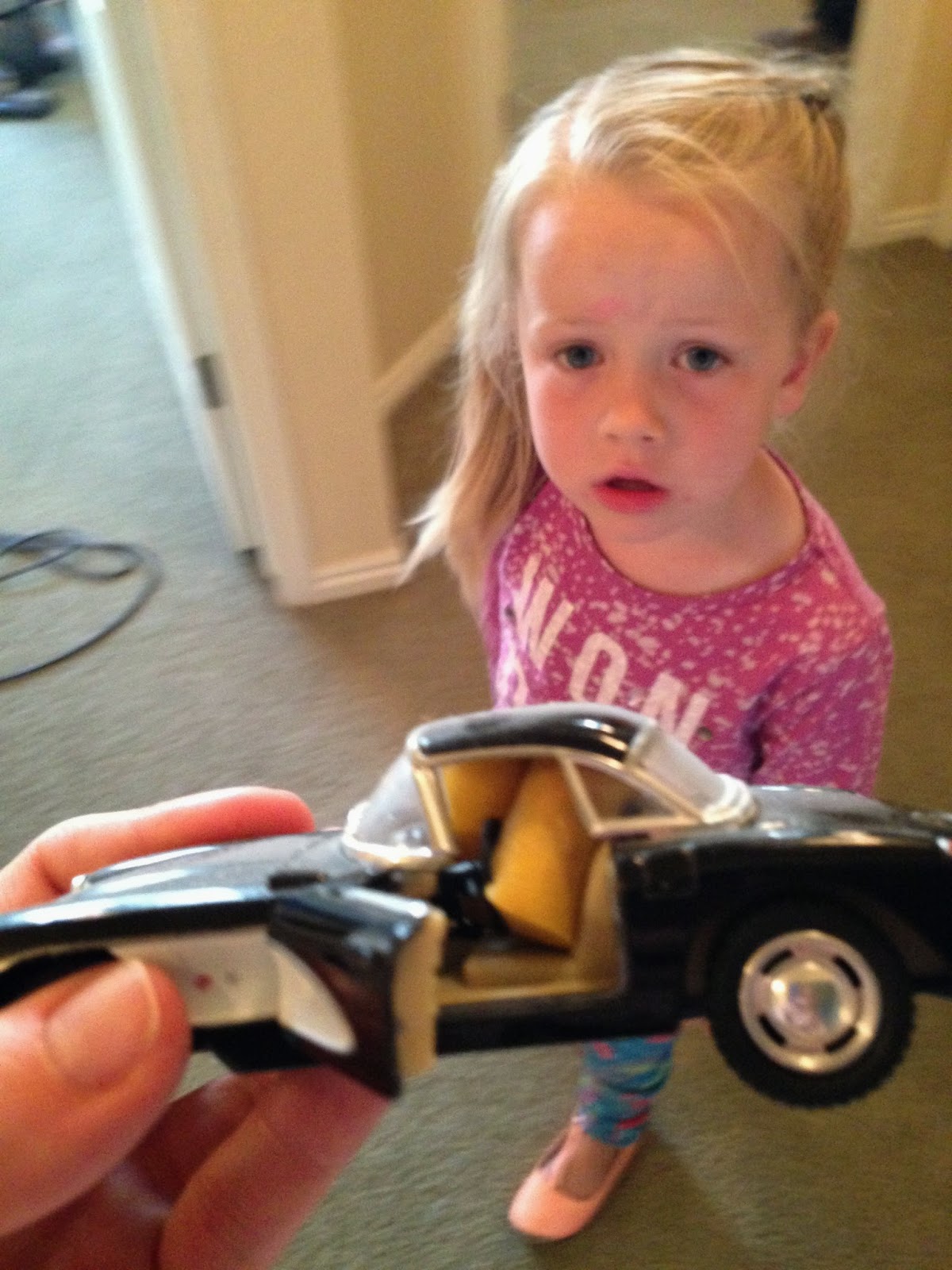 so handy they were all in the same place.
Posted by Em at 8:53 AM No comments: Links to this post