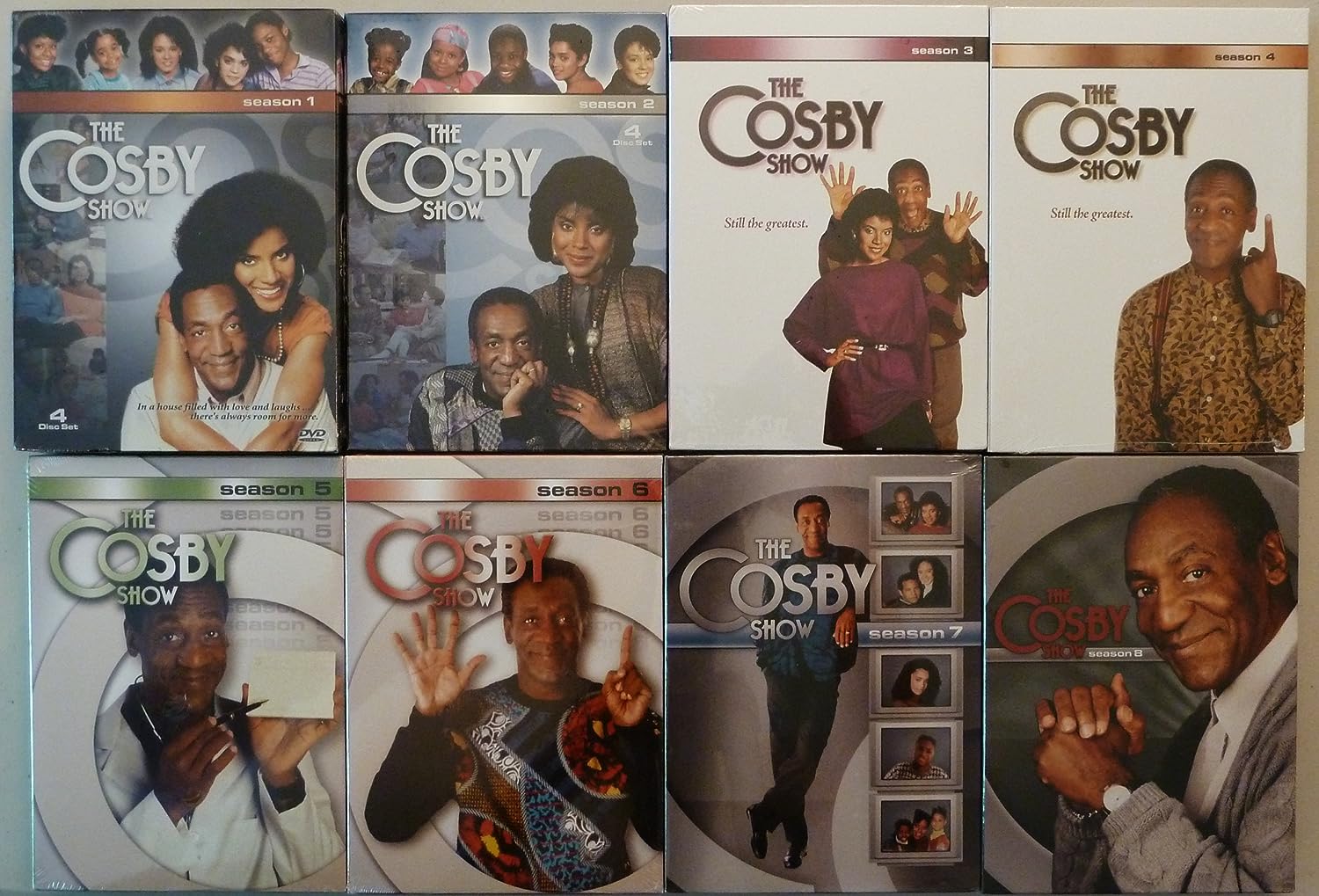 dear santa,
how are you?
how are your christmas preparations going this year?
i promised max and brennan that i would let you know that they slept the best they've ever slept last saturday night.
and also, i promised you would make them an extra present for doing so.
i believe in the magic!
so please, no underwear for them this year.
for me, i would also like to forgo underwear.
i'm all stocked up:)
i have something special in mind.
it's not a million dollars,
and it's not a sports car.
i would like the complete cosby collection.
i have never laughed so hard than i did last tuesday night watching the cosby show on demand.
see, i tried to watch pbs, but then the vultures started eating the baby seals that were crushed under the males that were fighting for the women.
then i tried to watch secrets of the dead bones of budha,
but the man didn't have a british accent and it also wasn't very exciting because they didn't really know real facts.
the week before that i tried to watch sister wives, just to see what all of the fuss was about,
but i ended up vomiting in my mouth, so then i tested out toddlers and tiaras, but i only made it 5 minutes with one and that was about 5 minutes too long.
so while sean was off at church meetings, and a long line of bad experiences on netflix and live telvision, if you can even call it that, i decided to give my hand a try at on demand.
i needed to be inspired!
in a way that can only happen from the comfort of your couch with a remote control in hand.
i started with the A's,
as they are always the best place to start.
downton abbey seasons 1 and 2!
i could watch them again!
this would be great!!!
except for the part where they reel you in like that,
and then tell you you're not a subscriber for this option,
but you can pay more to have it in three easy steps.
negative.
then the B's.
nothing.
then, low and behold they appeared!
under the C's.
THE COSBY SHOW.
three 22 minute episodes.
i sat there on my couch laughing so hard i was crying.
and when sean walked in from the store with my chocolate satin pie i made him sit down and listen to the story line of why i was laughing, and then we watched two more episodes laughing.
but the funniest one was thanksgiving was when mr huxtable {is that how you spell that?} got sent to the store four times on thanksgiving for things he kept forgetting,
and the third time he finally remembered the eggs, but it was raining and the bag was wet, and the eggs fell out of the wet soggy bag and broke all over the floor, so he went out and again, and then the funniest part happened, but i won't spoil it for you.
anyway, we were both laughing so hard and talking about how this was great television,
and why do i ever waste my life watching teen mom and other shows like that anyway???
so santa,
i'd please like THE COSBY SHOW on dvd for christmas.
i've worked really hard all year,
and i promise i'll try to swear less,
and shower more.
also, i eat my fruits and vegetables every day,
and i really try hard to not cut people off on the freeway.
i hope you've been watching all of my best behavior,
and forget my worst.
because everyone knows that focusing on the positives is really what counts;)
and i KNOW how great you are.
especially in your red suit.
it really is your color.
and i promise to not let max lick all of the cookies this year before we put them out.
{sorry about that last year--she just got away from us for a minute}.
anyway, carrots for the reindeer and winder milk will be with the unlicked cookies especially for you!

all my love,
emily

coming out of the pumpkin pie closet. 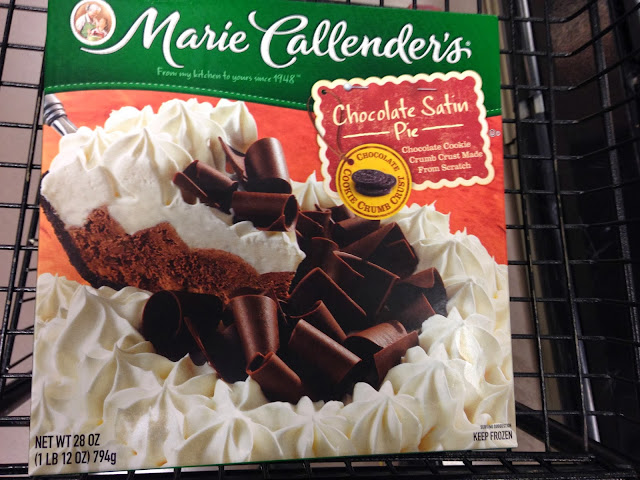 {i sent sean to store last night at 8:53pm to buy this.}
...
let it be known
that i don't like
pumpkin pie.
there.
i've said it.
i've always eaten it.
because i'll eat anything smothered in whipped cream.
except for oysters.
i won't eat oysters.
especially not smothered in whipped cream.
shudder.
so when my mother in law asked me if i would like to bring a pie
for thanksgiving dinner,
i said yes!
i'd love to bring a pie!
how about
a frozen marie callender's chocolate satin pie!?
with chocolate cookie crumb crust!
from scratch.
it says so on the box.
and then to my surprise,
she consented!
bless her:)
i mean really,
who brings chocolate pie to thanksgiving dinner anyway???
ME:)
i do i do i do.
and who let's you ruin their thanksgiving dessert like that?
my wonderful mother in law,
that's who!
and guys,
i just want you to know
that i am finally excited for thanksgiving dessert.
for the first time since i was 12.
GLORY BE!
because after a day of eating turkey,
stuffing,
chocolate see's turkey's,
green beans,
mashed potatoes and gravy,
and marshmallow topped sweet potatoes,
i just can't motivate myself to open my mouth for a pumpkin pie.
unless,
do they make chocolate pumpkin pie???
i think i'll have one bite of sean's pumpkin pie,
just to make sure i really don't like it.
or maybe i'll be so daring to mix a bite of the chocolate pie with the pumpkin pie.
oh the agony of being an indecisive person!
better safe than sorry.
that's all i'm sayin'.
in other news...
brennan's so excited to have 5 lazy days in a row.
me too pal!
ME too:)
Posted by Em at 6:00 AM 1 comment: 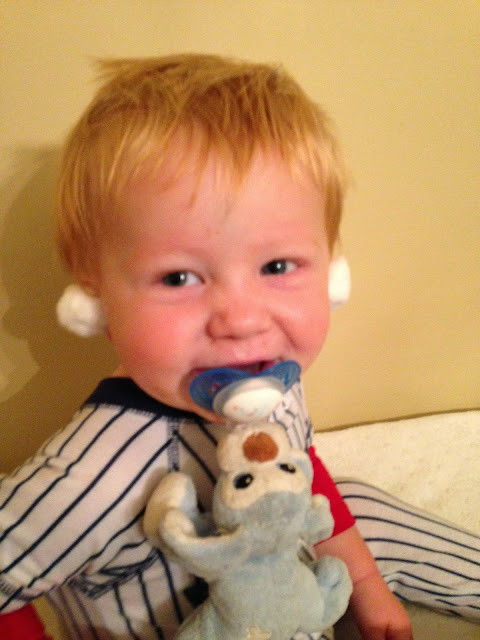 cotton headed ninny muggins.
i just couldn't help but call him that tonight.
you know, with cotton balls coming out of his ears.
but not in a mean way,
in a nice way.
like a fond endearing term kind of way.
plus, it really made me excited to watch elf,
and also he's a baby,
so they don't know that you're calling them something mean,
as long as you say it with a smile and tickle them,
it comes off as nice.
scout's honor.
poor chap had blood coming out of both of his ears this morning.
last night it was clear and i was all,
"it's fiiiiiiine, clear is good, i'm sure he just licked his fingers and shoved them in his ears."
but then this morning i was like,
"WOOOOOAAAHHHH!!! there's blood coming out of his ears! not good!!!"
thank you tubes.
thank you antibiotic/steroid drops.
4 times in each ear, 2 times a day, for 10 days.
just like the good ol' days,
except with sleep.
it's like coming home for the holidays.
sort of.
why oh why do i pack my christmas dvds in the christmas decorations boxes
that are barricaded off by the halloween, and easter decorations,
which also are surrounded by all baby toys
that have been dispersed in every area of the basement by elf 1 and elf 2??
how am i supposed to watch elf before thanksgiving when it's packed away.
this is how i force myself into waiting to do such things until after thanksgiving.
because i know i have absolutely ZERO self control in matters such as these.
and i cannot be trusted.
barricades.
it takes barricades.
so until then i'll entertain myself with cotton stuffed ears on chase.
no babies were harmed in the making of this blog post.
FYI blood coming out of tubes with ears {or is it ears with tubes?}=ear infection draining.
no need to panic.
get drops. give drops.
cuddle baby. watch barney with baby. refill milk for baby.
thank your lucky stars baby's tubes haven't fallen out yet.
kiss baby. brush baby's hair to one side with your fingers.
and so on and so forth.
he is such a champ.
but last night was rough rough rough.
it's the molars really.
that are causing the ears to bleed.
and other things EHEM to take their course.
also he was getting over a cold.
perfect storm for an ear infection.
he was so very sad.
my heart was aching.
i love him.
and his perfect little chubby cuddly self.
he ate tonight for the first time in 3 days.
like a starving man in the dessert.
hilarious. 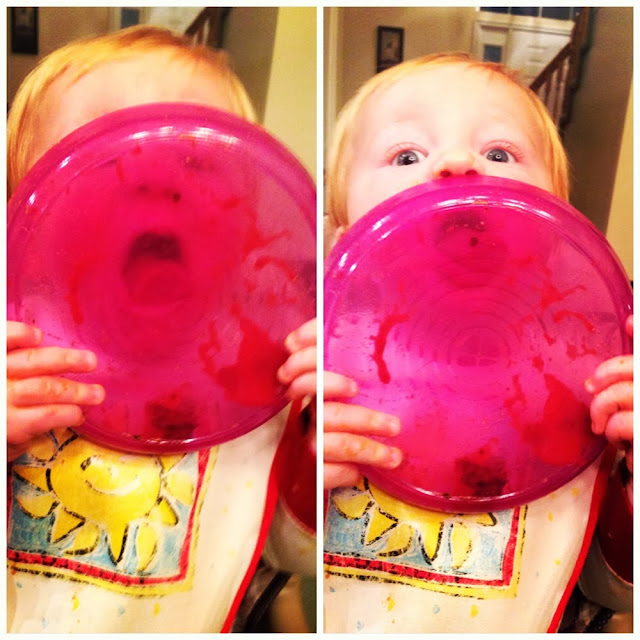 {tomato soup addict. hours of entertainment. or 20 minutes. whichever.}
P.S.
i feel zero desire to cook anything the week of thanksgiving.
this happens every year.
obviously psychological excitement.
you know, not wanting to spoil my supper.
thanksgiving supper.
by eating too early.
it's not that i don't want to eat.
i just have no motivation to cook.
we didn't eat dinner last night until 8:05pm.
on a school night.
b/c i just couldn't find it in me to get up and cook.
like i should hold off on all eating up until thursday,
b/c i just can't stop thinking about turkey!
turkey sandwiches.
turkey soup.
turkey drumstick with stuffing.
and leftover mashed potatoes.
but you can't eat turkey before thanksgiving.
you just can't.
so until then,
it's pancakes,
grilled cheese,
and baked potatoes with lots of stuff on top.
tomorrow night we might actually have to resort to cold cereal.
Posted by Em at 10:09 PM 1 comment: 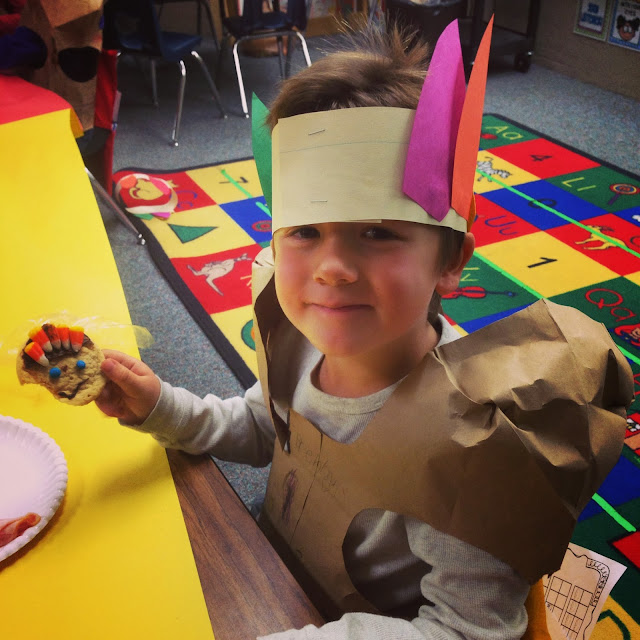 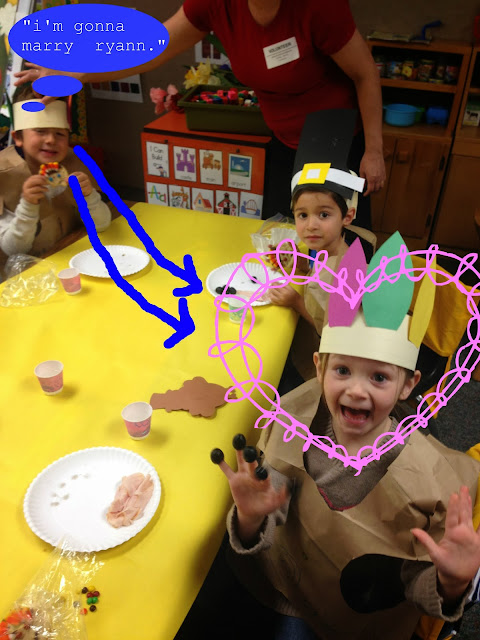 meet ryann.
brennan's first crush.
:):):)
he has a look when she's around.
this sweet 5 year old,
dreamy eye kind of look.
and he always makes sure she sees his work when it's done.
like when he bites his turkey cookie,
and he wants her to see it.
"ryyyyyyaaaannnnnn, look at my cooooookieeee ryyyyyaaaannnn"
{insert image of cheezy smile here}
in his sweet voice.
you know,
the kind of voice you'd use when you're talking to a baby,
but not the high pitched kind.
the "i'm going to marry ryann"
because i really like to be around her,
and her hair is pretty kind.
and really,
she is just the cutest little thing.
someday he's going to kill me for this.
but for now,
i'm just gonna document it all:)
Posted by Em at 1:43 PM 2 comments: