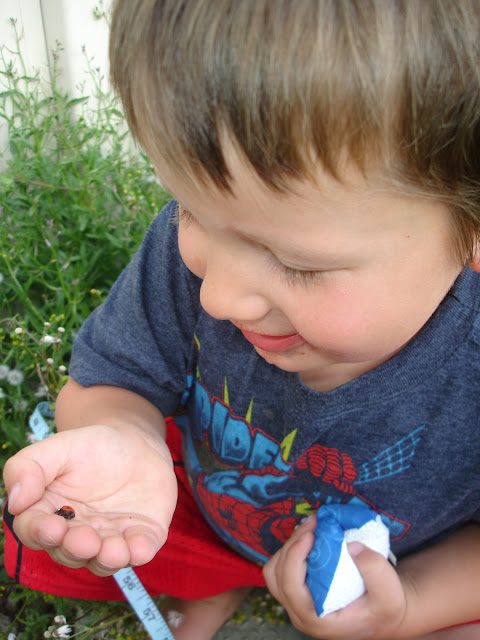 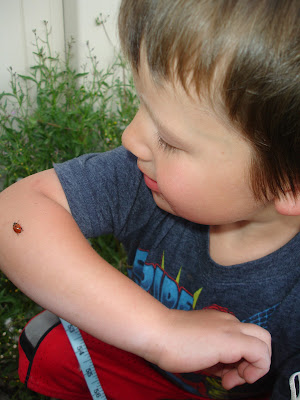 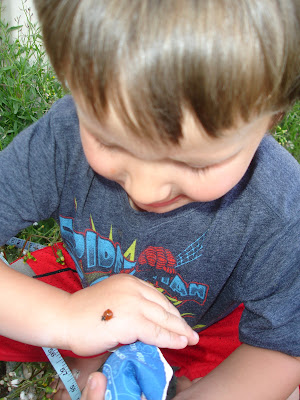 saturday night tonight:
secret mother's day preparations by my people
sean mows the lawn
the kids beg to be pushed on the swings for 4 hours straight
weeding
pizza
brennan tries to escape the fence
max runs away from brennan and his tape measure
brennan finds a lady friend
or bug
whichever.
either way,
he told us she loves him
rocket popsicles
green feet all around
baths
rocking baby chase on my chest 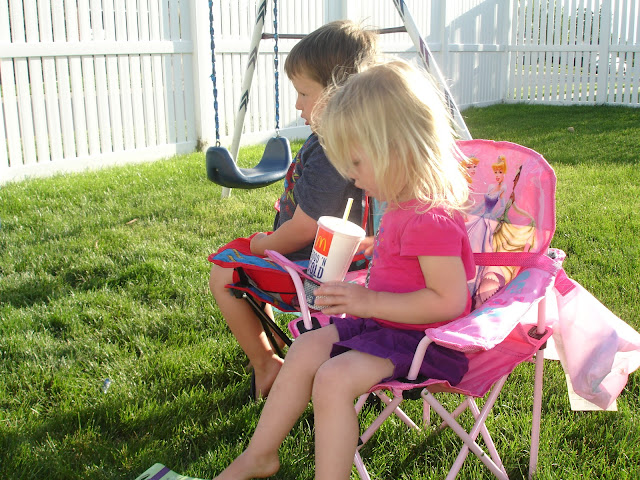 Email ThisBlogThis!Share to TwitterShare to FacebookShare to Pinterest
Labels: saturdays, the backyard 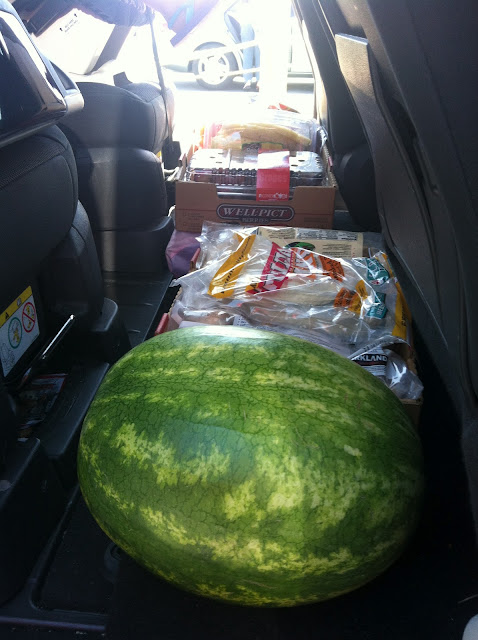 {i took this to send to sean announcing the first watermelon of the season}
.............
went to costco to pick up baby announcements.
max behaving.
chase sleeping.
brennan at preschool for another hour.
the lure of fresh fruit, greek yogurt, and uncooked tortillas calling.
carpe diem i said!
i made my usual loop through the fresh fruits and vegetables.
big smile.
b/c things are getting back into a routine around the gibson home.
and here we were shopping for our own selves with baby and toddler in tow.
and no one crying!
no one crying!
i laid eyes on the cardboard tubs of giant watermelons.
and could almost taste them from the sight of their beautiful green shells.
80 degrees this week was enough to set my summer habits of watermelon buying into full gear.
once a week,
every week,
until the trees turn orange, red, and yellow in the fall.
i explained to max how to pick out a watermelon.
"hollow like your chest, see?"
and i patted my chest.
so did she.
then i hoisted one into my cart.
we finished up, checked out, and loaded all of our loot.
still no kids crying!
with half an hour left before preshool was out we ran by the bank and home to unload.
just as i'm marveling at how well it all went i realize i must have left the watermelon in the car.
not there.
i climb in to see if it rolled back.
crazy driver in my mini van, you know.
didn't roll back.
checked the trunk.
front seat.
no watermelon.
checked my phone to see where i'd put it from the picture i sent to sean.
i must be more tired than i thought.
this is what i was thinking.
CRAP.
this is what i thought when i saw the picture.
b/c i realized that watermelon must have rolled out of my van,
like a meatball on top of spaghetti.
i wanted that watermelon.
i HAD TO HAVE that watermelon.
or just A WATERMELON.
so i drove the 5 short blocks back to costco,
and searched my parking spot.
no watermelon.
at which point i flagged down a cart gatherer person and politely asked him,
"you haven't found a watermelon rolling around the parking lot by any chance?"
he had not.
but would check the customer service desk.
by golly, they had found one!
and put it back, not knowing whose it was.
and i could go right on in and gather it again for myself.
at which point i even MORE POLITELY asked him if there was anyway someone could bring one out for me instead?
"see, i have a newborn and a toddler in the back,
and a 4 year old i need to pick up from preschool in 13 minutes?"
{BIG SMILE}
he took mercy,
bless him,
and i gladly explained how to pick out a watermelon.
"hollow like your chest, see?"
yes, i really did.
and he really did bring it right out to me.
at which point both max and chase started melting down.
so i called our luck plum run out,
and called a friend to bring brennan home with their son,
i securely placed my watermelon in the front seat.
{and may have even considered strapping it in with a seat belt},
and i drove home so satisfied that we'd be eating watermelon for the rest of the week.
:):):)
Posted by Em at 3:57 PM 4 comments:

while i was nursing...{tramp chips} 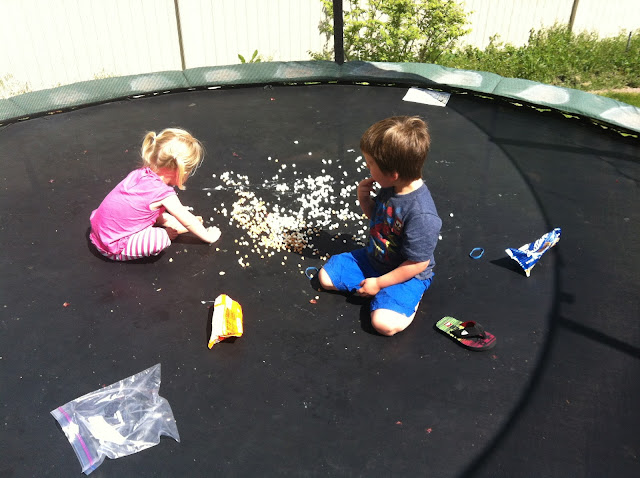 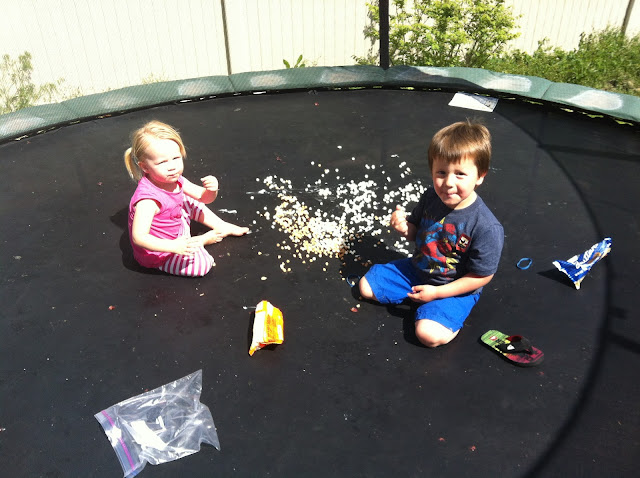 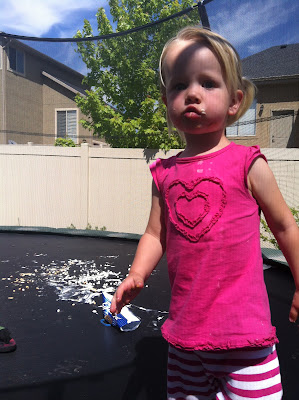 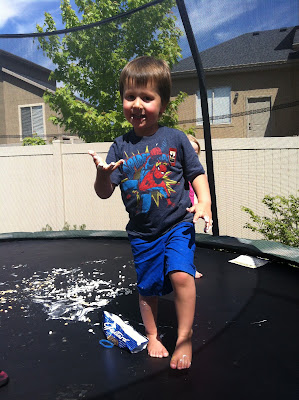 brennan snuck the first bag out without me batting an eyelash.
max came whipping through the backdoor and grabbed something blue.
like a flying pink flash.
in,
then out.
from what i thought came from the recent costco loot i had left on the counter so i could hurry and feed chase.
after she ran outside with it i kept trying to remember what i had bought that was metallic blue.
but they were outside and no one was fighting.
leaving chase i inside happily nursing.
so i enjoyed the quiet and marvelled in my beautiful nursing life.
about 10 minutes later i found them.
on a hot tramp,
with hundreds of my favorite peanut butter and white chocolate chips,
melting.
they were picking up each melted morsel and enjoying their delicacies.
at first i tried to salvage what i could.
packing as many melted chips back into the reese's peanut butter chip bag as i could.
it didn't hit me until i brought them inside that our tramp is filthy,
and of course i had already licked my fingers several times in the cleaning up process.
what did i really plan to do with all of these melted chips anyway???
i left them on the counter in mourning,
scolded the two culprits calmly {really, i did. it was a good day. go me.}
b/c on the way home from costco i was just thinking that they hadn't done anything naughty while i was nursing in awhile,
and maybe we were beyond that.
and i just kept thinking "this is funny."
hasty
hasty
tasty:)
Posted by Em at 3:01 PM 1 comment: 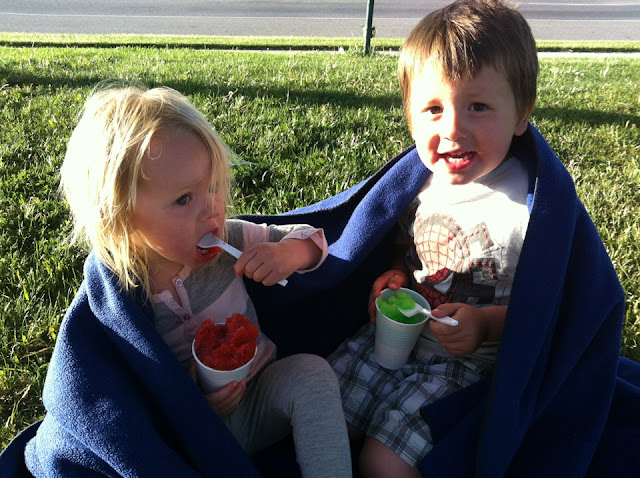 hot all week,
and we decide to hit our favorite shave ice shack on the most windy,
winter of cold days this month.
AND
i forget all of our coats.
good thing our emergency blanket was actually in the trunk for once.
we lasted about 5 minutes on the grass until the kids started uncontrollably shaking
before we called it quits, ran to the car, and blasted the heater to 80*.
i felt a little selfish with my heated seat in the front as a bonus,
but hey, they DID have the blanket.
soon enough i'll be whining about the heat.
but for now,
i just can't wait to be smelling like coconut sunscreen,
eating my blue Hawaiian shave ice at Lani's in the grass.
ice cream at the bottom.
extra blue Hawaiian on top.
Posted by Em at 8:35 PM 1 comment: 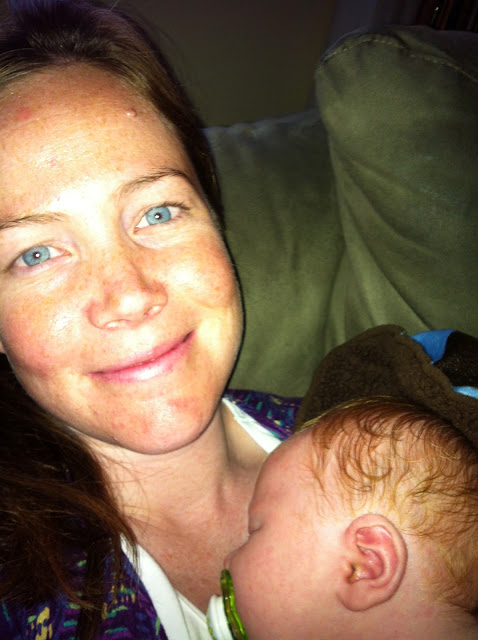 sundays.
where chase and i send our people off to church for three hours,
sit at home cooing over each other,
get bubble baths in the sink,
{him, not me},
take UNinterupted naps,
read books,
and get the longest, hottest, UNinterupted shower to my heart's content.
{me, not him}
at least until the end of may.
or whenever we decide to resurface.
heaven.
"oh i'm easy! ahhhhh ahhhh ahhhh ahhhh,
easy like sunday mornings..."
Posted by Em at 8:25 PM 1 comment: