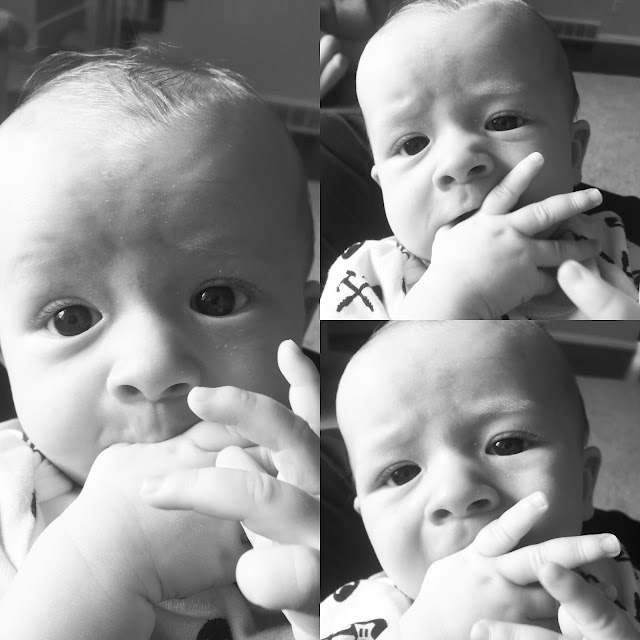 i'm not giving up on binkies yet!!!!
eek.
i've said it before,
and i'll say it again.
the fourth baby changes all the rules.
Posted by Em at 5:32 PM No comments: Links to this post

i think this means we survived september. 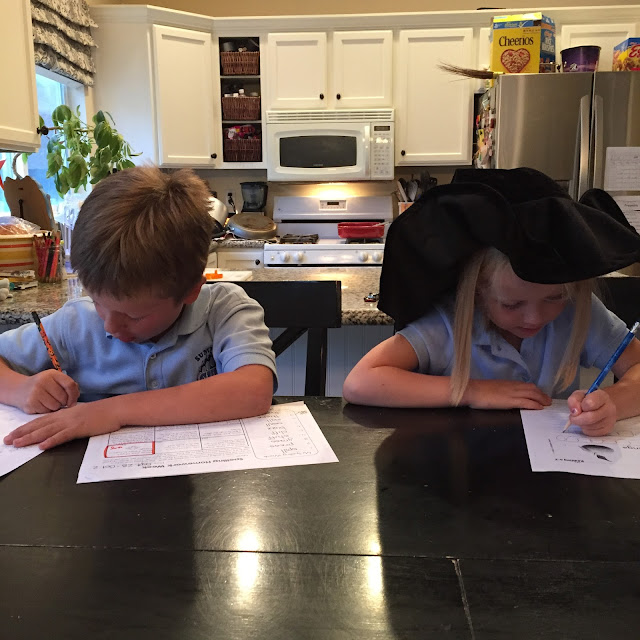 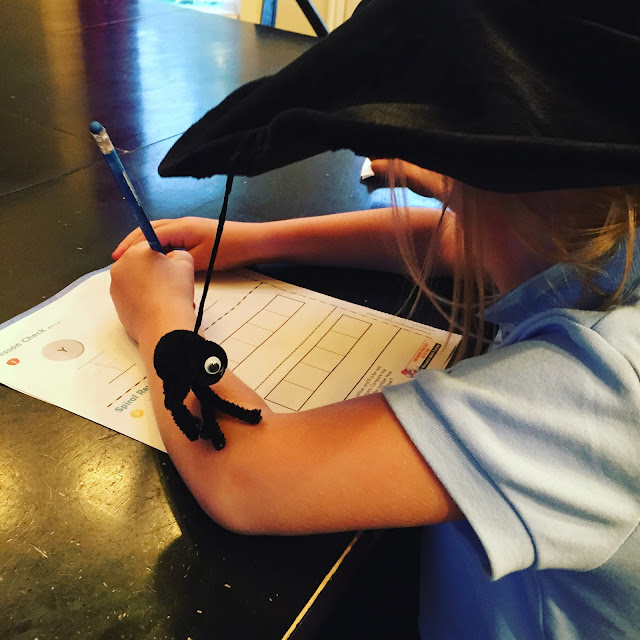 trade the hat every 5 minutes.
might be my most genius thought ever.
Posted by Em at 3:58 PM No comments: Links to this post

because i don't want them getting an inch and taking a mile or something responsible like that. 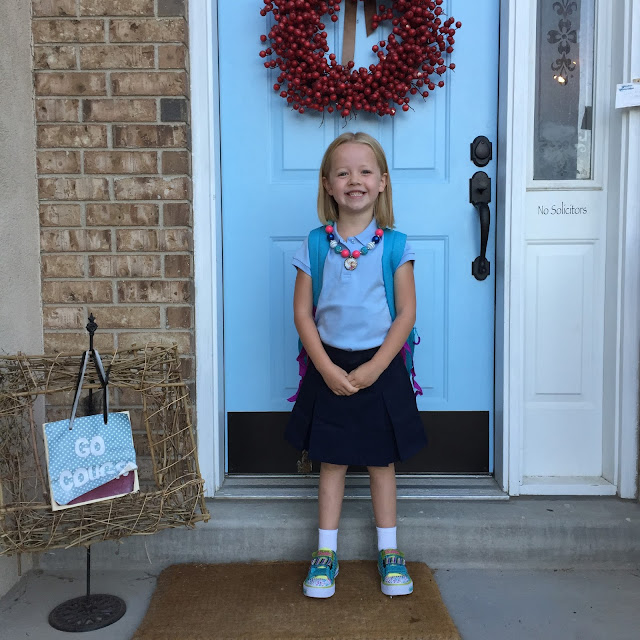 {she didn't even cry. i have planned for two years for her to cry.
because she has always cried on the first day of anything.
also birthday parties. she cries when we drop her off at birthday parties.
but she didn't cry on her first day of kindergarten. and it was amazing.
i remember driving home thinking i'm so happy that she's so happy
on her first day of kindergarten. and then she came home and told me she didn't want to wear the frozen necklace to school anymore. because it bit the back of her neck all day long.}
...
max isn't currently sleeping.
this is crazy to me.
she was my BEST sleeper as a baby.
{dean has slept in longer stretches than her earlier, but he is a horrible car seat sleeper, so max STILL wins.}
she would sleep anywhere.
she was like a bird.
all you had to do was cover her up,
and she was out.
it was amazing.
you could transfer her from her crib to her car seat and back to her crib,
and she wouldn't even open one lid.
we would take her to movies.
out to dinner.
to appointments.
any time of the day!
and i never had to worry about having a fussy baby with me.
i didn't even really need to feed her to keep her happy.
she would take giant naps twice a day and sleep from 7:30pm-10am as she got older.
every
single
night.
and she NEVER cried.
like NOT EVER.
i'm not kidding,
and i know you don't believe me,
because i wouldn't believe me,
except for i saw it with my very own eyes.
also, i have witnesses.
not even for her shots.
the nurse for our old pediatrician STILL comments about it
when we see her because she couldn't believe it either.
she was a dream baby.
the ones you only hear about,
and i swear to you she was my gift from heaven for not killing brennan,
who literally screamed for 16 hours a day.
god bless baby max because we probably wouldn't have had any more kids if it hadn't been for her.
so this amazing max,
is a worrier.
when she's laying in bed at night she yells down things like
"are you guys still there?"
"did you lock the doors?"
"i saw a shadow!"
"i'm scared!"
"i need someone to lay with me!"
have you ever read llama llama red pajama?
or any of the junie b jones books?
well they are max
to
the
t.
we've taught her to look at books while she's falling asleep.
put water bottles by her bed.
set up multiple night lights
shakies
lovies
barbies
baby dolls
books.
and the dang dodgers hello kitty animal the plowman's gave her {go giants!!!}
it's like a full on flea market in her bed at night.
these are the things she requires to fall asleep.
also brennan not being in there.
well now,
she wakes up in the night.
turns on ALL of the lights.
which wakes up chase.
who wakes up us.
so we put them all back to bed,
turn off the lights,
and then some awful repeat button gets pushed
and this process gets repeated in 1 hour to 3 hour cycles all night long.
i'm known as a night owl.
i now go to bed at 10pm every night.
sometimes 9:30.
'nuff said.
we've tried every piece of advice anyone has to offer.
rocks to take her bad dreams
{although she doesn't complain of bad dreams
because i swear this child isn't in a deep enough sleep to have dreams anyway--
but like i said, we're trying everything.}
telling her to say prayers when she wakes up,
telling her she doesn't need to come in and wake us up.
spending more alone time with her during the day
spending more alone time with her at bedtime.
benedryl
singing the sound of music.
you name it,
we've tried it.
and i'm thinking that maybe
it just can't be fixed.
and this morning,
while sean and i were laying in bed,
he started laughing,
and i was all talking in desperation like,
"we did everything right!
we taught them how to sleep in their own beds!
we didn't spoil her as a baby!
healthy sleep habbits!
no milk in the night!"
and he was all,
"i know, that's why it's funny."
and then i was all
"i get why people forget about doing things the right way with the fourth,
because by then you know none of it matters anyway."
and then i heard chase banging on the wall,
because by this point i had put them both in the same room
hoping THAT would help.
desperation folks.
it leads you to do CRAZY things.
like thinking two little kids will go to back to sleep at 6:15am if you put them in the same room MAYBE????
so of course that didn't end well,
and i ended up putting chase in time out at 6:42am for talking.
because i don't want them getting an inch and taking a mile or something responsible like that.
and i'm pretty sure that's when i decided that i should send chase to preschool today,
even though maybe he still had a lingering cough. 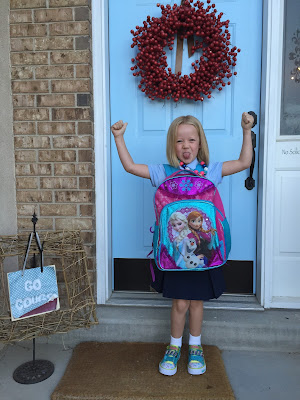 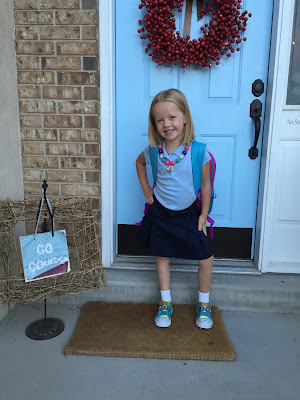 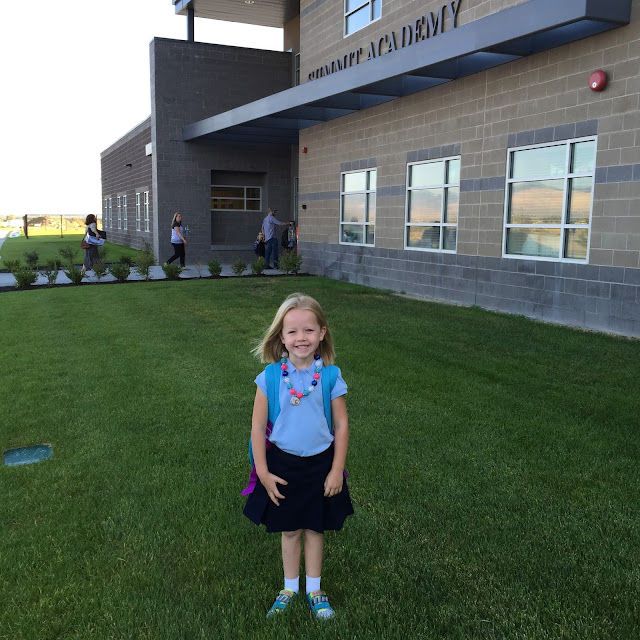 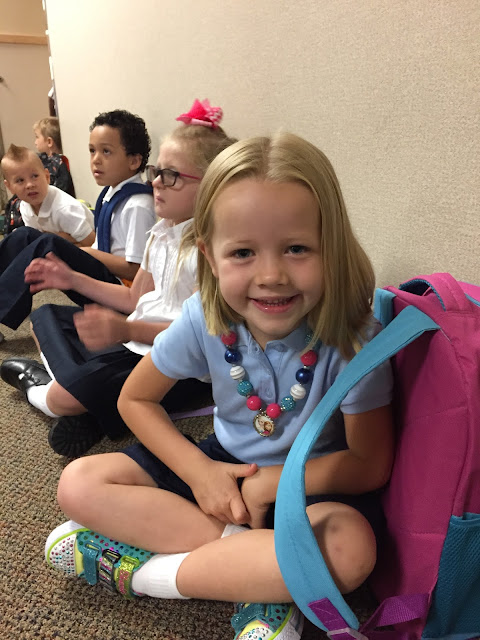 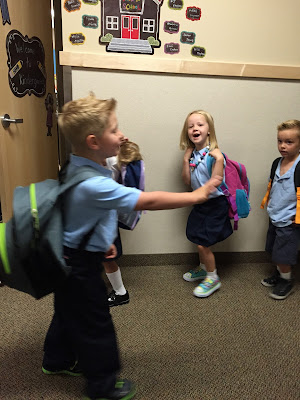 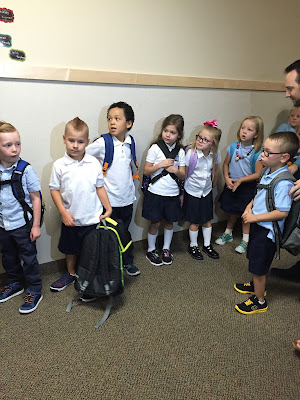 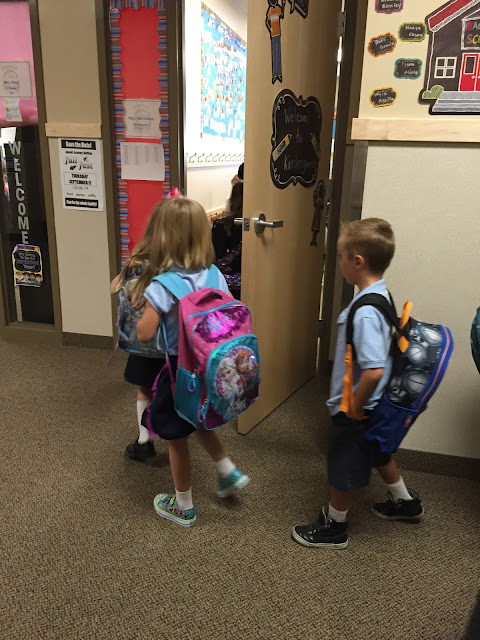 and do you wanna know what they're doing
RIGHT NOW
upstairs in their rooms?
playing "nighttime".
where they lay in their beds and pretend to sleep.
they turn off all the lights so it's dark.
and close the blinds so it's dark.
yep.
i know.
how 'bout THAT to give a gal a good laugh.
good grief.
i love these crazy kids.
Posted by Em at 8:57 AM No comments: Links to this post

the drawer in the coffee table was NOT in fact stuck! 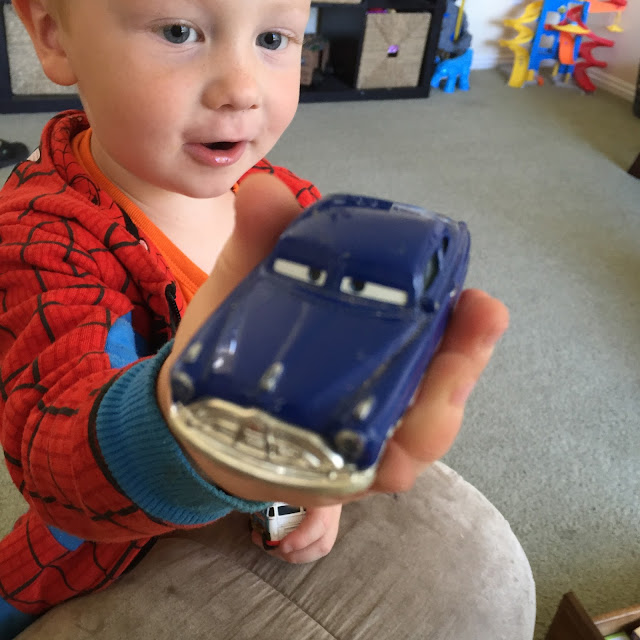 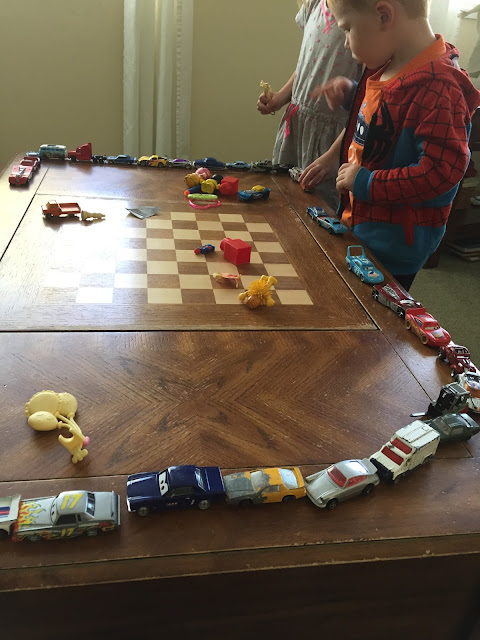 it's like christmas day over here folks.
and chase takes inventory of where each one "his" cars
have moved around throughout the house all the live long day.
don't you DARE try to take his prized three:
the king,
the announcer,
and "dirty" mcqueen
{it has mud painted on him--no coconut and lime added here}.
not ever!
brennan almost lost an arm over the ordeal.
ye be warned.
arg. 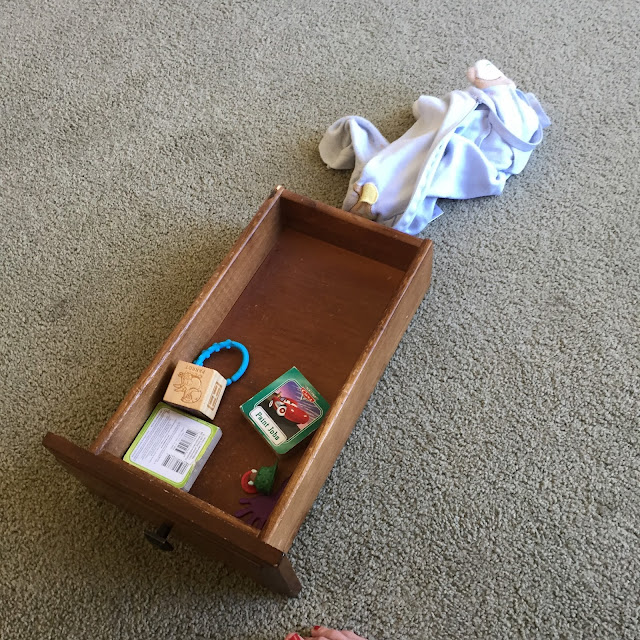 {this moment brought to you by chase ripping the drawer out of the coffee table
while i was nursing...}
yep:)
Posted by Em at 9:55 AM No comments: Links to this post

just call us the smurf's 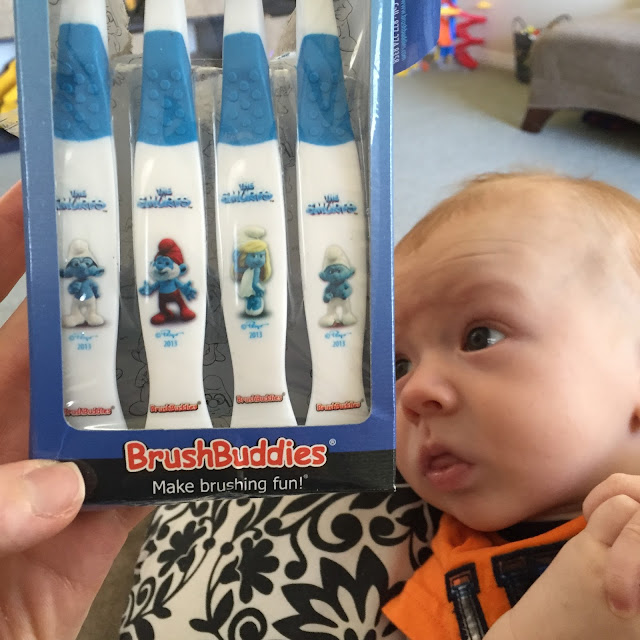 my family in toothbrushes.
and smurf's.
sean's mom gave us these.
b/c she said it was us.
i LOVE stuff like this.
little sus's that aren't really anything,
but they just fit you.
brennan picked the angry one.
he thinks the face is so funny.
we assigned chase the glasses guy.
he has since switched to papa.
so now i don't have to squint at 7:30am to figure out who's is who's.
that chase. smart man;)
Posted by Em at 10:01 AM No comments: Links to this post

letters to Emily {German Flea Market, America not Being #1, and thoughts on Smith & Bear}

Hello Mrs. Beautiful Emiline Gibson!
I am writing you a letter letting, in response to your amazing letter you wrote me.... Oh how funny! Shaving cream, spider dreams, popsicle apologies. You got it all in there. I must say, you are such an inspiration to me. You definitlely know how to endure. I am so proud of you. Germany is great, it's all boots and scarves around here. Full on fall time. Still nice but sweater weather. these pictures are from the Heidelberger herbst. It is a HUGE flea market and so much fun. They have good food and fun things to buy. I didn't actually mean to send all of the ones I sent but it just all downloaded. I started taking a german course on Monday and Wednesday nights. It's been really fun, other than riding my bike home in the rain at night. Luckily it's only an 8 minute bike ride. I met a really cute Russian girl that is so sweet. Her name is Alla. Of course I am only brushing the surface with all these updates, because we all know there is deep and profound things happening inside most people. Especially innocent and anxious mothers full of anxious love. (a line from a song) I have been able to relax and reflect since I have been, now what I call "home", which is so strange to me. If you don't want to confuse your self just stay living in the states for the rest of your life. Because once you live over seas you are never the same. Your perspective on your home country is forever changed and you long for that sweet innocent memory of America being #1. Not that it isn't because it is great, but I don't think there is a competition for it anymore, not with me anyway.

As I wake up Smith everyday, I feel such immense gratitude that I get to be the one that does this for him, of course that is buried down deep inside when my alarm goes off at 6:30, but once I walk into his room and pick him up from his bed and dress him, I feel an overwhelming sense of gratitude. How did I get so blessed to have this sweet boy. Who is always happy. He is such a light in my life. Bear's cast comes off in a couple weeks, and I cannot tell you how ready I am for his cast to come off. I want to get a saw and saw it off sometimes!! He keeps saying, "I'll be big when my cast comes off. I will run really fast when my cast comes off." It's really sweet and sad at the same time. I cannot wait for conference. like, CANNOT. WAIT. I love conference so much. The news of elder Scott dying was so sad, because his talks are usually some of my favorites. Anyway, I love and think about you often and I hope you are happy and you have a fabulous fall!!

love you
forever
and a day,
beth jane.