letters to Beth {a wizard, dressing, and milk flowing} 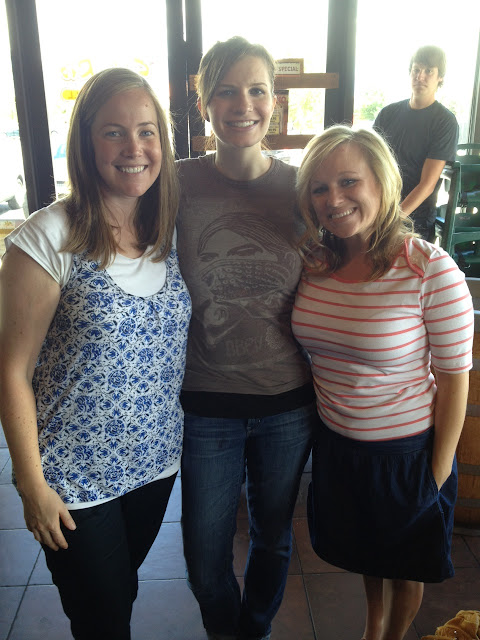 OH BETHY! i just got home from having lunch with courtney and megan, and we were all just so sick with heartache that you weren't there with us. sean couldn't get over how you and megan have the exact same laugh. i'm DYYYYYYIIIIINNNNNGGGGG without your gorgeous smiling face! when can we skype??!!??!!?? pleeeeeeeeeeeeeeeeeeeeeeaaaaaaaaaaaaaassssssssssssssseeeeeeeeeeee, let's skype:) sunday???? i started talking about how the last time we tried to skype i had just sat down to nurse chase and the milk was flowing so i couldn't get up, and then i realized megan's boyfriend was looking at me all uncomfortable, and that i was officially that weird married lady that talks about weird things in front of single guys. TRAGIC. megan had on the cutest skirt that courtney and i were dying over. courtney's baby is the cutest little thing with bright blonde hair and blue eyes. i was so excited to be there with them that i could hardly even eat. you know how i get nervous around big groups and loose my appetite. we categorized everyone into hobbits and elves like the good ol' days and low and behold it was decided that courtney's husband is a wizard. A WIZARD! so very exciting. max was declared an elf, as well as courtney, the rest of us hobbits, except for brennan who i think may be borderline dwarf, but we'll always tell him he's a hobbit nonetheless. can't wait to do this again with you there too. megan said your mom is coming to town next week, and i made her promise they would call me so i could go down, give her a hug, and stand with her in somebody's kitchen while she teaches me something profound about life.

missing you as always,
emily
{aka PIP}.
Posted by Em at 2:27 PM 3 comments: Links to this post

Email ThisBlogThis!Share to TwitterShare to FacebookShare to Pinterest
Labels: letters to beth

the secret of bees 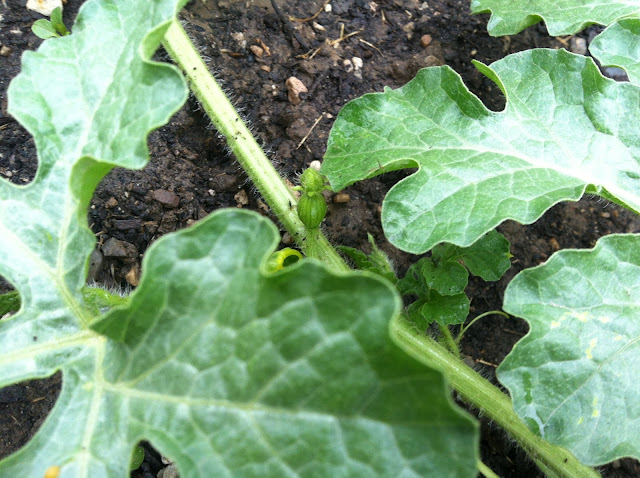 {watermelons start with their stripes. imagine that.} 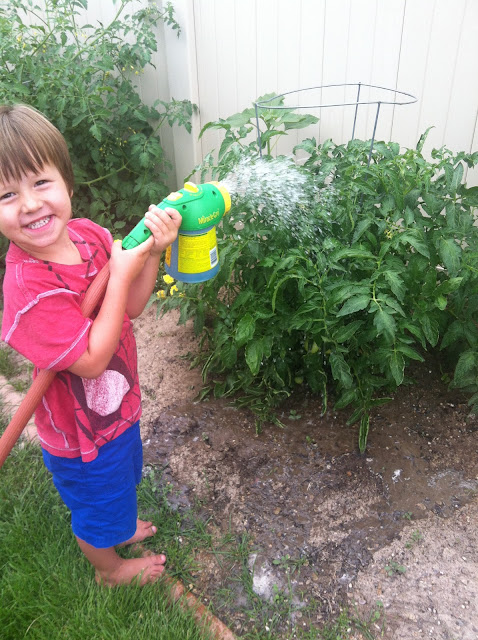 .......
it appears the bees are good listeners.
b/c we officially have watermelons AND pumpkins growing.
{SO EXCITED}
and we are also growing three fine human beings.
sean and i.
amazing.
the human beings.
all three of them.
it just amazes me how they start out so small.
take SO much time and effort to grow.
nurture.
and then one day they're not as small.
they're bigger.
like they grew overnight.
taller.
more defined.
longer hair.
brennan telling me he's brave for PG "woovies,"
{movies}
even though i think some are too scary.
and i just wish for time to freeze.
to pause this moment in our lives.
with the garden out back.
rows of corn,
pumpkin patches,
tomato plants growing.
the kids squealing on the tramp.
brennan chasing max until she cries and laughs all at once.
chase chuckling when i tickle his chest.
smiling at me with his baby blues.
trips to get shave ice before bed.
max only referring to herself as a mermaid,
always shouting out the "love him!!!" line in a very dramatic fashion
{head tilted}
when she watches the little mermaid
{where king Triton finds Ariel lusting over her life size sculpture of prince eric.}
and brennan not responding until you call him "spiderman brennan."
running outside to see birds flying in a V,
and helicopters soaring overhead.
the impossible feeling of exhaustion when the day just won't end.
it's all like a dream.
but it's not.


i'm just so glad it's not:)
{although, i wouldn't mind a little more dreaming where i am actually asleep.} 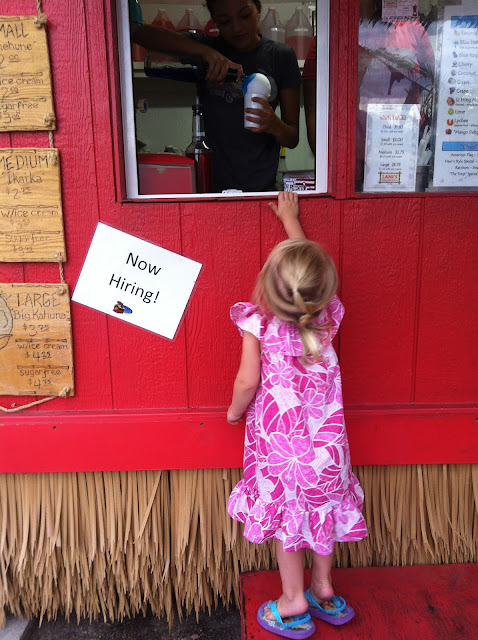 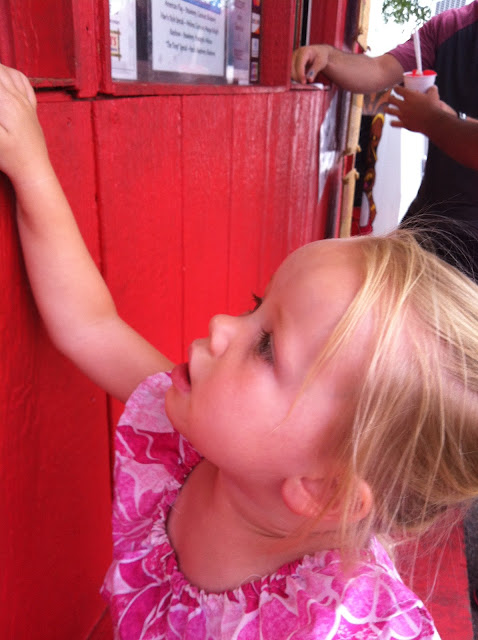 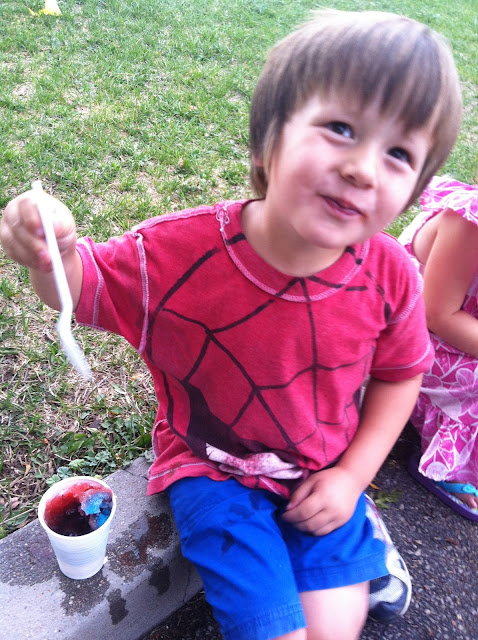 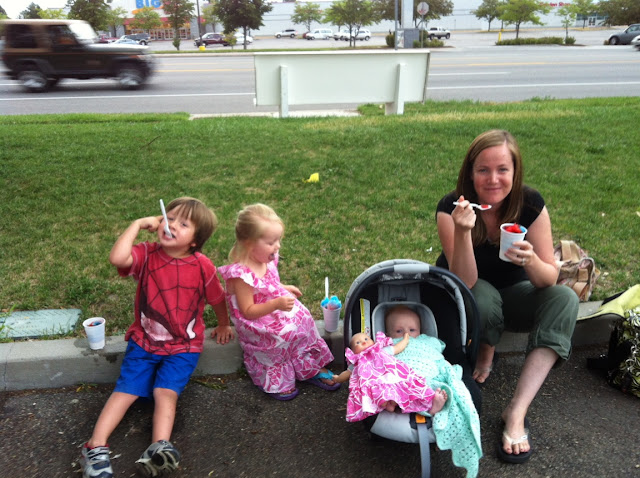 Email ThisBlogThis!Share to TwitterShare to FacebookShare to Pinterest
Labels: in the garden, motherhood 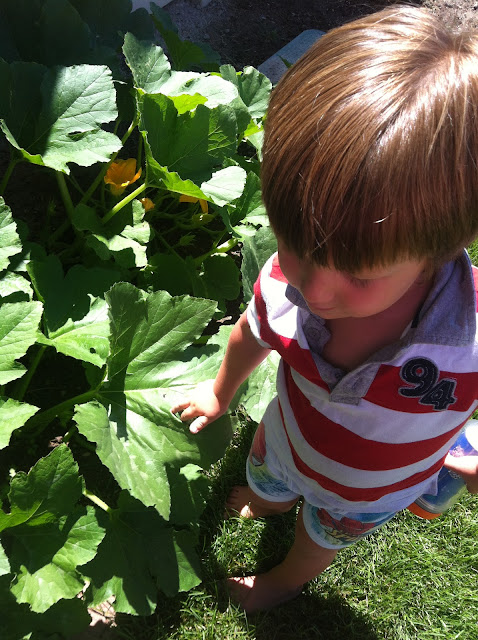 the pumpkin plants started flowering this week.
maybe last.
whichever.
{they only open themselves to bloom in the morning. smart.}
max told me the big leaves were chairs.
and then she sat on them.
and looked up at me all confused like,
"why am i in the dirt?"
brennan used his hands to hop on them like frogs.
i've never been so excited to see bees buzzing around my yard.
pollinate bees!
pollinate!
:):):)
thank you kindly.
{and the sunflowers are getting close to clearing the fence.
oh happy day, i love to watch my garden grow!} 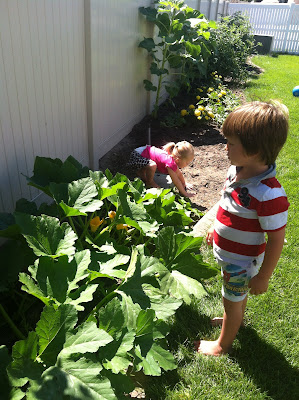 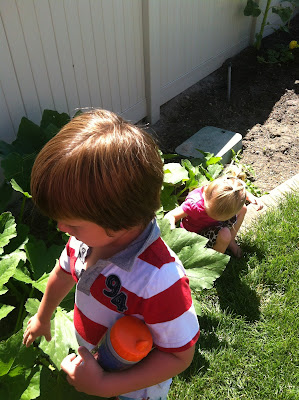 Email ThisBlogThis!Share to TwitterShare to FacebookShare to Pinterest
Labels: in the garden

glitter in the air 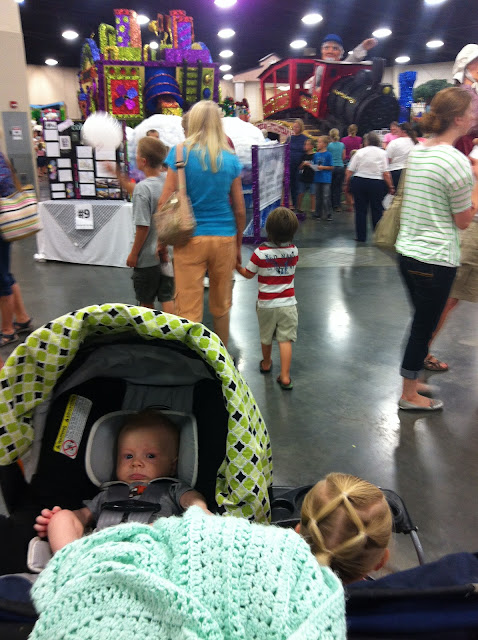 the
24th of july
{aka Pioneer Day}
is a big "to do" in utah.
i dare say it's a second 4th of july.
fireworks,
parades,
family
and
BBQ's.
all to celebrate the pioneers coming into the valley of the Great Salt Lake back in 1847.
church communities and businesses build floats for the parade,
all broadcast on local television channels.
like the macy's thanksgiving day parade.
but in july.
it's quite the spectacle.
and one of my favorite summer traditions.
you can go to the preview party the week before and vote on your favorite floats.
andrea's float was there.
SO PROUD:)
and second to her's being my favorite was the ice cream float.
where we got to sample free soft serve ice cream.
winner for my kids.
minus max who was upset that hers spilled on her skirt,
and then decided she didn't want any of it at all.
{wah, wah, wah}
more for meeeeeeeeeee:)
chase sampled his several hours later...you know...
check out the CTR oreo,
{for "Choose The Right"--classic Mormon saying}
and the sliced caramel apple dipped in sprinkles.
no detail was left unattended.
the rootbeer float even had bubbles spewing out of the top.
AMAZING!
if there was one theme that all the floats had in common,
it was
GLITTER.
and i'm a girl that is fond of glitter.
{oh how glitter reminds me of my cheerleading days}
everything sparkled.
it was BEEEE-UUU-tiful.
i can't wait to see them all shining in the sun
next tuesday morning.
from the comfort of my family room couches:)
yet another reason why i love living in utah.
AND
it's a state holiday,
so sean gets the day off of work.
bring on the BBQ.
and swimming.
and cotton candy.
and chocolate dipped cones.
and snow cones.
and sunscreen.
and flotation devices.
and sleeping in {child willing}. 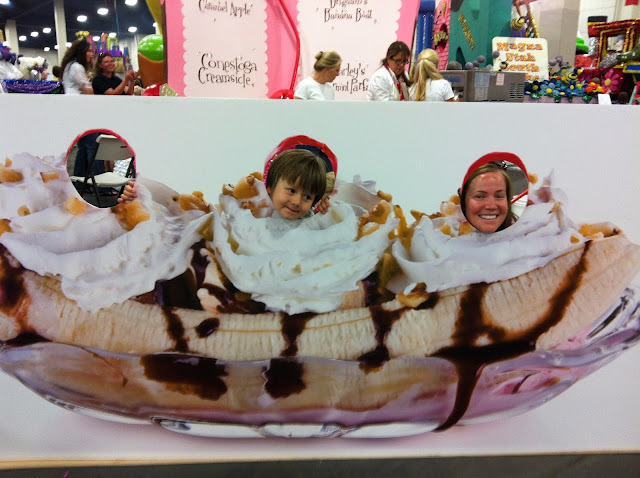 {max was standing next to brennan above.
she refused to put her little face in its designated banana split whipped cream spot.
or Marciano cherry spot. whichever.} 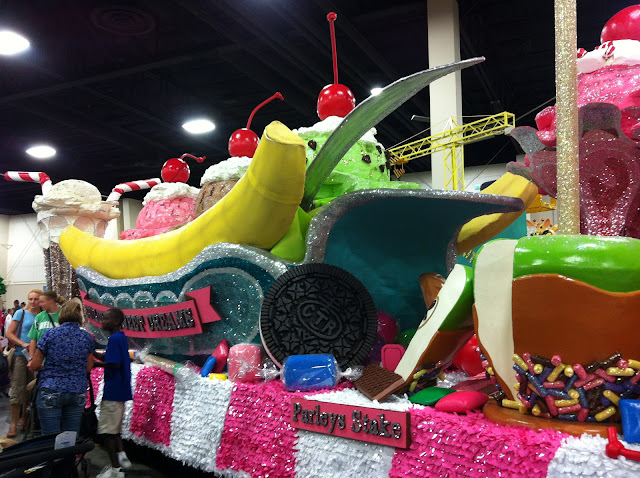 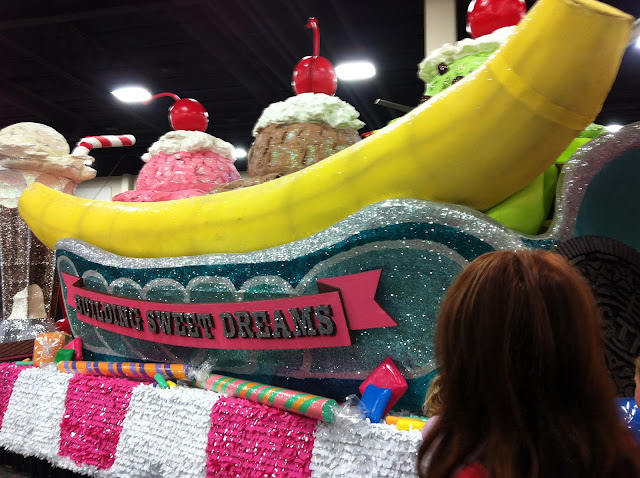 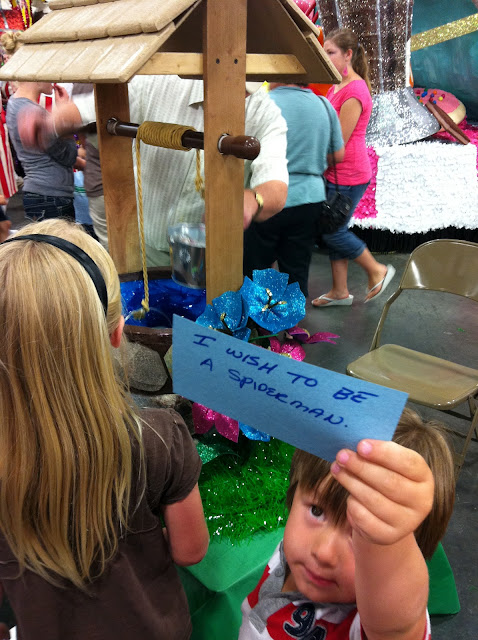 the wishing well.
where brennan wished to be spiderman.
love him. 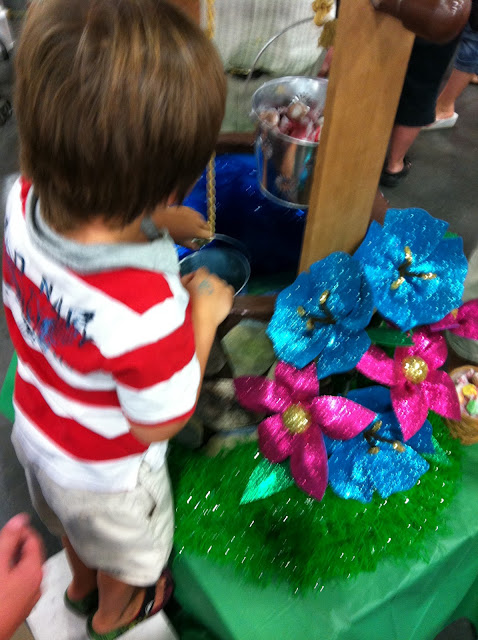 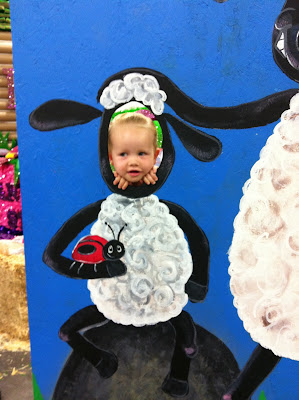 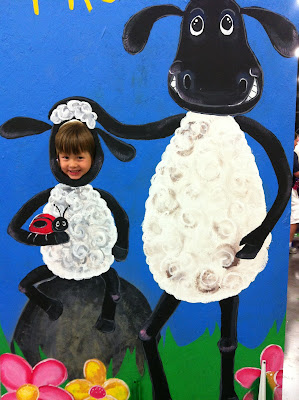 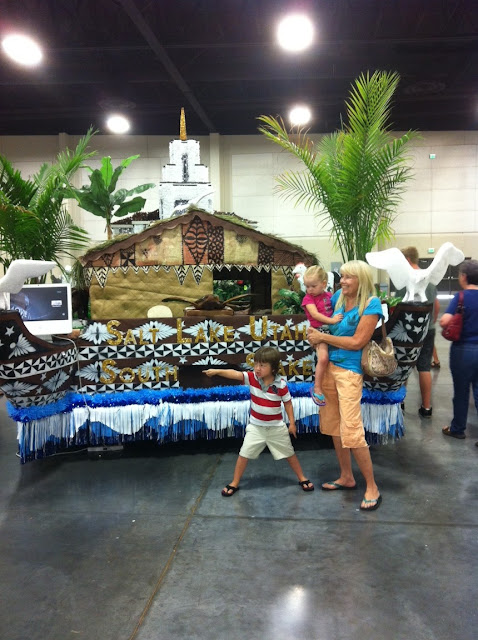 and then we said ALOHA,
as in goodbye.
and everyone went home to take a nap.
me included.
is it next tuesday yet??!!
Posted by Em at 3:09 PM 2 comments: Links to this post 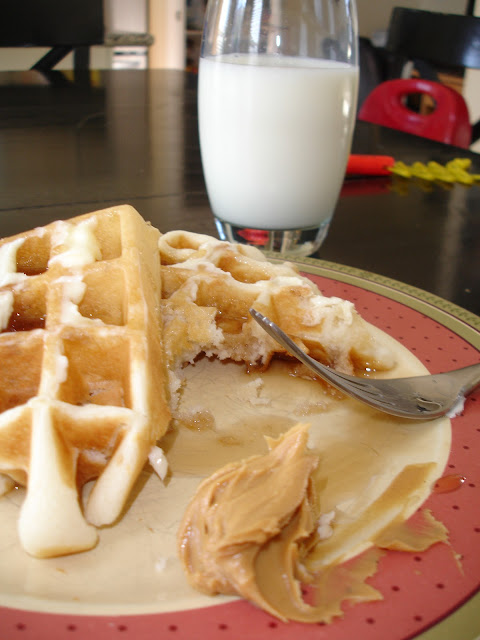 Email ThisBlogThis!Share to TwitterShare to FacebookShare to Pinterest
Labels: breakfast 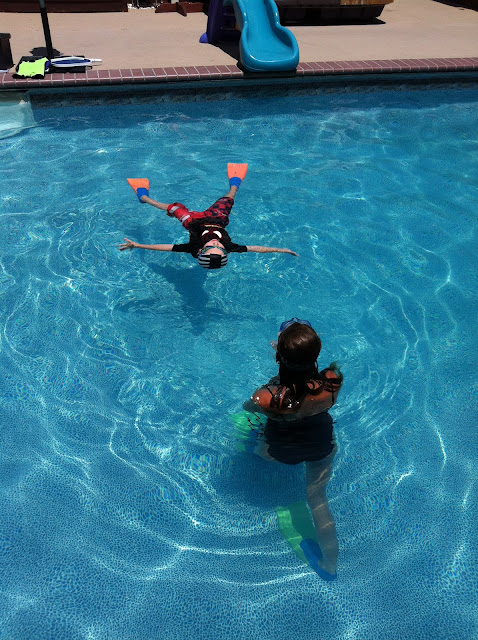 my car battery died twice today.
the second time was its last.
i am now the proud owner of a brand new car battery.
thank you carl the car guy for installing it for free.
you are the best.
and linsey for jumping my car this morning.
i love you pioneer woman.
and richelle
{insert MOST AWESOME SWIM TEACHER on the planet here}
for waiting an extra fifteen minutes for us to have our car jump started
to get to swimming lessons late.
bless her.
boo on the pool cover for breaking after lunch.
we are sad we couldn't get in and swim the second time.
little max just didn't understand.
and it was 68* tonight.
in july.
my mom offered me a blanket and a coat.
i turned her down both times.
i just wanted to enjoy shivering.
in july.
it was wonderful.
cold, crisp, and wonderful.
i'm recharged for the 90's again now.
cue angel choir singing here. 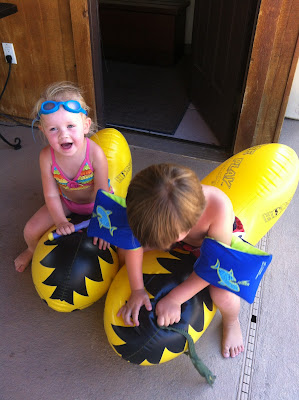 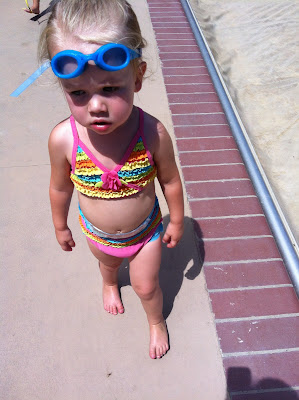 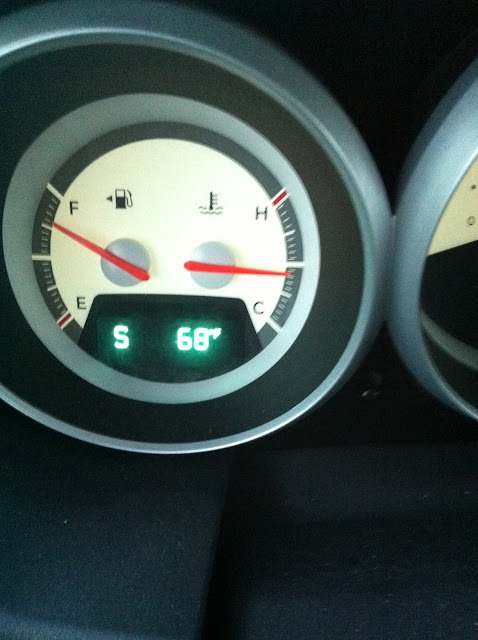 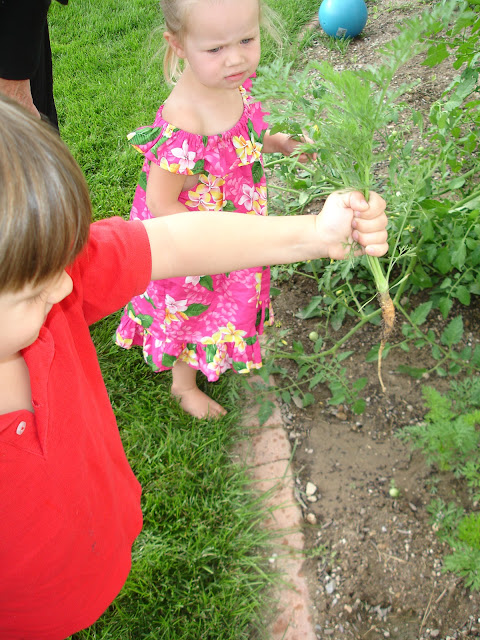 {max's face says it all.}
that's it?
brennan fell flat on his bottom after he yanked our first carrot from the ground tonight.
so much gusto:)
i've never grown carrots before.
so not knowing about things of this matter i called my dad.
he told me that the tops are supposed to be 8-10" tall when they're ready.
and that it couldn't hurt to just pull one out and see if it was ready.
i'm sure he told me more, but my memory is just not so good anymore.
from the looks of it there is more to it than just carrot top height.
so after we gave that mini carrot a good looking over,
i stuck it right back from where it came from.
and felt pretty happy that i finally knew what was going on under all of that dirt.
actual orange carrots growing.
looks can be deceiving.
lesson learned.
Posted by Em at 8:41 PM 4 comments: Links to this post