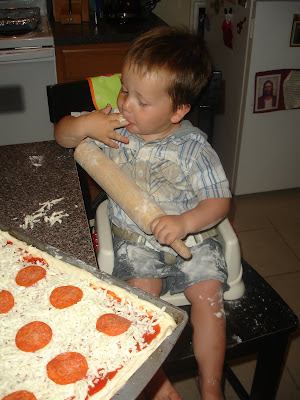 friday.
the pork loin put the pepperoni on.
he also snuck some cheese.
and rolled himself with the rolling pin from top to bottom.
max slept on shannon.
the doc brought home his first real paycheck. 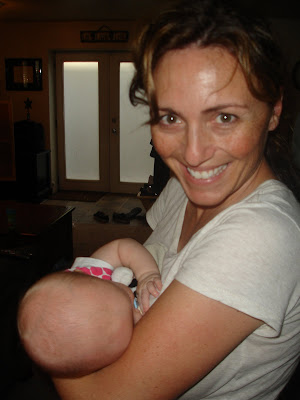 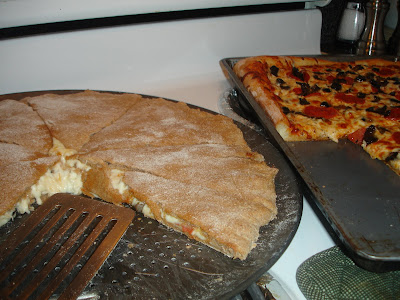 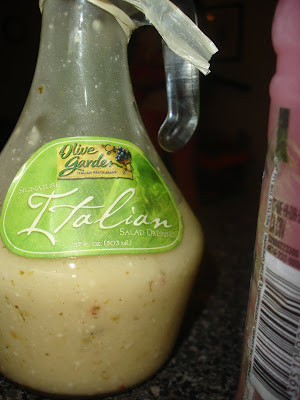 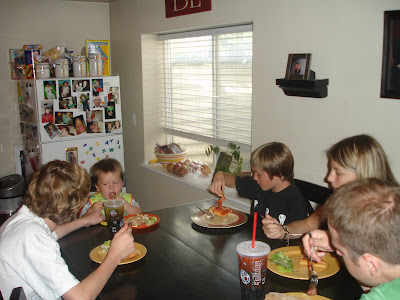 cousin johnny showed up with what he claimed were 6,000 hockey trading cards.
to be organized and divided.
i loved listening to them talk.
shushing each other b/c "the babies are sleeping!" 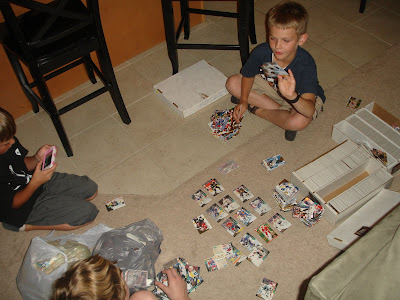 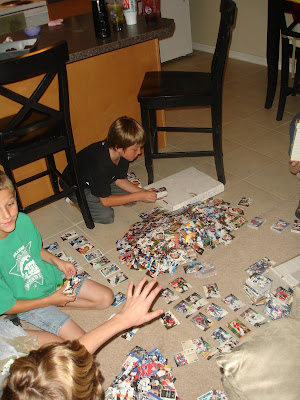 sat on the couch with the doc,
played laser tricks on the boys.
"hey guys, my cards light up!" 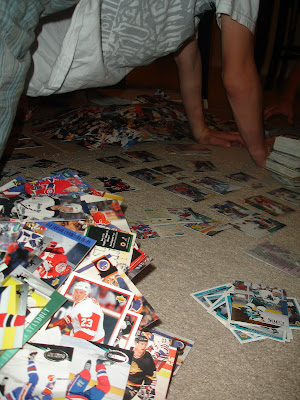 realized all children's play toys are made with the same 4 colors. 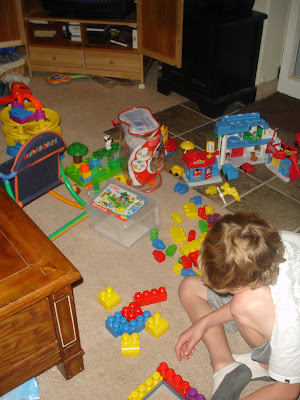 the party is over.
the doc is doing dishes.
i'm exhausted.
is it time to do it all over again yet?
Posted by Em at 10:15 PM 4 comments: Links to this post

if you're gonna spew, spew into this. 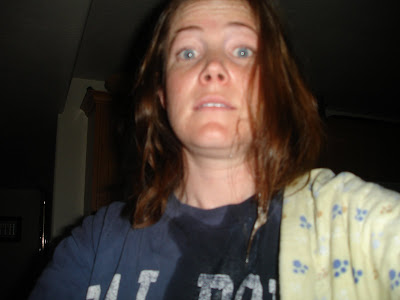 i fear there is nothing cute about this picture of me.
not the angle.
not the outfit.
not the hair.
not anything.
still, i must.
b/c at 6am this morning, max had just slept.
like really slept.
i had milk.
like REALLY had milk.
i was happy to feed her.
and she was a LITTLE too excited about eating.
so she gorged.
and gorged.
and gorged some more.
and i let her.
then, when i went to burp her.
a faucet of spew came forth.
like the hoover dam.
or something.
my entire left side was annihilated.
in 3 pukes.
drenched through all layers of clothing.
i wish i would have had wayne's mini spew cup.
although, it would have worked about as well for max as it would have worked for their friend in the backseat of wayne's teeny tiny car.
still, it made me laugh.
that picture is just plain embarrassing.
someone, please censor me.
...
max has mastered her oatmeal. 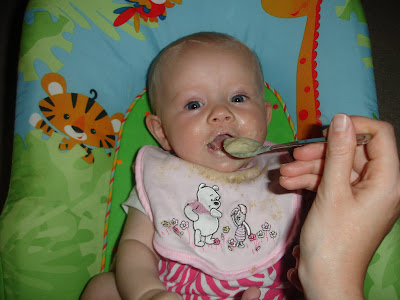 and i figured out a tighter swaddle.
so we're back to the swaddle band-aid.
and peace is restored.
until she gets strong enough to break free again...
Posted by Em at 6:46 PM 5 comments: Links to this post

maybe we already are.

these are the days that make up for all of the hard ones. 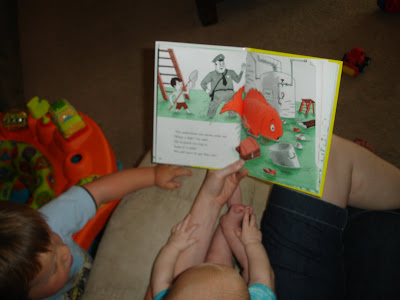 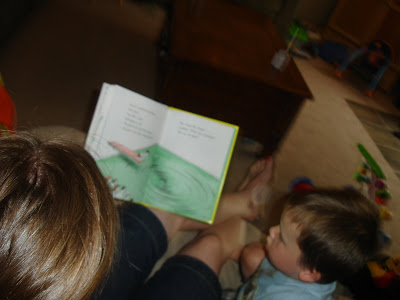 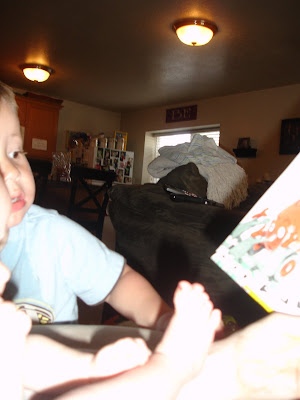 this is when brennan found the camera. 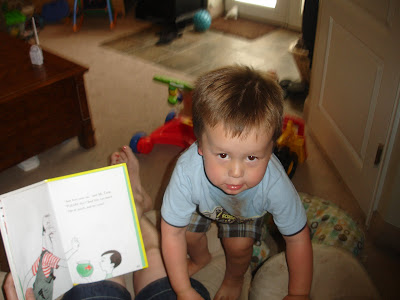 and wanted to take a picture of max and me. 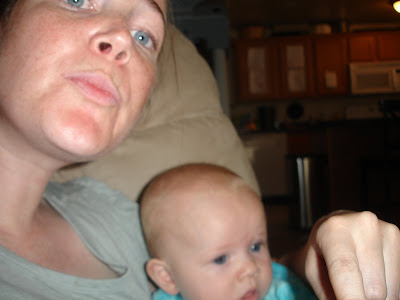 i wasn't puckering.
i was saying, "push it right there."
but only made it to the "p" in "push" before he figured it out himself.
...
max is too strong for the swaddle at naps now.
we wrap her up, she goes right to sleep.
then when the sleep cycles switch, Houdini gets her arms out.
then they flail.
binky pops out.
baby awake.
not the toy.
real life.
or was that baby alive???
panda binky, work.your.magic!
let her cry it out with the panda when she woke up halfway through her mid-day nap.
an hour and 15 min of crying and 10 trips back to her bed to pat her bum, tell her i love her, and to go "night, night," and it was time to eat again.
that went well.
guess we'll try again tomorrow.
as opposed to brennan, i actually can't hear her crying in the front room.
but for some reason,
it hurts more.
weird.
she'll learn.
and we'll all live happily ever after.
or maybe we already are.
Posted by Em at 5:12 PM 6 comments: Links to this post 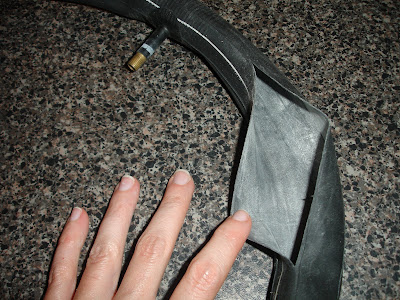 too much air.
tube was off its track.
went to staats for a fresh one.
happy the old one was shot.
been pumping it up everyday for two weeks from a slow leak.
they said "thorn resistant"
i said "YES PLEASE." 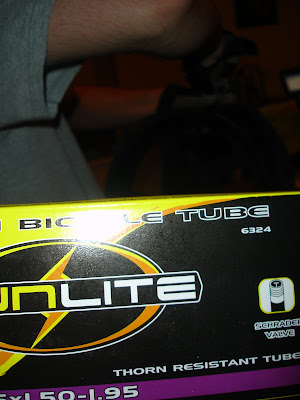 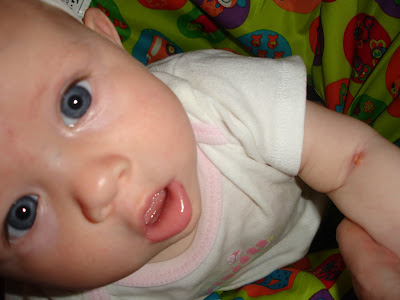 i spent the better part of my afternoon at the pediatric dermatologist.
waited forever.
enjoyed the elevator music.
we were early, they were running late.
in the patient room we waited some more.
then magna cum laude hot shot walked through the door.
he did NOT shake my hand.
he did NOT introduce himself.
he did NOT ask my name.
he did NOT ask max's name.
she was referred to as "the 4 mo. old."
and his hair was too spikey.
i did NOT like him.
not b/c of the hair.
i started looking for things that irritated me extra after awhile.
max smiled a lot at him.
i tried to give her the **nod wink** to begin some puking and pooping on him, but she continued smiling.
bless her.
so magna cum laude hot shot asks me,
how the bumps began on "the 4 mo. old's arm."
"well, it started as..."
and then he cut me off.
"it's a pilomatricoma, blah, blah, blah...common in children...blah, blah, blah, surgery to remove, blah, blah, blah..." he says.
did i mention i did NOT like him?
can't dr. N do peds too????
what's that?
a benign tumor.
referring to primary children's dermatology,
and
referring me to primary children's plastic surgery.
b/c HE KNOWS i'm THAT KIND OF MOM
who wouldn't be able to handle him doing it in the office.
what does he mean HE KNOWS?
HE DOESN'T EVEN KNOW MY NAME.
did i mention i did NOT like him???
he google's it.
yup, looked like it.
can i leave now?
put max in her carseat.
asked for the numbers.
he ends the visit by saying,
"now when you go home and spend hours upon hours googling pilomatricoma b/c YOU'RE THAT KIND OF A MOM, i can tell, call me when you have questions."
uh-huh.
again, HE DOESN'T EVEN KNOW MY NAME.
and he said it in a jerky way.
and third of all, this is my SECOND CHILD.
i don't have HOURS UPON HOURS to google anything.
i only have AN HOUR to google it for all of my friends, relatives, and distant cousins.
so there!!!
idiot.
consult with primary children's plastics in two months
then it's under the knife.
with the fancy mucho bucko drugs.
i don't like it.
any of it.
we'll see how the consult goes in aug.
i hope we NEVER have to go back to magna cum laude hot shot ever again.
but if we do i'm bringing someone with me.
so they can see hot shot and then totally justify me.
boo hoo.
i'm being sensitive.
but really, at least call my kid by her name and pretend like she's a real person.
and use my name too.
...
NOW FOR THE UNEMOTIONAL DETAILS:
hot shot can do it, but may not get it all and will leave a big scar.
not worried about the scar.
want them to get it all.
primary's derm can do it, but may not get it all & leave a big scar.
same thing as hot shot.
primary plastics can get it all and leave almost no scar.
i like the "get it all part" best.
the end.
...
brennan is obsessed with bugs.
he points to his wrist and tells me he has a "bug bite" every day.
he did have one.
3 weeks ago.
it went away, but he claims it's still there.
we hunt for bugs, we find bugs, we love bugs.
so, big surprise, BUG'S LIFE is our latest and greatest movie obsession.
he acts out the movie and quotes the lines along with the show.
it's really cute.
Posted by Em at 3:14 PM 19 comments: Links to this post

it's plain to see 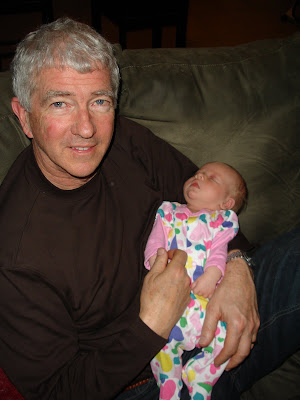 "it's plain to see i want to be like him in every way...
i'm very glad that he's my dad, and i know he loves me too."
always there.
man of few words.
easy like sunday morning.
rosie cheeks.
adorable.
charming.
...
then other man i call daddy.
brown or blue,
it's an eternal tie.
the eyes are my favorite part. 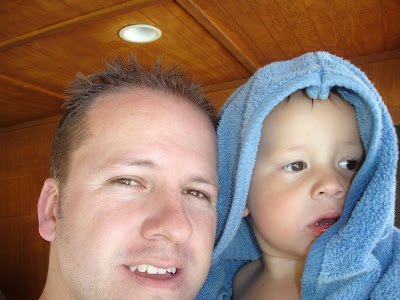 happy father's day to the dads.